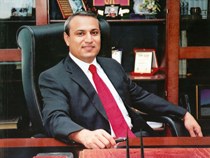 By Valerie Hopkins
A Turkish national who allegedly helped a confidante to Egyptian dictator Hosni Mubarak hide his assets in a string of offshore companies has been placed on Interpol’s most wanted list.

Ali Evsen, who also holds Albanian and Azerbaijani citizenship, has been added to the international warrant database by , accused of fraud.

Three days after Egypt announced it would indict Mubarak, his family, and Salem on corruption charges, Salem's children Khaled and Magda Salem stepped down from the directorship of an obscure Panamanian shell company and were replaced by two Azerbaijan proxies.

Less than three weeks later Salem, a former Egyptian intelligence officer, his son, Khaled, and Evsen were arrested in Spain at the request of Egyptian prosecutors on money laundering charges.

In OCCRP’s February investigation, reporters uncovered Evsen’s role at the epicenter of the asset transfer: The two Azerbaijani citizens who took over ’s company were at the time vice presidents of the Evsen Group, a business conglomerate that operates in Eastern Europe, especially in and .  The president of the company is Ali Evsen.

Evsen was arrested in because he wired €17 million to a host of accounts in the Spanish Bankinter.   Evsen said the money was loan repayment, but Spanish authorities considered the transaction suspicious.  At the time, they made no mention of the deal.  Evsen was later released and is awaiting court action against him.

According to the Spanish arrest warrant, Evsen is a shareholder in one of 's flagship companies, Mediterranean Sea Gas Co., which allegedly sold Egyptian gas purchased from the Egyptian government to at below market rates.

Evsen acquired shares in the natural gas business in 2008 in exchange for the proceeds of the sale of land in urban areas in .

Firidun Goyushov, the man who took over directorship from ’s children in the companies is the vice president of the Evsen Group.  According to its web site and company records, he owns a number of companies in , including shares in a large shopping mall and taxi company, once owned by the Evsen Group, with Evsen’s brother in law.