In 2013, Oceanco, one of the top yacht builders in the Netherlands, launched a top-of-the-line creation, an 85.6 meter super-yacht with the designation Y708.

The yacht's lavish interior was designed by the firm of Alberto Pinto and its exterior by Russian designer Igor Lobanov. It boasts every conceivable amenity: Y708 can accommodate up to 14 guests in seven suites, one VIP cabin and three double cabins.

The interior of the yacht is equipped with a gym, spa and elevator. A swimming pool on the aft deck transforms, as needed, into a helicopter pad. The upper deck has a jacuzzi surrounded by plush white sofas where guests can take a relaxing sprawl. After Y708 was delivered to its new owner, whose identity was shrouded in mystery, the boat’s name was changed to St. Princess Olga.

Today, St. Princess Olga ranks 72nd on the list of the world’s largest yachts, according to the Superyachts website.

The owner’s name remained secret for several years. But reporters for Organized Crime and Corruption Reporting Project (OCCRP) and Novaya Gazeta, by tracing the yacht’s travels and matching them to posts on social media sites, believe they have identified a possible owner of the vessel.

Igor Sechin, 55, is considered one of the most powerful men in Russia, after his long-time friend and boss, Russian Federation President Vladimir Putin. Due to his tough character and close ties to secret services , Sechin is sometimes referred to as Darth Vader by Russian and international media.

Sechin has been working with Putin since the early 1990s. When Putin became the head of the Committee for Foreign Affairs in the St. Petersburg Mayor’s Office in 1991, Sechin was appointed his chief of staff. The two became close.

“When I moved to Moscow, [Sechin] asked [me] to take him with me. And I took him,” Putin wrote in his autobiography, “First Person”.

It was the first of a series of coordinated career moves, with Sechin always following his boss. From 2004 till 2008, Sechin worked as deputy chief of Putin’s administration. When Putin headed the government in 2008, Sechin was appointed deputy prime minister.

Since 2012, Sechin has been the chief executive officer of Rosneft, Russia’s state-owned energy giant.

Princess Olga may not be just a random name.

When Sechin divorced his first wife, Marina, the name of his new wife was kept a closely guarded secret. But in June 2016, the Russian news agency life.ru--which is considered to be close to the Kremlin--published a video from a private party held after the St. Petersburg International Economic Forum (SPIEF). At that party, Sechin was accompanied by a young, attractive blonde woman.

By comparing the woman’s face in the video with accounts in social networks, OCCRP found profiles of Olga Rozhkova on Facebook and Instagram. Novaya Gazeta later obtained documents which prove that in 2011, Rozhkova changed her surname to Sechina.

According to the photos from the social networks, Olga Sechina spends most of her time abroad.

Since the beginning of 2016 she has visited the Maldives, Italy, Vietnam, India, Germany and France. But it looks like her favorite countries are Italy and France, especially the luxurious resorts on Sardinia and Corsica.

In many of those photos, Sechina is on a yacht. For example, on Aug. 27, 2014, Sechina published a photo on her Instagram account from a yacht, where she is seen sitting with her friend on plush white sofas near a round jacuzzi.

On July 5, 2015, Sechina published another photo on her Instagram that show her sitting on a deck near a swimming pool.

On Aug. 1, 2015, she published a photo from the same deck near the same swimming pool.

Details seen in all three photos — the deck, the swimming pool, the jacuzzi, sofas and sun loungers — correspond to those seen on the yacht St. Princess Olga. 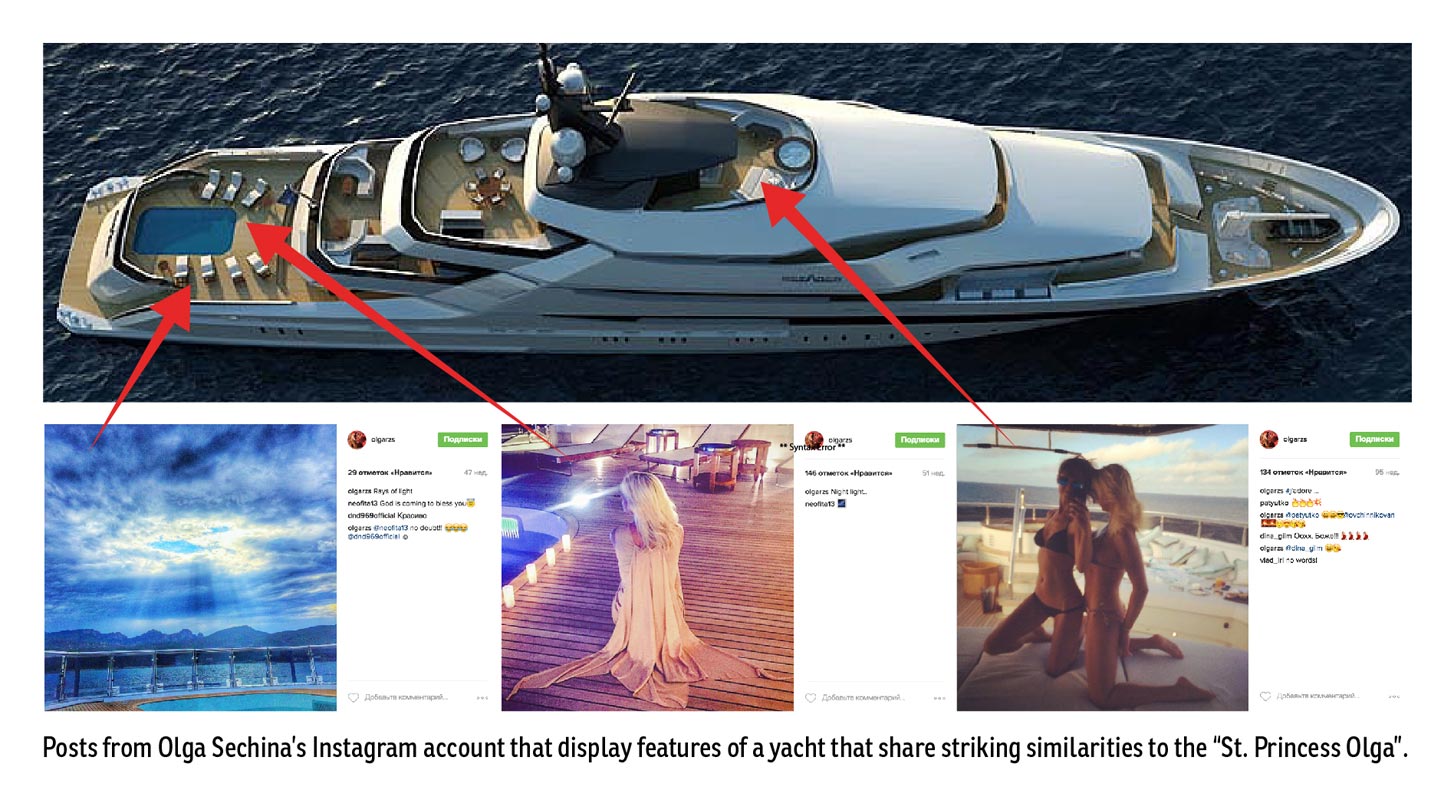 Other photos posted on Sechina’s social networks indicate that the yacht she uses is registered in the Cayman Islands, based on the flag.

Similarity in structural details and fittings are not the only evidence that the St. Princess Olga is used almost exclusively by Sechin’s wife. By matching the routes of the yacht with photos from the accounts of Sechina and other users, OCCRP and Novaya Gazeta found many correlations.

For instance, on July 13, 2016, Sechina published a photo of herself aboard a vessel in Ibiza, Spain. 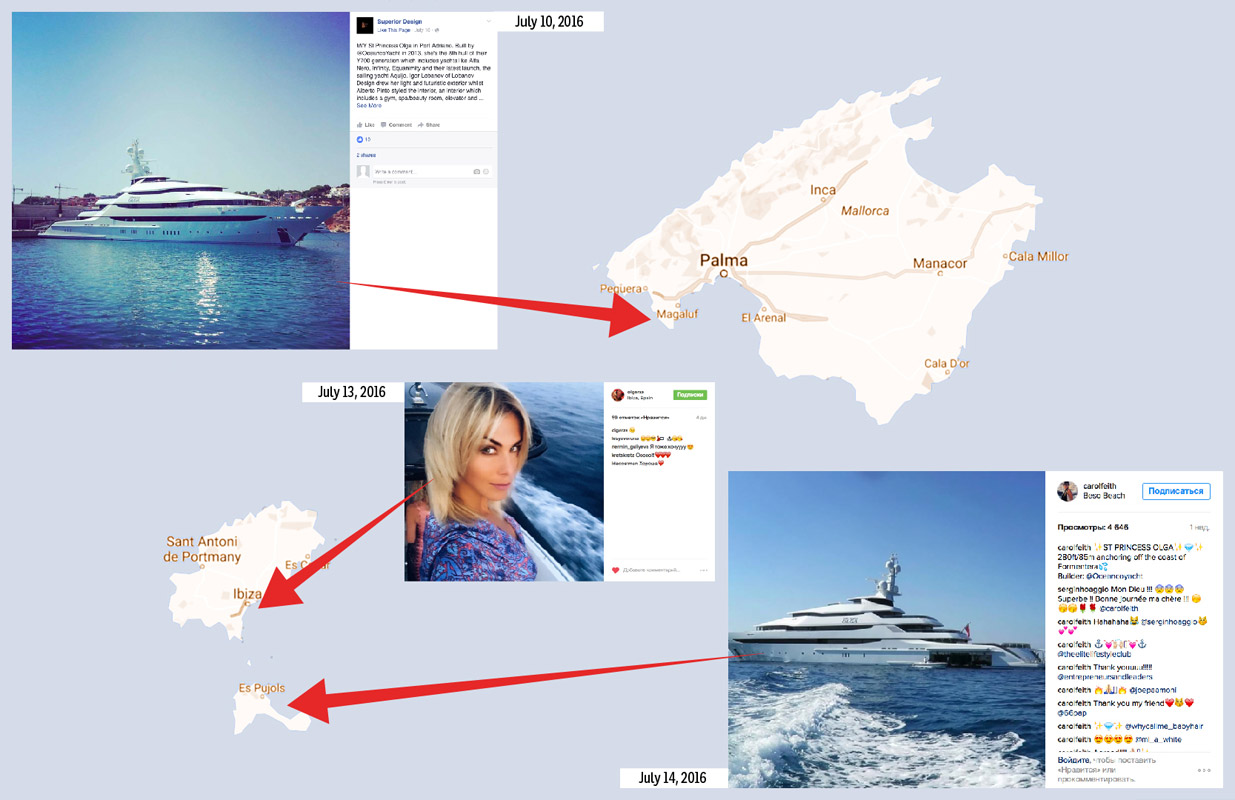 Three days earlier, on July 10, the company Superior Design published on its Facebook page a photo of the St. Princess Olga in Port Adriano, in the Balearic Islands near Ibiza.

On July 14, Instagram user @carolfeith published a video of the same yacht near the Balearic Islands.

Just about a year earlier, on July 19, 2015, Sechina published a photo on her Instagram account from Venice, Italy. The vessel tracking systems show that on the same date, the St. Princess Olga was in Venice.

The examples stretch back several years. On May 4, 2015, Sechina published a photo on her Instagram from Capri, Italy. And once again, the St. Princess Olga was tracked near the island of Capri on that same day. The same was true in Corsica on June 14, 2014.

Reporters for OCCRP and Novaya Gazeta found six  exact matches between 2014 and 2016 when the routes of the yacht corresponded with Sechina’s documented travels. The sheer number of yacht photos visible on Sechina’s social networks during the time period indicates she was using St. Princess Olga constantly.

The exact price of the St. Princess Olga could not be determined. The price of a truly luxurious yacht depends on many things, such as how the vessel’s exterior is crafted, or how its interior is designed and furnished. But vessels of similar length and design are being sold at US$ 190 million.

Operating a superyacht is expensive making it a luxury for only the world’s wealthiest people. According to Towergate Insurance, some of the average costs for a yacht include crew salaries, maintenance, insurance , and dockage fees. Fuel costs run about 500 liters per hour or almost US$ 2000/hr. Towergate’s survey said owners can expect to pay up to 10 percent of the initial cost of the yacht in operational costs for a year. By that estimate, the Princess Olga would cost as much as US$ 19 million per year to operate.

Sechina’s husband Igor is one of the best-paid managers of the state-owned companies in Russia. Last year BBC reported that the board of directors of Rosneft approved a salary for Sechin that could be worth up to US$ 11.8 million (including bonuses). He has not reported his income and his net worth is not known.

It is impossible to fully determine whether Sechin would have the earnings to buy and operate the St. Princess Olga but it would be unlikely based solely on his BBC reported salary.

It’s theoretically possible to regularly rent such a yacht, although rents for similar-sized super-yachts equipped like the St. Princess Olga start at US$ 1 million per week.

In a letter to Novaya Gazeta, a Rosneft representative said the company "doesn’t believe it is possible to answer questions related to the private life and property of its employees".

The representative also warned that those who were involved in the "illegal gathering and usage of unverified information might be held legally responsible."

OCCRP and Novaya Gazeta collected the information from publicly available social media profiles which were deleted after reporters asked about their content.

The representative also said, in their opinion, that Novaya Gazeta and OCCRP were part of a smear campaign against the company but did not elaborate by whom or why.