U.S. Returns $3.8 Million Worth of Looted Artifacts to Cambodia

U.S. authorities repatriated 27 looted antiquities to Cambodia, most of which were confiscated from a Manhattan gallery whose owner was arrested in India. 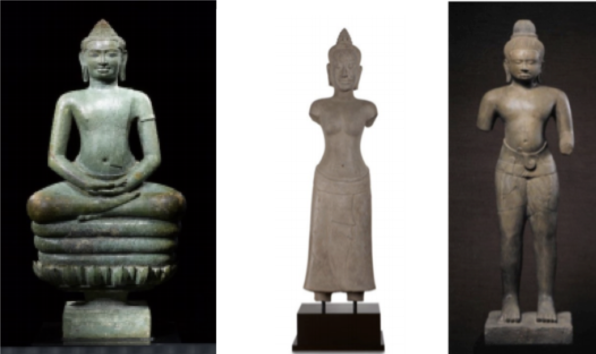 In the past few months, the Manhattan D.A. has repatriated 390 items from Kapoors collection to their countries of origin. (Photo: Manhattan DA)Valued at approximately US$3.8 million, the returned items included several Angkorian Buddhist statues and Hindu statues such as a bronze meditating Buddha on a Naga, a statue of Shiva, and a Buddhist sandstone sculpture of Prajnaparamita.

“The repatriation of these 27 stunning relics to the people of Cambodia restores an important link between the nation’s classical Angkor era and its modern customs and beliefs that, for far too long, was disrupted by the greed of stolen antiquities traffickers,” Vance said.

Of the 27 pieces, 24 came from the collection of notorious New York art dealer, Subhash Kapoor.

For years, the Manhattan D.A.’s Antiquities Trafficking Unit and Homeland Security Investigations (HSI) have been investigating Kapoor and his co-conspirators for the illegal looting, exportation, and sale of ancient art from Sri Lanka, India, Pakistan, Afghanistan, Cambodia, Thailand, Nepal, Indonesia, Myanmar, and other nations, a statement from the attorney’s office said.

The group smuggled the items into the U.S. and sold them in Kapoor’s gallery on Madison Avenue.

In the past few months, the Manhattan D.A. has repatriated 390 items from Kapoors collection to their countries of origin. Earlier last week, the D.A. also returned 12 artifacts to China, and in April, some 33 artifacts to Afghanistan as well.

Kapoor, who has been languishing in prison in Chennai, India, since his arrest in 2012, has been charged with running a massive smuggling ring that specialized in religious artifacts from South and Central Asia.

The illegal antiquities trade is a multi-billion dollar global industry according to a 2018 report by Standard Charter Bank, and it’s beneficiaries are not just high society art aficionados like Kapoor and his Manhattan clients, but often the trade is a major funding source for criminal and militant groups on the supply side.

“You cannot look at it separately from combating trafficking in drugs and weapons. We know that the same groups are engaged, because it generates big money,” said Catherine de Bolle, Executive Director of Europol after a major crackdown on the illegal antiquities trade last May.

The looting of cultural property from active war zones, like Afghanistan and Cambodia in the 1970s is considered a war crime under the 1954 Hague Convention.

“The repatriation provides evidence that even during the difficult circumstances of the COVID-19 pandemic, Cambodia remains committed to finding and bringing back our ancestors’ souls that departed their motherland over a number of years, including during a period of war,” said Dr. Phoeurng Sackona, Minister of Culture and Fine Arts.