Armenia’s President Armen Sarkissian signed on Monday a law that allows state institutions to seize property suspected to have been acquired illegally. 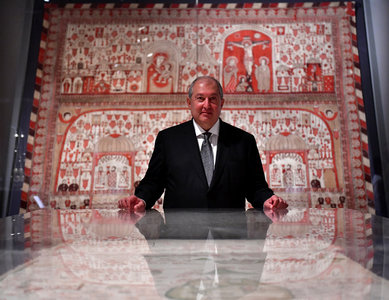 Armenia's President Armen Sarkissian. (Photo: President's Office)The country’s parliament adopted less than a month ago the Property Confiscation Law that enables confiscation of illegally acquired property worth more than US$100,000.

“The Law is expected to be applied… as an exceptional way of fighting crimes,” the President’s Office said in a statement. It added that the law should be carefully applied, as any “unfair application of the law can undermine trust in the state and jeopardize its effectiveness.”

President Sarkissian also stressed that the law deals with a wide scope of basic human rights and that its application “must ensure balanced legal guarantees,” such as the right of individuals to privacy and family life and protection of personal data.

To be sure that the law will not cause misuse of available information, the president said that the rights of individuals should not be violated, information on possible criminal activities should not be collected in an illegal way, used unduly, obstructed by economic entities and “should not lead to unequal competition for investors and businessmen.”

The introduction of this legislation and the careful warnings against its misuse reflect Armenia’s new image of a developing democracy.

In its latest report, Freedom House, a US nonprofit organization that conducts research on democracy, political freedom, and human rights, said that Armenia had the largest two-year increase in democratic rating in the nearly 30 years that the watchdog has been monitoring the region.