Portrait of a troll

Internet trolls normally operate in the shadows, posting inflammatory and often false material behind the mask of anonymity or fake identities.

Reporters from OCCRP were able to track down and interview one troll active in the vote for Scottish independence and its highly charged aftermath.

Along the convoluted trail, they uncovered a number of bogus claims and outright lies.

One video, viewed on Youtube 450,000 times, shows a woman apparently guarding a ballot box as another woman stuffs wads of ballots into it. It was captioned “British managers stuffing box” and was uploaded by a Youtube user called “hahaicamefirsthar.”

But OCCRP found that the video did not show British managers – in fact, it depicted scenes from vote counting in St. Petersburg in the Russian presidential election of 2012.

OCCRP was able to track down “hahaicamefirsthar” by cross-referencing his other videos with his account on the gaming website Steam, where he uses the handle “President Dr Bashar Al Assad.”

“Dr Assad” told OCCRP via a chat on Steam that he had grabbed the video from a post by Youtube user Marcus Zimmerman, who’d uploaded the same clip earlier that month with the title “Election Fraud in Russia.”

Eventually “Dr Assad” allowed an OCCRP reporter to friend him on Facebook, where he is known as Kyle Conklin – a 20-something American with a sizeable beard. In his “about” section, Conklin describes himself as a “propaganda minister” at “the Ministry of Truth.” 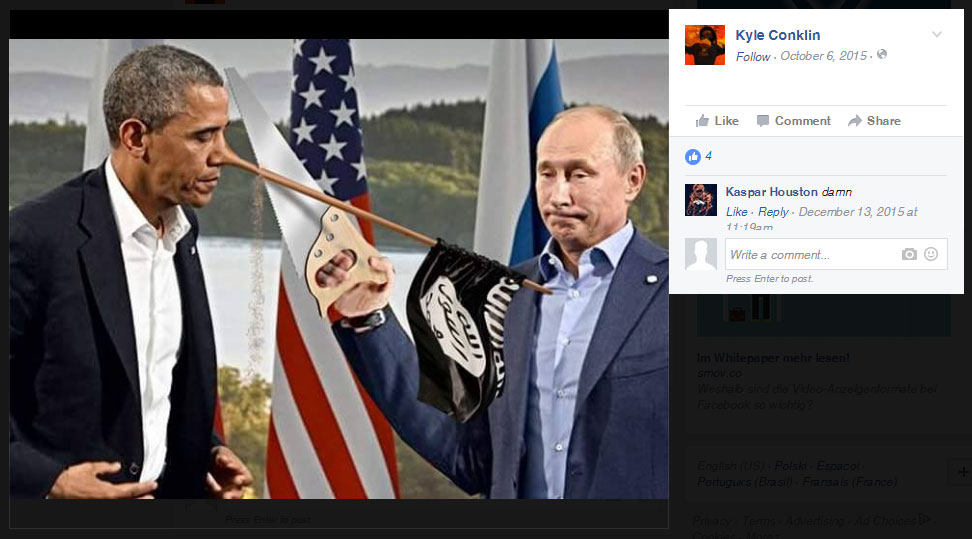 One of the images uploaded to his account shows Obama on the left, with a Pinocchio nose extending across the frame, with an ISIS flag on the end of it; and Putin on the right with a wood saw, about to chop off the nose.

Admitting that he’d worked in the past to help anti-Western propaganda channels under the name of StormCloudsGathering (with a Facebook following of more than 300,000), he said he wanted his own video to go viral.

He spread the vote fraud video by uploading it repeatedly to websites 4chan, Reddit and Facebook. It was reposted widely by accounts logged under Russian names, including via a Facebook page called NovoRossiya (a reference to breakaway regions of East Ukraine) and several others where dozens of comments can be found in the Russian language.

He sympathizes with Russian foreign policy, which fits into his broadly anti-Western viewpoint. He has educated himself in Russian language and media, and “gone well out of [his] way” to speak to paid Russian trolls. In fact, he said, he had sent videos to them in the past to share.

Asked if he was himself a troll, Conklin told OCCRP that although he was a good candidate and would “gladly take that title,” he was not paid for his activity. He was motivated instead by a wish to “open people’s minds” to his view of reality: “War is hell and the West is creating it.”

Although Conklin may be what BBC journalist and troll expert Andrey Soshnikov calls “an enthusiast” rather than a paid shill, this particular video was widely shared by a Russian troll network with which he is close.

Soshnikov told OCCRP that the fact Conklin left up the video up on Youtube without admitting the prank suggests it is intended as a contribution to the propaganda “noise” that blurs public perceptions facts and fiction.

“We receive a lot of information nowadays and it’s hard to analyze it sometimes,” he said. “How propaganda works is, it creates a noise that is very small, but to which your brain is very sensitive, that is always with you.”