The son of Lebanon’s central bank governor was able to transfer over $6.5 million out of the country while banking restrictions blocked ordinary citizens from accessing their savings and a financial crisis shredded the value of their deposits, leaked documents show.

Most bank customers in Lebanon were prevented from withdrawing or transferring their money in U.S. dollars in late 2019, when a foreign currency shortage caused the financial system to unravel. Many watched their savings evaporate as the Lebanese pound — pegged to the dollar for over two decades — shed more than 80 percent of its street value within months.

But the restrictions were never made official, meaning that a well-connected few could still access and move their deposits.

OCCRP previously discovered almost $29 million in London property deals which Nady Salame’s company carried out in 2020, during the height of Lebanon’s economic crisis.

The assets were ultimately owned by his father Riad, the central bank chief, who has been investigated in at least five countries since the crisis began for embezzlement, illicit enrichment, and money laundering.

In March, EU authorities froze assets worth 120 million euros ($130 million) in relation to the ongoing investigations, including property investments first uncovered by OCCRP.

Four transfers, worth between $1 million and $2 million each, left Nady Salame’s accounts at Lebanon’s AM Bank between October 1 and December 2, 2019, the documents show. Two Lebanese bankers with knowledge of AM Bank’s invoicing system confirmed the authenticity of the documents.

Salame was also able to convert billions of Lebanese pounds at the official exchange rate even as the street value of the currency collapsed, saving him hundreds of thousands of dollars.

At that time, most Lebanese were forced to queue for hours just to withdraw a few hundred dollars from their accounts, or buy U.S. dollars on the black market at skyrocketing rates. Some depositors reported that their banks had not allowed them to exchange pounds to dollars unless they agreed to freeze their funds for two years.

Reports of the country’s political and financial elites evading such restrictions have been widespread. In July 2020, Alain Bifani, a former director general of Lebanon’s Ministry of Finance, told the Financial Times that up to $6 billion had been “smuggled outside the country” while a “dirty money elite” shifted the burden of the crisis onto ordinary Lebanese.

In a 2020 study of the collapse, U.S. economist James Rickards wrote that “elites were forewarned and transferred large dollar deposits out of Lebanon” while the savings of ordinary businesses and retail depositors became “frozen and effectively worthless.”

Yet specific cases have been extremely difficult to document, partly due to banking secrecy laws that had helped earn Lebanon a reputation as the “Switzerland of the Middle East” before the collapse.

The crisis has inflicted some $70 billion in damage to Lebanon’s economy, according to a government estimate from September. Half of the country’s roughly seven million people have been pushed into poverty, while services such as electricity provision — already suffering from regular shortages — have collapsed.

Sabine Kik, a professor of law at the Lebanese University, said “innocent people” had been locked out of a banking system dominated “by a criminal” mob.

Political and banking elites had “moved their bonanza profits to offshore accounts under capital control, imposed and managed by the criminals themselves,” said Kik.

Nady Salame did not respond to questions about the bank transfers.

Since 1997, Lebanon had maintained a peg of about 1,500 Lebanese pounds per U.S. dollar, allowing the two currencies to be used interchangeably in the local economy.

But sustaining the fixed rate required a constant influx of dollars, which were attracted into the banking system through unsustainably high interest rates. The system came unglued in late 2019, and as dollars started to dry up, the black market and official exchange rates diverged.

The economic turbulence, combined with anger over proposed taxes on fuel and messaging apps like WhatsApp, sparked nationwide protests in October 2019. Banks closed for two weeks starting on October 17, then implemented a series of measures that amounted to informal capital controls. Banks blocked ordinary depositors from accessing dollar-denominated savings or moving money out of the country. 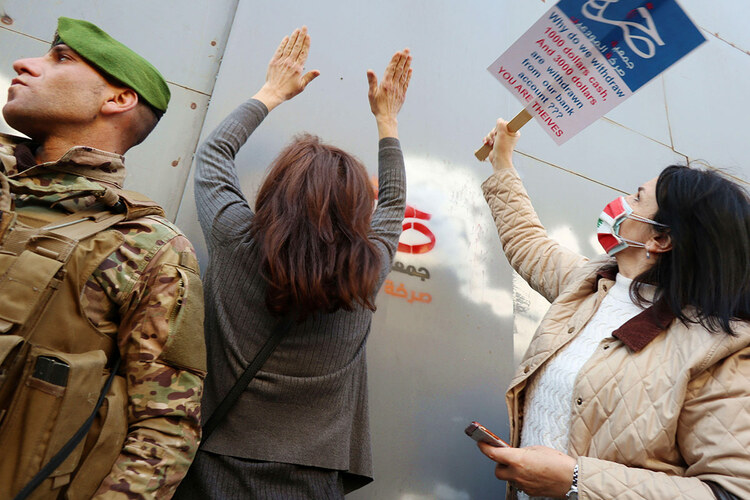 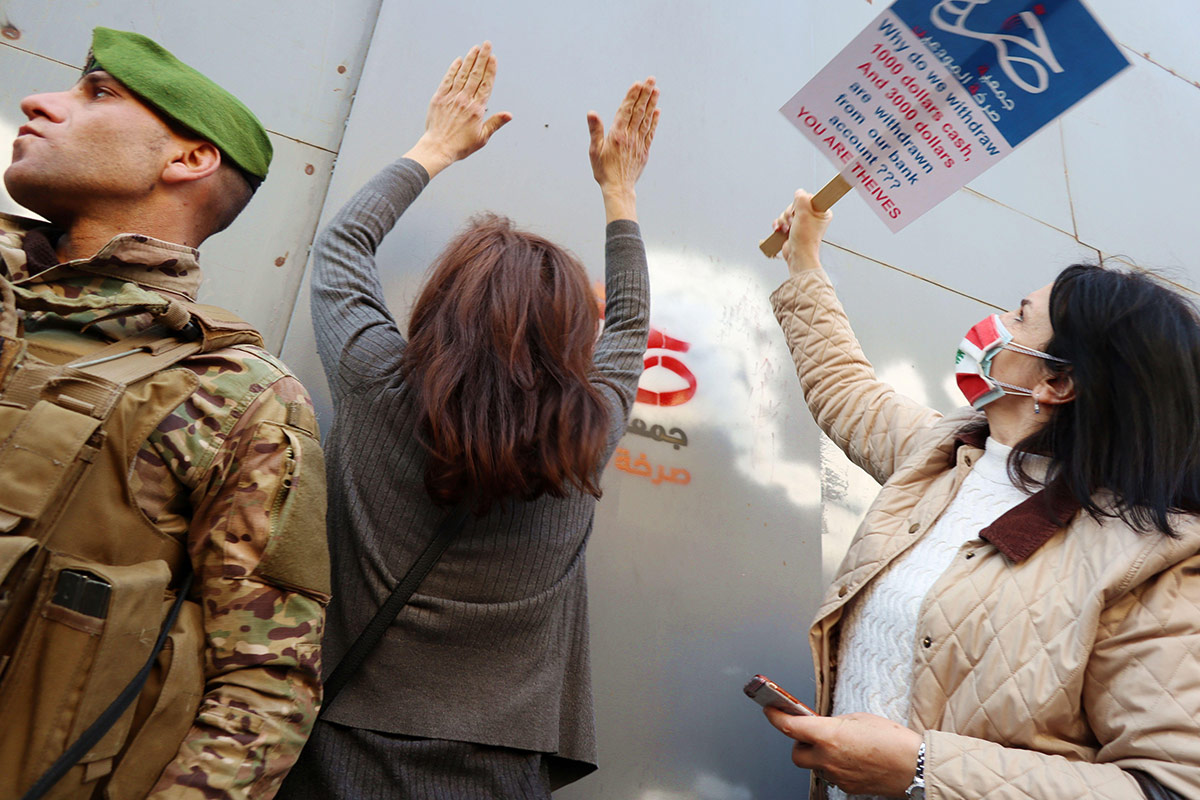 But as increasingly desperate depositors watched the value of their savings plummet, Nady Salame was able to move millions of dollars abroad and continue to use the official exchange rate to convert large amounts of Lebanese pounds, the leaked bank statements show.

The first transfer of $1 million left his account on October 1, a little over two weeks before the banking shutdown. Three more transfers worth a total of $5.5 million followed after banks reopened on November 1.

That same day, Salame was also able to transfer money from an account denominated in Lebanese pounds into a separate dollar account at the official rate, totaling over $2.6 million — another operation which by then would have been impossible for most Lebanese. He then sent $2 million of that abroad, the documents show.

At the time, the black market rate was about 1,750 pounds to the dollar while the official rate was still 1,500, meaning the exchange saved Salame over $300,000 compared with what ordinary customers buying dollars on the street would have had to pay. 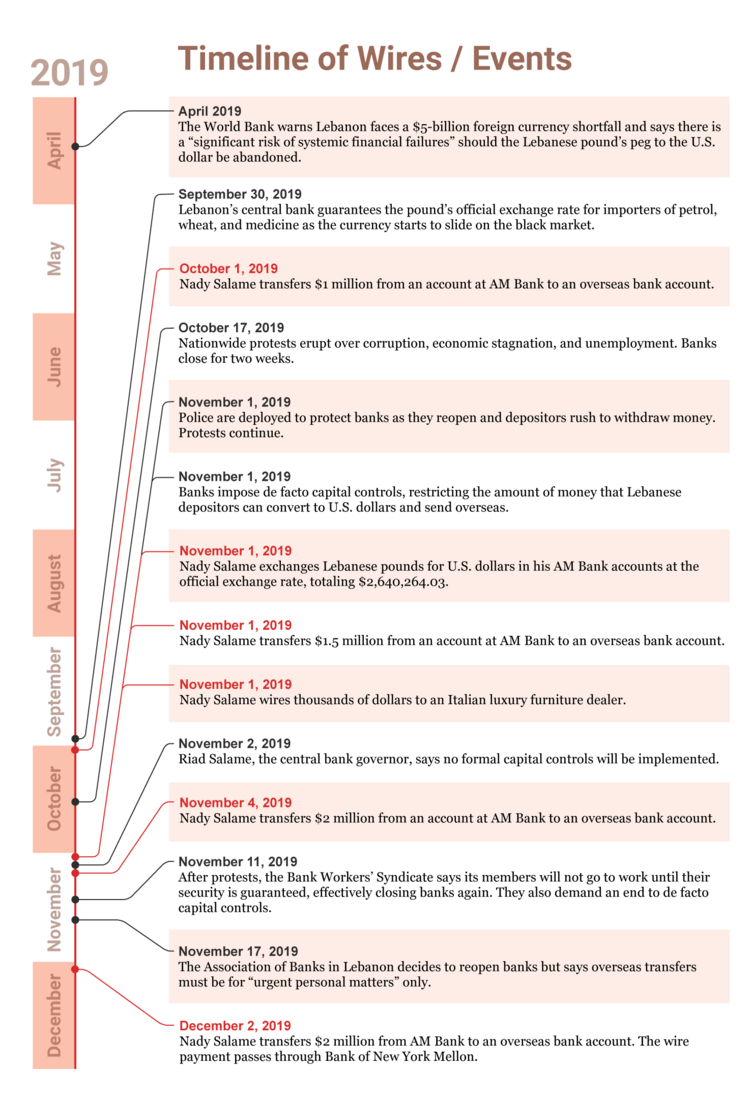 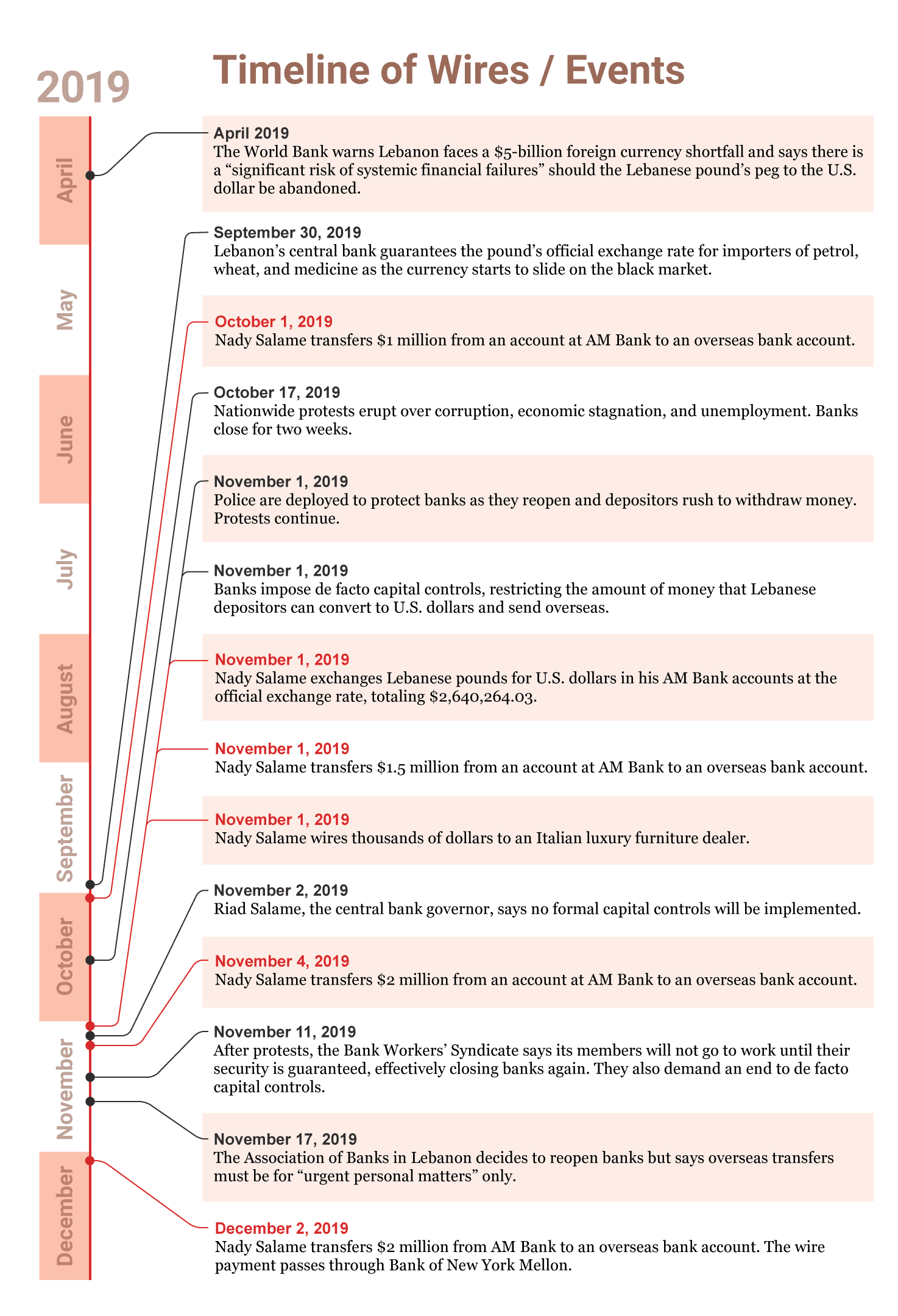 Credit: Edin Pašović/OCCRP A timeline of events showing the context against which Nady Salame transferred millions out of Lebanon.

Salame’s bank statements show that he also sent thousands of dollars to an Italian luxury furniture supplier on November 1.

The transactions were carried out at AM Bank, chaired and part-owned by Marwan Kheireddine, a former minister of state. Kheireddine, who is running in parliamentary elections scheduled for May 15, made headlines by buying a $10-million New York penthouse from American actress Jennifer Lawrence during the height of Lebanon’s crisis in 2020.

Kheireddine previously denied buying the apartment for himself, claiming he was just a manager in the company that made the purchase. Property records show Kheireddine’s name on purchase papers on behalf of the company.

A representative of AM Bank said it was in full compliance with Lebanese laws on banking, as well as international best practices. It declined to comment on the specifics of the Salame case.

The financial crisis has inflicted enormous hardship on ordinary Lebanese.

In early 2020, Hassan Mughniyeh, a restaurant owner and father of two, scrambled to withdraw $15,000 from his Lebanese bank account to cover his mother’s treatment after she was diagnosed with cancer. Blocked from accessing his funds, Mughniyeh sued his bank. But by the time he managed to get the money, his mother’s disease had progressed. She died shortly after being admitted to the hospital.

“I still feel the need to avenge her death, but I do not want to resort to violence,” Mughniyeh told OCCRP.

Since then, Mughniyeh has helped establish a group that campaigns for people’s right to access their savings.

A similar group, called the Lebanese Depositors’ Union, has filed around 300 lawsuits since 2019 in Lebanon and abroad seeking transfers of funds abroad and the reopening of closed accounts.

Nizar Ghanem, a co-founder of the Depositors’ Union, said the government’s failure to introduce clear capital controls applicable to everyone had allowed Lebanon’s most powerful people to save themselves while citizens bore the brunt of the currency collapse.

“They should have legislated a capital control law from the first minute,” he said. “They did not do so to keep the door wide open for exceptions that allowed the lucky ones to smuggle their money out.”