Birgitte Bonnesen was relieved of her duties as the CEO and president of Swedbank on Thursday amidst a money laundering scandal primarily related to the bank’s branches in the Baltic states. 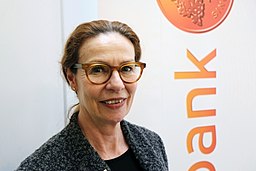 ”The developments during the past days have created an enormous pressure for the bank,”  Lars Idermark, chairman of Swedbank’s board, said in an official statement.

“Therefore, the Board has decided to dismiss Birgitte Bonnesen from her position. With that said, Birgitte Bonnesen has during her three years as CEO made an important contribution by creating a leading digital bank with physical presence,” he added.

The board decided that Swedbank’s current Chief Financial Officer Anders Karlsson will be the acting president and CEO of Swedbank until a permanent replacement for Bonnesen is found.

SVT and its partners in the Baltic states ran a story about a company that used a Swedbank account to allegedly conceal bribes to former Ukraine president Viktor Yanukovych.

Days later the broadcaster revealed that the company, Vega Holding, also made payments to Inlord Sales LLP, a UK-based company which was mentioned in the Paul Manafort affair.

Although it may not be from the sum received from Vega, Inlordlater paid nearly a million dollars to Manafort, Donald Trump’s former campaign manager who last year landed in an US prison for concealing income and tax avoidance.

SVT also found that Vega donated $100,000 to Project on Transitional Democracies, a California-based organization dedicated to “accelerating democratic reform” in the post-Soviet states. The NGO is run by Bruce P. Jackson who, according to Vice News, worked with Manafort on facilitating meetings between Yanukovych and top US officials.

Moreover, authorities raided on Wednesday Swedbank’s central office in Stockholm as part of an investigation into the banks operations. It is suspected that some of the bank’s shareholders might have had prior knowledge of an upcoming report by SVT which may have granted them advantage in preparation for the stock market’s reaction.

According to Bloomberg, shares in the bank have plunged about 30 percent since the scandal broke last month. Swedbank’s stock market decline is equivalent to more than $7.5 billion in lost market value, the outlet said.

The money laundering allegations tie Swedbank to Danske Bank which hit headlines after journalists revealed the role Danske’s Estonian branch played in allowing billions of dollars to be laundered over the past decade.