The former driver of a local government official who is suspected of corruption died while being interrogated by the Chinese anti-graft agency, the South China Morning Post reported on Thursday. 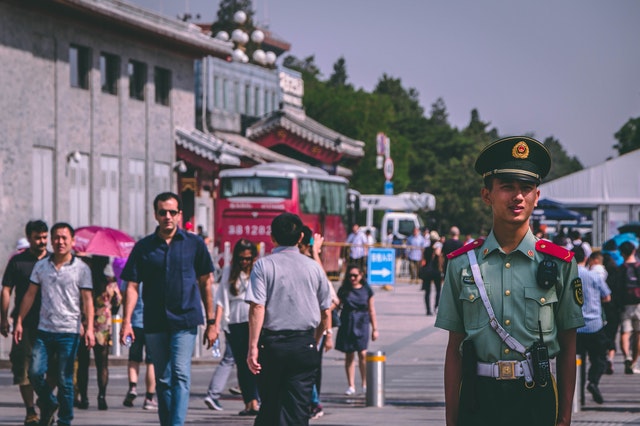 Officer outside of China's Forbidden City (Photo Credit: Pexels)It’s the first death stemming from the National Supervisory Commission (NSC), that was established in March to investigate party members and public officials suspected of corruption.

Chen Yong, 45, worked for the district government of Jianyang in the Fujian province from 2006 until 2016. Authorities detained him last month to question him about his former boss, Lin Qiang, a vice director of the district, according to Caixin.

Chen’s sister told Chinese media that when she went to visit him, she was taken to the morgue to collect his body. She said he died on Saturday and his face was “disfigured” and that he had bruises on his cheek and waist.

Authorities told the family that he collapsed during the interrogation and that he was rushed to the hospital only to die several hours later.

Drivers and secretaries have frequently been targeted by authorities during investigations into higher ranking officials, according to the South China Morning Post.

The outlet notes that when the NSC was created, officials said that those detained under its investigations would be barred from accessing a lawyer until they were officially arrested and handed over to the prosecution.

The NSC also said that there would be protections in place to secure the safety of those detained.

The agency was given more power to address corruption than the Supreme Court has, according to the BBC. Besides interrogation, the NSC also oversees punishment in its cases.

“We haven’t heard any explanation yet, but they will set up an investigation team to look into the case,” Lin, Chen’s wife, said, according to the South China Morning Post.

Requests from the family for the video of the interrogation were denied.

Human rights groups have noted their concern over the vast power of the NSC. The agency expands state surveillance of Chinese citizens, critics and legal scholars allege.