A Lebanese judge charged in absentia Central Bank governor Riad Salame with illicit enrichment and money laundering only days after ordering the arrest of his brother on similar charges. 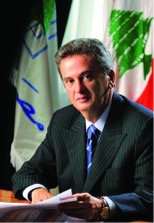 A Lebanese judge charged in absentia Central Bank governor Riad Salame with illicit enrichment and money laundering only days after ordering the arrest of his brother on similar charges. (Photo: Tachfine Oumlil, Wikimedia, License)The case reportedly relates to the purchase of Paris apartments that were sometimes rented out to the Central Bank, Judge Ghada Aoun told Reuters on Monday.

With his wealth under scrutiny in a number of European countries, Salame has consistently denied any wrongdoing, and has attributed his wealth to family inheritances and his commercial banking career before joining the Central Bank.

Rumors of the governor’s offshore wealth have swirled around Lebanon for years, but allegations of money laundering and embezzlement against governor Salame have gained momentum since 2020 when OCCRP and its Lebanese media partner Daraj published two investigations uncovering the extent of his offshore investments.

The first revealed that offshore companies owned by Riad Salame have quietly invested nearly US$100 million in overseas assets, focusing on real estate in the U.K., Belgium and Germany, even as Salame encouraged others to keep their money in his economically devastated country.

The second uncovered how a company tied to Salame bought a stake in his son’s London-based financial management company, then sold it to a major Lebanese bank that he regulates.

Since then, authorities in France, Switzerland, Lichtenstein and Luxembourg have launched probes into Salame’s personal wealth, and possible embezzlement to the detriment of the Lebanese Central Bank.

Lebanon is in the midst of a financial crisis that has plummeted its currency and worsened poverty and unemployment, prompting widespread unrest.

Salame has sat at the head of the Central Bank for almost three decades.