Portuguese and Spanish police intercepted on Saturday a sailboat off the coast of Portugal, seized 5.2 tonnes of cocaine and arrested the three-member crew, in what police are calling the largest drug bust in Europe in several years. 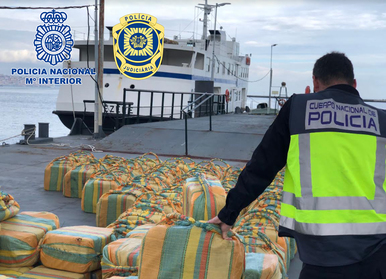 Spanish police said that the ‘G Siro’ was a false name and the vessel was not actually registered in Spain, but the traffickers camouflaged it as such in order to hide their criminal actions.

Police have been investigating for several months the activities of transnational crime groups who are trafficking large quantities of cocaine from Colombia and Venezuela to Europe by sea. They predominantly utilize pleasure crafts and yachts for transport across the Atlantic, given the large quantities of drugs the vessels can hold as cargo.

Police claim this modus operandi aided them in identifying the G Siro as being involved in criminal activity.

Had the vessel slipped through undetected, police presume it would’ve rendezvoused with “go-fast” speed boats at predetermined coordinates south of the Iberian Peninsula; the speedboats would’ve then transported the drugs the rest of the way into Europe.

Portugal’s Judicial Police has called it their largest cocaine seizure in 15 years.

Officers also arrested three suspects who were on board. One of them was already a well known drug trafficker and the other two, despite having no prior convictions, have been under investigation for their suspected relationships with other transnational drug trafficking figures.

In September, Spanish authorities seized more than 1,200 kilograms of cocaine from a sailboat off the coast of the Canary Islands, an archipelago frequently utilized by Latin American crime groups as a launch point for their European-bound cocaine shipments due to its geographical position.

Also last month, Spanish police made another seizure of nearly a tonne of high-quality cocaine from a sailboat detained near La Palma. The shipment was estimated to be worth almost $50 million.