Spanish authorities seized more than 1,200 kilograms of cocaine off the coast of the Canary Islands, an archipelago frequently targeted by transnational crime groups as a launch point for European-bound cocaine shipments because of its geographical position. 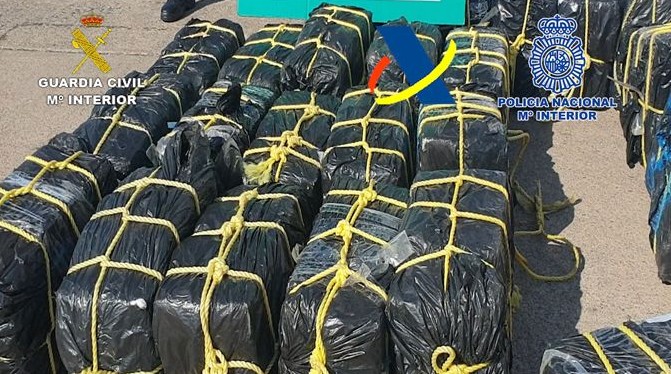 Spanish authorities seized more than 1,200 kilograms of cocaine off the coast of the Canary Islands. (Photo: Policia Nacional)Spain’s National Police, in a joint operation with the country’s Civil Guard and Tax Agency, reported on Sunday that they intercepted a vessel on the morning of September 20th, while it was still some 600 miles west of the islands, in international waters.

Upon investigating the ship’s interior, police uncovered the drugs, which originated from South America. It is presumed that the cargo’s destination was the Iberian Peninsula.

The sailboat, named ‘Memo’, was not flying the colors of any known state; authorities are still unable to determine its nationality.

Police detained the ship’s two crew members who are of Spanish and Italian nationality. The suspects, as well as the vessel and its illicit contents, were transferred to the Port of Las Palmas, a resupply station for ships sailing across the Atlantic.

Investigators are still trying to determine the identity of the transnational organized crime group responsible for trafficking the 1,200 kilos of cocaine.

Spanish authorities were aided by their international partners in locating the vessel.

They include Britain’s National Crime Agency (NCA) and French customs; as well as the Maritime Analysis and Operations Centre, an international agency comprised of six EU member states who coordinate intelligence for the purposes of combating the illicit drug trade by sea and by air.

The Canary Islands are well-placed as a go-between for shipments destined for Europe either from South America or South Africa. The drugs are often brought in by large cargo ships and then transferred to small fishing boats, dinghies, speedboats or sailboats.

Being a major tourist destination, the archipelago is well-connected by air routes to Europe.

Last month, Spanish police raided a residence on the islands linked to Montenegro’s notorious Škaljari clan. Inside, they discovered 408 kilos of cocaine and nearly 500,000 euro (US$586,000) in cash, amongst other luxury items and tools linked to criminal operations.

The drugs were determined to have been grown and processed in Latin America.

Meanwhile, in September 2020, Spanish police intercepted a separate cartel sailboat near La Palma and seized nearly a tonne of high-quality cocaine, estimated to be worth $47.5 million.

In all cases, Spanish police operations were aided by other federal police forces as well as international police bodies.