During a state visit to Israel in December, Slovenian Prime Minister Janez Jan┼Īa met for several hours with representatives of five Israeli companies, including a controversial spyware firm with a history of hacking phones of human rights activists and journalists, Slovenian investigative outlet O┼Ītro revealed. 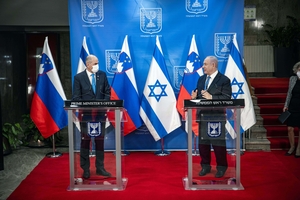 an official from the Slovenian Ministry of Economy signed a joint declaration of innovation with Israeli leaders as a result of his meeting with the five companies. (Photo: Government of Slovenia)Among those Jan┼Īa spoke to a day before he met with his counterpart Benjamin Netanyahu were representatives of the NSO Group - a firm specialized in surveillance software and founded by graduates of the Israeli armyŌĆÖs elite cyber intelligence squad known as Unit 8200 (also known in Hebrew as Shmona-Matayim).

NSO GroupŌĆÖs technology has also been used in the capture of notorious drug kingpin Joaquin ŌĆ£El ChapoŌĆØ Guzman and the halting of terrorist attacks across Israel and Europe.

However, the same technology is believed to have been used to monitor associates of Jamal Kashoggi, the journalist who was murdered in the consulate of Saudi Arabia in Istanbul.

Mexico, Cyprus, Morocco and other governments allegedly used it to target journalists and activists and cyber-security researchers said in December that the spyware was found in the phones of 36 employees of Al Jazeera.

A Slovenian government statement issued during the Israel visit said that Jan┼Īa met with ŌĆ£representatives of leading companies in the field of artificial intelligence and cyber security,ŌĆØ but did not mention NSO by name and when O┼Ītro asked the head of the Israeli-Slovenian Chamber of Commerce about the meeting, he left NSO out when he listed companies Jan┼Īa met with.

However, the Slovenian Ministry of Economy confirmed to O┼Ītro later that an NSO Group representative was at the meeting but that no deal was made or envisaged regarding any cooperation. The Prime MinisterŌĆÖs cabinet also confirmed the meeting but refused to reveal any details.

Still, an official from the Ministry of Economy signed a joint declaration of innovation with Israeli leaders as a result of his meeting with the five companies, pledging to promote cooperation between entrepreneurs of the two countries.

ŌĆśAstronomical MoneyŌĆÖ: How Smugglers Made Tens of Millions Moving Rare Birds Around the World

PakistanŌĆÖs New Ambassador to US accused of Embezzlement