Authorities in Russia will detain top Kremlin critic Alexei Navalny for 30 days after arresting him on Sunday at an airport in Moscow upon his return from Germany, where he was recovering from a poisoning attack allegedly conducted by Russian intelligence back in August. 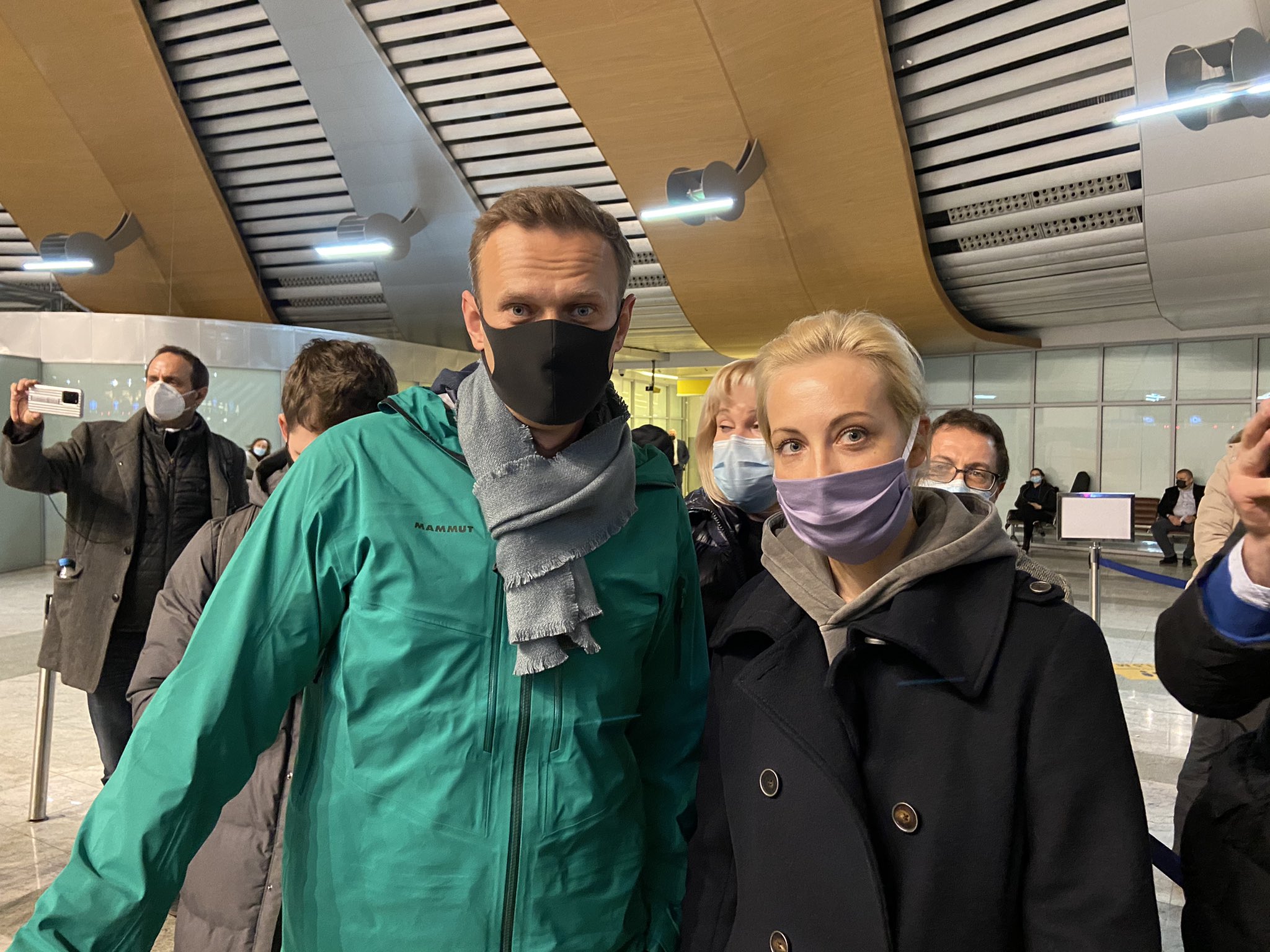 Alexei Navalny with his wife Yulia, minutes before Russian police arrested him at the passport control within the Moscow airport Sheremetyevo. (Photo: Kira Yarmysh, Twitter)The Russian Penitentiary Service (FSIN) said in a statement that Navalny’s arrest follows after he was “sentenced to conditional punishment last year.” He has reportedly been “on the wanted list since December 29, for multiple violations of the probation period.”

Police also detained dozens of Navalny’s supporters, who had gathered at Moscow's airport to greet him.

Navalny’s spokeswoman Kira Yarmysh posted a video from Navalny’s hearing, conducted at a Moscow police station rather than an official court, shortly after his arrest on Sunday.

Yarmysh noted that police troops had been mobilised to surround the building, and that only a handful of pro-government news outlets had been permitted to attend the hearing.

“It’s outrageous what they are doing. This is the highest degree of lawlessness,” Navalny, who was allegedly unable to contact his lawyer for more than 15 hours, said.

In August 2020, Navalny fell sick while on a flight from Siberian Tomsk to Moscow and subsequently slipped into a coma. Russian authorities at first turned down offers from the German government to transport the Kremlin critic to a hospital in Berlin, but eventually capitulated and permitted him to be transferred in a specialised plane to a German intensive care unit.

Doctors at Berlin’s Charite hospital confirmed Navalny had been poisoned with a life-threatening nerve agent called Novichok, a substance developed by the Russian state.

Russian authorities have strongly denied any connection with the attack. 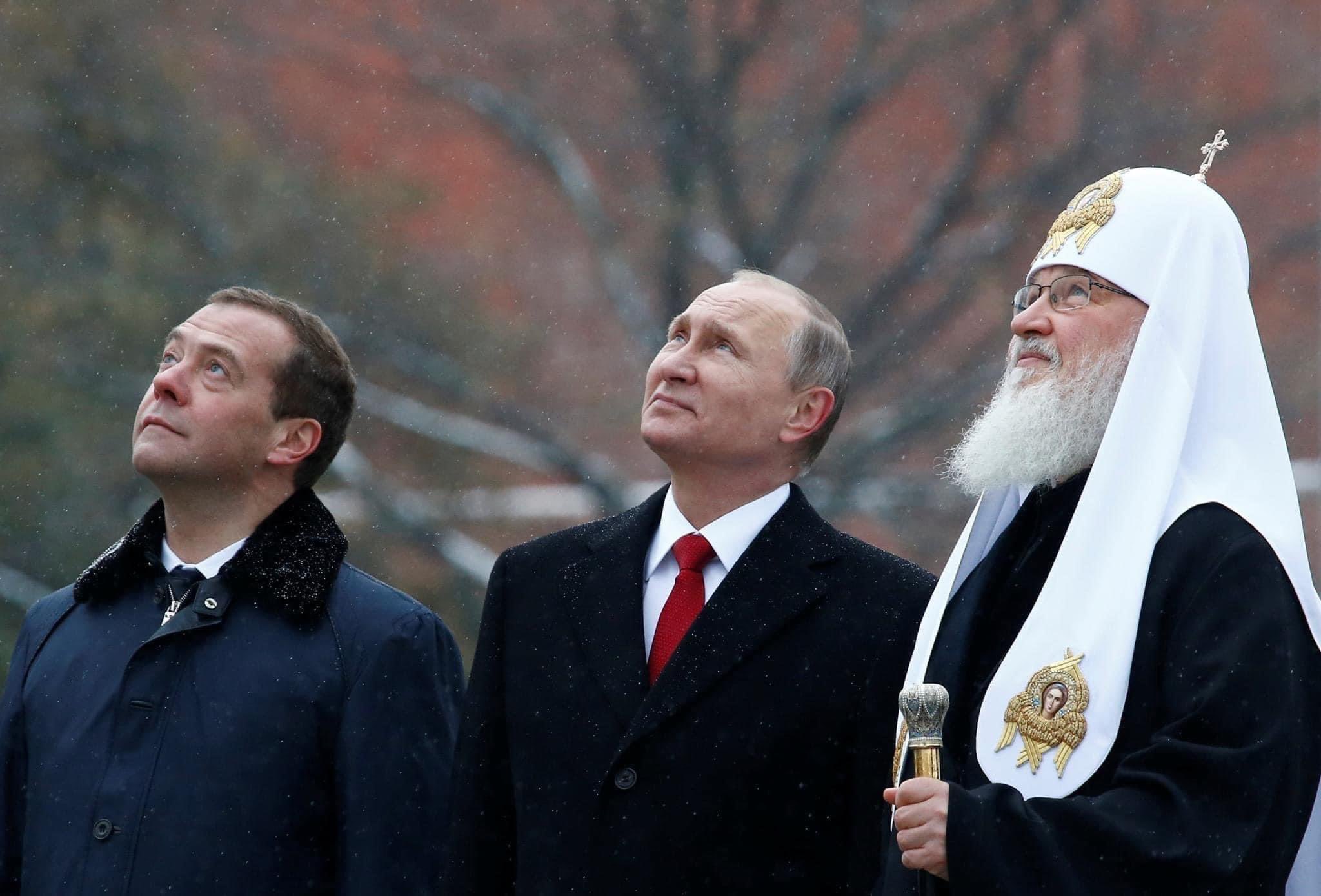 Russia's former Prime Minister, Dmitry Medvedev, President Vladimir Putin and Patriarch Kirill of Moscow. Alexei Navalny published their photo on his twitter, saying: "When you and your friends are waiting for the plane to arrive," alluding for those waiting to arrest him. (Photo: Alexei Navalny, Twitter)

Despite knowing full well of plans to arrest him upon his arrival, Navalny last week announced his steadfast commitment to return to his home country at the weekend.

His arrest has met with heavy criticism in the West, with many leaders calling for Navalny’s immediate release.

“The United States strongly condemns Russia’s decision to arrest Aleksey Navalny,” the U.S. Secretary General, Mike Pompeo, said in a statement. The move was “the latest in a series of attempts to silence Navalny and other opposition figures and independent voices who are critical of Russian authorities,” he said.

The President of the European Commission Ursula von der Leyen called on Moscow to “immediately release him and ensure his safety,” while Amnesty International stated that Navalny was “a prisoner of conscience.”

Condemnation of the decision by Russian authorities and demands that Navalny be released were similarly voiced by the President of the Council of Europe, Charles Michel; EU foreign policy chief, Josep Borrell; German Foreign Minister, Heiko Mass; the U.K. Foreign Secretary, Dominic Raab; the French Foreign Ministry; and the Foreign Ministers of Estonia, Latvia and Lithuania.

The storm of international criticism prompted a response from Russia’s Foreign Minister, Sergey Lavrov, who said Navalny was arrested in accordance with the law and blamed Western nations of exaggerating their reaction to the case in order to distract from perceived problems at home.

“We saw how yesterday’s news about Navalny’s return to Russia was seized upon,” Lavrov said during an online press conference on Monday that ran on for more than two hours.

“One can clearly feel the joy with which carbon-copy comments are coming” from Western politicians looking to divert attention from the “crisis” facing liberal democracy.

Prior to Navalny’s poisoning, Russian authorities had mounted a number of legal challenges in response to the critic’s reports and journalistic investigations into corruption among the country’s top officials.