The U.S. Department of Justice is seeking the forfeiture of a Maryland property belonging to former Gambian president Yahya Jammeh worth some US$3.5 million, which he is believed to have acquired through illegal activities during his two decades at the helm of the West African nation. 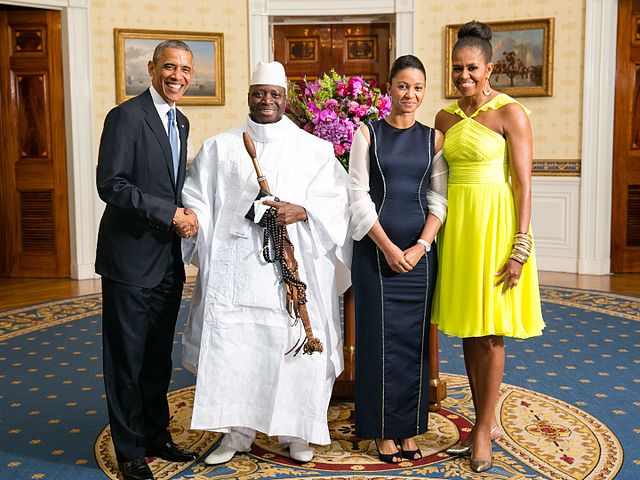 Jammeh and his wife Zineb met with the Obamas at the white house in 2014, only a few miles from their Maryland property. (source:Department of Justice)“Yahya Jammeh conspired with his family members and close associates to utilize a host of shell companies and overseas trusts to launder his corrupt proceeds throughout the world, including through the purchase of a multimillion-dollar mansion in Potomac, Maryland,” said a DOJ statement.

In a series of stories called The Great Gambia Heist, published last year, OCCRP tracked Jammeh’s many corrupt enterprises over the course of his reign from 1994 until his ouster in 2017.

It is estimated that he stole nearly a billion dollars over that period. As president, along with an inner circle of advisors he looted state industries including everything from telecommunications to oil and gas reserves and allowed his country to be a laundromat for money from unsavory actors such as Hezbollah.

According to the DOJ, the Maryland property was officially purchased through a trust set up by Jammeh’s wife.

“The seizure of this property is just another example of our continued efforts to protect the US financial infrastructure by denying a safe haven for foreign kleptocrats,” said Acting Executive Associate Director Alysa Erichs of U.S. Immigration and Customs Enforcement’s Homeland Security Investigations (HSI).

“HSI will not tolerate our country being used by foreign officials to hide their corrupt activities and launder their illicit proceeds,” she added.