One of Yahya Jammeh’s first diplomatic acts after seizing power in Gambia was to establish diplomatic ties with Taiwan.

The move was a clear-cut case of checkbook diplomacy, common in West Africa at the time, but it still rocked the boat in 1995. Gambia had violated Beijing’s golden rule of foreign policy – that all countries must see Taiwan as part of China.

The recognition ended up being worth millions for Jammeh.

He also amassed vast sums from business deals he struck with financiers of Hezbollah, a militant group based in Lebanon, which the United States has designated as a terrorist organization since 1997.

In Hezbollah, Jammeh found wealthy investors who needed to launder their money to get around international sanctions — and gave them access to his country’s economy in exchange for a cut of their business.

The two moves defined Jammeh’s approach to international relations. Throughout his 22 years in power, from 1994 to 2016, he often defied the foreign policies of global superpowers – sometimes on principle, sometimes to line his pockets.

In a speech to the U.N. General Assembly in 2014, for example, Jammeh blamed the international community for “deliberately causing boats carrying black Africans to sink” and sending asylum seekers to “camps as bad as Nazi concentration camps.” He dramatically withdrew Gambia from the Commonwealth of Nations, describing the London-led organization as a “neo-colonial institution.” And he criminalized homosexuality, leading the European Union to suspend some of its aid.

Jammeh made a point of befriending political leaders who espoused anti-democratic ideals and used his antipathy to global powers to justify brutal human rights violations.

When Gambia hosted the African Union’s annual summit in 2006, he invited Iranian President Mahmoud Ahmadinejad, who gave a summit speech that so offended some European observers that they walked out.

Small economies run by authoritarian leaders make ideal international laundromats, not only for money being siphoned out of a country, but also for incoming funds that need to be cleaned up to appear legitimate. In both cases, a corrupt president can take a cut of the action.

Jammeh’s rule crippled Gambia’s economy by eschewing competition in favor of allocating monopolies to his patronage network. These monopolies helped key institutions, including the Central Bank of The Gambia, serve as money laundering hubs for funds deposited into – or used to invest in – the country’s financial systems, OCCRP reporters found.

The president’s willingness to work with Hezbollah allowed Gambia’s small economy to be manipulated for militant-related financing under the shield of its sovereignty.

Ali Charara, a key Hezbollah financier, paid $35 million for 50 percent of the state-owned telecom company, the Gambia Telecommunications Co. Ltd., known as Gamtel, and 50 percent of its subsidiary, known as Gamcel. The deal undervalued each company by half, according to Lamin Camara, who was then permanent secretary at the communications ministry.

Read more about Mohamed Bazzi, a Hezbollah financier who benefited from Jammeh’s rule, as well as other members of the president’s inner circle.

Another known Hezbollah funder, Kassim Tajideen, who is active in Gambia through Tajco, his business conglomerate, helped steer the country toward operating as the militant group’s financial laundromat.

Kassim and his brother Husayn were identified by the United States as key players in Hezbollah’s financing activities across Africa, including in the Democratic Republic of Congo, where the pair laundered tens of millions of dollars through companies including Congo Futur, which operates in the food and diamond trades under U.S. sanctions. Jammeh formally deported Husayn in 2013, but quietly allowed him to return to Gambia a few months later.

Read more about Gambia’s Stolen Future: A Plane Instead of Pensions

But Hezbollah’s most visible figure in Gambia was Mohamed Bazzi, a Lebanese businessman designated by the U.S. government as a key financier of the militant group. Bazzi was also one of the president’s closest non-government associates. 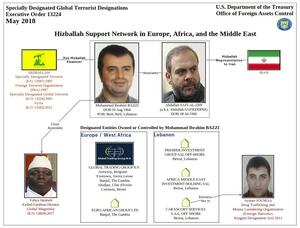 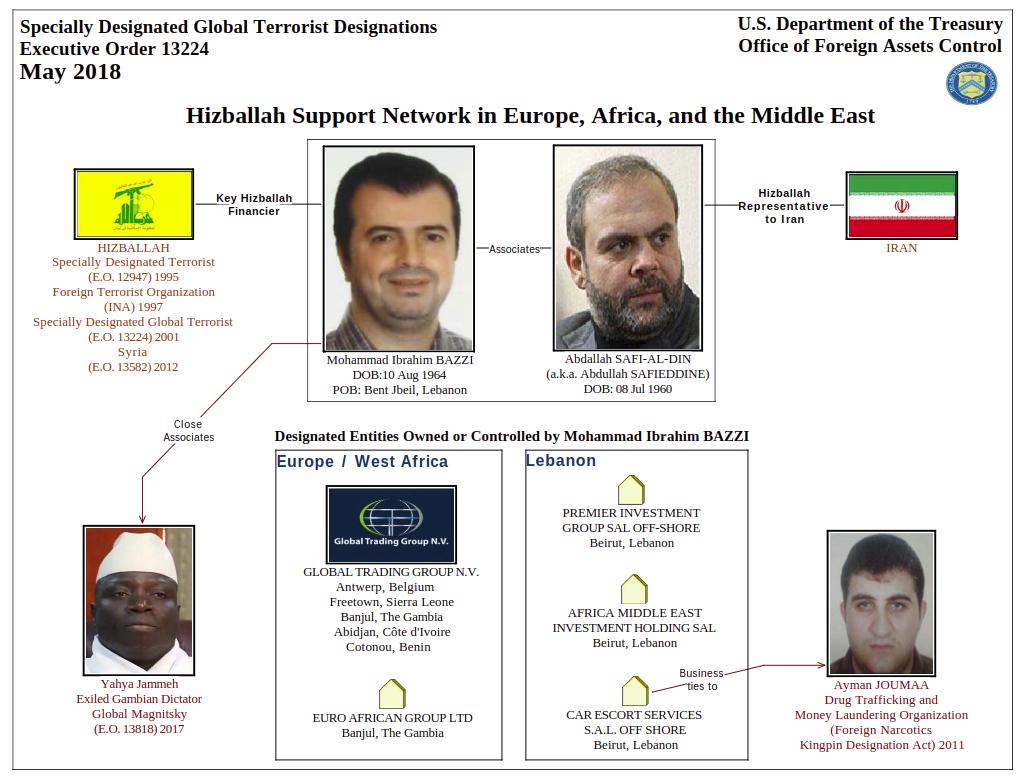 With Jammeh’s consent, the businessman and his network landed various monopolies — the most lucrative one cornered the country’s oil and fuel supply market — as well as deals in construction, vehicles, and biometric data.

Bazzi introduced Jammeh to Charara, who the U.S. government said had supported the militant group through multi-million dollar investments in commercial projects.

Throughout Jammeh’s years in power, he maintained a contradictory stance toward Hezbollah. He publicly expelled Tajideen and Charara on charges such as profiteering. But he allowed Charara to return to Gambia a short time later and resume doing business.

Similarly, money taken from public coffers, including pension funds and donor aid, benefitted Hezbollah, according to the U.S. Treasury. More than $100 million from Gambia’s telecommunications industry went to the group, according to OCCRP’s analysis.

The Tajideen brothers and Charara could not be reached for comment.

Jammeh had a shrewd eye for finding money in geopolitical disputes. In his dealings with Hezbollah, he allowed a militant group to use his country as a laundromat.

His relationship with Taiwan was simpler. When Jammeh broke with Beijing’s “One China” policy and recognized Taiwan as an independent country, he saw an easy path to aid with few questions asked.

The two countries immediately signed a “medical cooperation” agreement and the money began to flow to Gambia. When Jammeh wanted a military barracks, Taipei sent $250,000.

It wasn’t long before larger checks arrived. In November 1998, an $89 million grant was approved, with no designation for how it should be spent. In total, Taiwan gave Gambia more than $100 million in aid and soft loans between 1995 and 2015, becoming one of the country’s largest bilateral donors.

Correspondence obtained by OCCRP shows that Gambia also used Taiwan’s money to buy grenades and rifles. According to Jammeh’s directives, the arms were intended for Sudan, which had already allegedly received $40,900 in military support from Jammeh, and was engaged in an armed conflict in its southern states.

In 2009, Taiwan paid $3 million to an arms supplier based in Taipei for the weapons, documents show.

Taiwan’s ambassador to Gambia, Richard Shih, warned Jammeh in private correspondence obtained by OCCRP that the arms payments must be kept discreet. 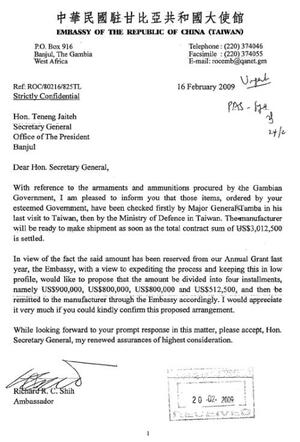 Credit: OCCRP A letter from Shih to Jammeh. (Click to enlarge)

“The Embassy, with a view to expediting the process and keeping this in low profile, would like to propose that the amount be divided into four installments,” Shih wrote in a Feb. 16, 2009, letter addressed to the Office of the President.

The following year, Jammeh’s office ordered $514,000 worth of rifles for the country’s use. In 2011, the government bought $2.3 million worth of rifles and ammunition. OCCRP could not verify whether the arms were sent to Sudan or used for other purposes. Documents obtained by OCCRP show that “small armaments,” including grenades, were transported to Gambia by ship.

The Taiwanese embassy in Nigeria, which is responsible for Gambia, did not respond to requests for comment.

Much of the other Taiwanese money disappeared into an account held at Citibank in the United States. The account, known as “Special 3M,” received $35 million primarily from Taiwanese aid between 2000 and 2001. The funds were sent from several banks, including ICB China and Mega International Commercial Bank. Yet in just under 150 transactions, records show, the money was depleted after the account appeared to be overdrawn and a total of $58 million was paid out.

Kagoro, the UNDP official for Africa, said the U.S. government might have asked banks to allow transactions to continue because it had its own agenda.

“There is the possibility that [U.S. banks] were ‘babysitting’ the money to see where it would go,” he told reporters.

From the larger pile of aid, Jammeh’s office directly withdrew $24.1 million as cash, according to financial records. More than $20 million was sent to foreign shell companies and companies belonging to his cronies, including Bazzi’s Global Trading Group and Tareq Musa’s TK Motors.

Neither Bazzi nor Musa responded to requests for comment for this story.

Some of the descriptions noted in Jammeh’s withdrawals defied comprehension. Transfer documents show he took $150,000 for a floating restaurant that was never built and over $400,000 for a luxury vehicle.

Often, large withdrawals lacked paperwork to indicate the use of the funds. They included $111,000 for a special driveway for Jammeh, more than $1 million for a new government building, and hundreds of thousands of dollars for security projects that were deemed too sensitive to discuss. 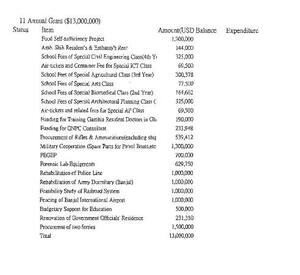 Instead, amateurish spreadsheets were sent to Taiwan indicating where the funds had allegedly been spent, but providing little supporting evidence. Many of the initiatives funded by Taiwan used special bank accounts to which Jammeh enjoyed unfettered access. These accounts included one for the President’s Empowerment of Girls Education Project, ostensibly a charitable initiative, which received at least $700,000, according to Jammeh’s directives. There is no evidence that these funds were used for the stated purpose.

At least $40 million in Taiwanese aid was provided as a cheap loan. It is unclear how the money was used.

China and Taiwan reached an informal agreement in 2008 to stop exchanging aid for recognition. Eventually, Taiwan’s aid to Gambia dried up, and in 2013, Jammeh abruptly ended diplomatic relations with Taiwan.

In the end — just before he was ousted — Jammeh managed to secure the aid he wanted. In 2016, Beijing broke its agreement with Taipei and began sending aid to Gambia.