The State Company that Fell Prey to the President

by Khadija Sharife and Mark Anderson
Tweet this Share this on Facebook DONATE
Above: Petroleum House, the headquarters of the Gambia National Petroleum Corp., in Banjul. Credit: Claire Bargeles/OCCRP

But when the managing director of the Gambia National Petroleum Corp. (GNPC) sent a note to the president’s office in July 2013 requesting a tax exemption for the company, Jammeh went after the funds.

The president had previously dipped into the GNPC’s reserves – sending its money to his own foundation, using it to pay for his flight crew, and buying airline tickets for a Jamaican dancehall star. But managing director Momodou Badjie’s request may have rubbed the president the wrong way, and he set about seizing full control of the state oil company’s accounts. 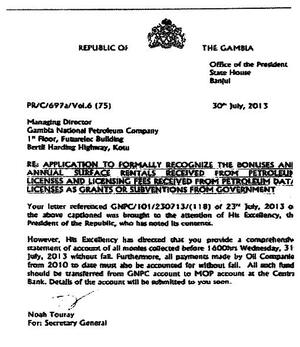 Just a week after receiving the letter, the president’s office demanded the company disclose, by 4 p.m. the following day, all income it had received since January 2010. The income, from selling petroleum data and exploration licenses and other sources, was to be turned over to a dedicated account at the central bank that Jammeh appeared to control.

Badjie did as he was told. In a letter sent the next day, he outlined two pools of money: $16.5 million in revenue and about $7.3 million1 remaining in capital held at several Gambian commercial banks, including Guaranty Trust, Skye, and Trust. 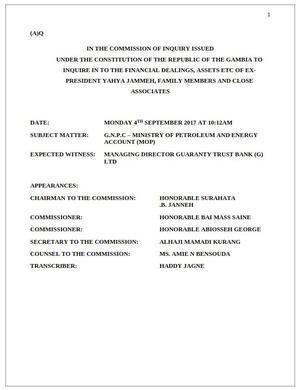 Within two weeks, officials from Jammeh’s office, including the president, had become signatories to multiple GNPC accounts at Guaranty Trust Bank, bypassing the required approval from the oil company’s board.

“When directives come from the Office of the President, you don’t wait for the board,” Badjie told the Janneh Commission of Inquiry, a government investigation looking into economic crimes during Jammeh’s rule.

After gaining control of the GNPC accounts, Jammeh spent little of the company’s revenue on oil-related business, according to OCCRP’s analysis of the data.

More than $55 million in illicit transactions were made using the oil company’s accounts, according to bank statements, presidential directives, and other confidential government correspondence. Jammeh appeared to personally authorize $18.5 million of this spending, which violated Gambian law. Almost $30 million of the payments appeared to be unrelated to the oil company. In other instances money was doled out through cash withdrawals.

In 2014 alone, Jammeh authorized the transfer of hundreds of thousands of dollars from GNPC accounts to the Jammeh Foundation, his own philanthropic organization, and Lebanese businessman Tareq Musa, a business associate. No purpose was stated for any of these transactions.

Separately, records of more than 8,000 banking transactions show that between January 2015 and August 2017, Mohamed Bazzi, one of Jammeh’s closest partners, received payment from GNPC accounts to his companies, such as Euro African Group and another entity, Gam-Petroleum Gambia Co., which he co-owned with the Gambian government.

These GNPC accounts ultimately paid out just over $500 million. The value of the transactions far exceed what a state oil company in a small country that doesn’t produce oil could possibly generate.

It is not known who the account signatories were.

Over 50 percent of the funds were received by just a few different recipients. The transactions show Euro African Group received over $60 million, more than any other recipient, while Gam-Petroleum got $9.2 million. Public officials, some apparently connected to Jammeh, received a total of $12.5 million.

Read more about Bazzi and the other members of President Jammeh’s inner circle.

The GNPC also received more than $12 million in deposits ranging from cleaning and real estate entities to security companies. It is unlikely that these funds were generated by the oil company’s own activities.

The origins of much of the $500 million paid out is not known to OCCRP.

The Dancehall Artist and the Flight Crew

Even before Jammeh’s office seized control of much of the oil company’s reserves, it had sometimes turned to the GNPC when the president was in a jam — and even when he wasn’t.

Jammeh seemed to take loans from government entities at will. In 2006, his office ordered more than $1 million from the GNPC accounts to be sent to the President’s Empowerment of Girls’ Education Project, ostensibly a charitable initiative. In total, more than $1.6 million was stolen from the state-owned oil company through this project, according to banking records obtained by OCCRP.

Companies including Hobo Entertainment, an obscure California-based media outfit, received $303,000. It is not clear from the documents what services Hobo provided.

Between 2013 and 2016, at least 40 percent of the money disbursed from GNPC accounts stated no clear purpose.

Read more about Jammeh’s Taiwanese Alliance and the Hezbollah Laundromat.

The accounts were also used to finance property purchases seemingly unrelated to Gambia’s oil industry and to pay taxes on behalf of other state bodies. In 2013, a $1.5 million loan was taken out on behalf of Gambia’s water and electricity utility, internal correspondence shows. The funds may have ultimately gone to Bazzi, identified by the U.S. as a key financier for Hezbollah, to whom the utility owed large debts.

The president also shuffled signatories on several accounts related to the GNPC and ultimately removed all signatories who actually worked for the company.

“We had no control over those revenues coming in at the end,” Badjie, the managing director, told the commission of inquiry.

Nuha Touray, the former secretary-general of the president’s office, also testified that cash from the company’s accounts was taken to State House, Jammeh’s official residence, where members of the president’s private household staff recorded the amounts into a small notebook in the presence of his closest aides.

Another tempting source of funds were the bonus fees paid by private oil companies to the state, ostensibly for training.

For example, African Petroleum, then owned by Frank Timis, a Romanian-Australian mining tycoon, paid $5 million in bonuses to the Ministry of Petroleum. At least some of these funds, as well as additional bonus payments from another company called Carnegie Mining, ended up in a special account the ministry held at Guaranty Trust Bank. 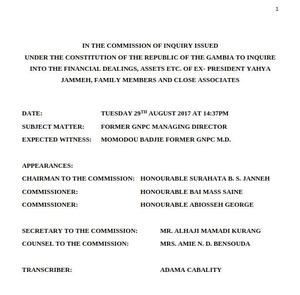 Jammeh was a co-signatory on that account with then-Petroleum Minister Sirra Wally Ndow-Njie. In 13 transactions ranging from $100,000 to $520,000, $3.9 million was withdrawn, largely by Ndow-Njie, to be paid out in cash or to unknown beneficiaries between 2015 and 2016.

Ndow-Njie told the commission she withdrew the funds on the president’s instructions.

“I was helpless,” she said. “You can imagine what would have happen to me if I were trying to [defy] his directive.”

In another part of her testimony, she says she “couldn’t talk [Jammeh] out of it.”

Guaranty Trust Bank, Mohamed Bazzi, and the managing director of Euro African Group did not respond to requests for comment. Musa and Momodou Badjie could not be reached for comment, but Badjie’s testimony to the commission is available here.

With additional reporting by Daniela Lépiz.