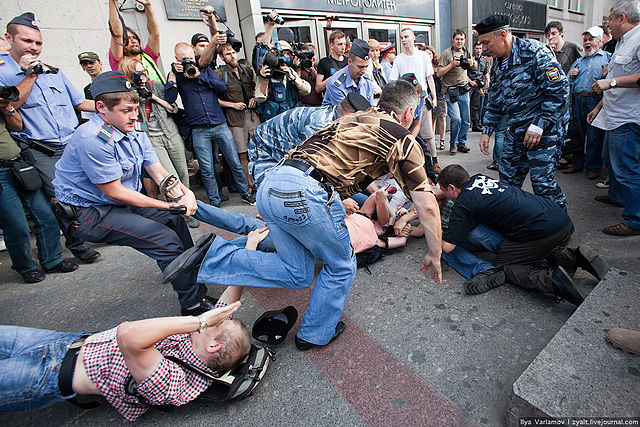 Brutality of Russian law enforcement agencies rises (Photo: Ilya Varlamov (CC BY-SA 2.0))It was allegedly the first time an official of the service that succeeded the notorious KGB was punished for torture in a country where, according to some polls, one in 10 Russians have been subjected to what they perceived to be torture or harrasment by law enforcement officials.

In the bizarre case of Ilya Kirsanov, the military court of the Leningrad region found the ex-officer guilty of “abusing powers with the use of weapon that caused serious bodily harm.”

During a 2018 search of the home of St. Petersburg businessman Igor Salikov - at the time suspected of having sexually tortured his wife’s lover - Kirsanov ordered Salikov to get down on his knees and raped him with one of the Tigr (Tiger) hunting rifles he found in the house. Salikov suffered severe internal injuries.

Salikov allegedly knew Kirsanov from a previous search of his house and reportedly recognized him when the officer took his mask off to drink some water.

Kirsanov was not dismissed from the FSB when charges were raised against him in May this year but his contract was not extended after it expired in June. The ex-officer was also ordered to pay some US$ 10,800 in rubles to his victim, Kommersant reported.

Meanwhile Salikov himself has been arrested for persuading his friends to sexually harass his wife’s young lover, who happened to be an investigator intern, according to reports.

In July last year the Russian newspaper Novaya Gazeta, a partner of the Organized Crime and Corruption Reporting Project (OCCRP), published a video recorded by an officer in a prison colony near Yaroslavl in central Russia, showing an inmate being tortured.

Following the case, but also several other serious scandals in the country’s prison system, the United Nations last year called on Russia to halt the frequent torture of detainees.