Tamas Bodoky, editor-in-chief of the Hungarian media watchdog and independent journalism outlet Atlatszo, has won the 2015 Index on Censorship Freedom of Expression Award for Digital Activism. 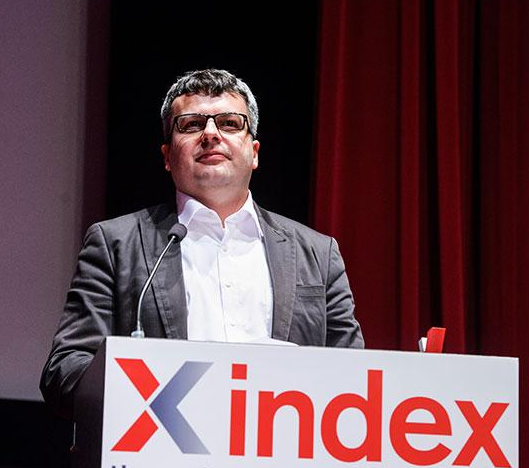 Atlatszo, an OCCRP partner, was founded in 2011 to bolster independent journalism in Hungary. Bodoky is being recognized for his work to “empower citizens in the face of this deteriorating situation for human rights.”

His digital activism includes investigative reports on the National Bank of Hungary and the Hungarian tax authority (NAV), as well as setting up a secure whistleblowing platform called MagyarLeaks which allows citizens to anonymously share tips and data with journalists.

Despite being placed on a non-governmental organization (NGO) blacklist by Prime Minister Viktor Orban’s government last year, Bodoky and Atlatszo continue their work.

In November 2013, Atlatszo worked with whistleblower Andras Horvath, a former employee of NAV, to write more than 20 articles on a large-scale VAT evasion scheme worth  € 3.2 billion (US$ 3.4 billion). NAV responded by accusing Horvath of libel, and police raided his home.

In a December 2013 interview with Euronews, Horvath said, “People who expose corruption have to be afraid.”

Atlatszo’s fraud reporting has been noticed. It announced on Jan. 22 that NAV would take the organization to court to demand an apology and a million Hungarian forints (US$ 3,518) in compensation. Bodoky says Atlatszo will fight the charges when the case goes to trial in May.

It appears that Hungary’s NAV has not been doing its job.

The US State Department took a stance against corruption within NAV by placing a travel ban on six Hungarian tax officials in October 2014. The State Department did not release the officials’ names, but Ildiko Vida, chief of the tax authority, admitted to being one of the six.

This month, an audit of NAV released by Hungary’s State Audit Office alleged that NAV failed to collect 3.8 trillion Hungarian forints (US$ 13.6 billion) from 2009 to 2014.

Horvath’s testimony in 2013 alleged that NAV was allowing billions of forints of tax fraud each year by deliberately failing to inspect particular companies, and not resolving system malfunctions. He cited an incident in which a tax inspector was allegedly ordered to stop an investigation into a large grain supply company that is suspected to have committed fraud worth a billion forints (US$ 3.6 million), according to Euronews.

Bodoky said it was the visa ban against tax officials in October that first “made clear for the larger public that there is corruption in Hungary, and that there is a problem.” Orban’s proposed tax on the internet in October 2014 added fuel to the fire, and about 100,000 Hungarians protested in Budapest as a result. The proposed tax would charge 150 Hungarian forints (US$ 0.62 at the time) per gigabyte of internet usage, with a household user cap at 700 forints per month and 5,000 forints for companies, according to Bloomberg.

International organizations, including Reporters Without Borders, have voiced their concerns about ruling party Fidesz’s increasingly authoritarian actions and its harassment of independent media. Most recently, Fidesz announced plans to implement a flat five percent tax on media income from advertising, hindering news sources that are not state-supported.

As international attention has focused on public protests and NAV, Fidesz’s approval ratings have plummeted by a third since winning last year’s general election.

Prime Minister Orban has shown little love for independent media or NGOs. According to Amnesty International’s 2014-2015 world report, the Hungarian government has carried out audits and investigations into 59 NGOs in the past year. The fact Fidesz maintained a parliamentary supermajority – that is, two-thirds of Parliament were its own members - until February this year meant that it could simply change the country’s constitution, even removing a ban on media monopolies, whenever it wanted to. This made it easy for Orban to crush opposition and he grew more and more powerful as he did so.

But as Fidesz approval ratings drop, the tide could be turning. In February, Orban’s close colleague, media mogul Lajos Simicska, turned on him publicly, criticizing a proposal for new taxes on media advertising as a tactic to shut down independent media.

Kim Lane Scheppele of Princeton University saw a shift: “Simicska is the one who bankrolled and directed the Fidesz media empire. So, suddenly, there is a diversity of views in the media as Simicska instructs his media to take his side in his personal fight against Orban, and Orban instructs his loyalists to boycott Simicska-controlled media.”

Later the same month, Orban’s party lost its supermajority in Parliament when an independent candidate, the civic activist and anti-racism campaigner Zoltan Kesz, won a seat in a by-election in the city of Veszprem.

Scheppele, writing for the New York Times, described the two-thirds majority as a “magic fraction” needed to accomplish anything in the Hungarian parliament.

Fidesz wrote into many laws the requirement for a supermajority of two-thirds to pass agendas, treaties and bills through Parliament – making governance without the supermajority very difficult. Fidesz used its supermajority 50 times from September 2014 to January 2015. According to Scheppele, “Most of the two-thirds laws passed since the last election further consolidate and centralized powers in ever fewer hands.”

Orban’s “magic” supermajority was lost when an independent candidate, the civic activist and anti-racism campaigner Zoltan Kesz, won a seat in a by-election in the city of Veszprem in February 2015. Now, each time Fidesz runs into a Parliamentary matter needing the two-thirds majority, it must seek support from those outside the ruling party.

However the absence of opposition politicians from Parliament has so far meant Fidesz still had a relative voting supermajority in Parliamentary sessions since February. It remains to be seen how the situation will be tolerated by Fidesz in the future.

What is certain, though, according to Bodoky, is that investigative journalism must continue to expose corruption at the core of Orban’s autocratic rule.

The digital activism award will strengthen Bodoky and Atlatszo while encouraging others to persevere in the face of lawsuits, investigations and blacklists to champion public access to information.

According to Bodoky, Atlatszo has won 60 percent of the freedom of information cases it has initiated. At the ceremony for the award in London on March 18, he implored the audience to keep fighting for independent media:

“I say Atlatszo will not be defeated. Hungary can have a fair and just democracy. Yes, it still can be done.”