For 20 years, Russian President Vladimir Putin has been hiding his daughters from his marriage to Lyudmila Putina. They lived under assumed surnames and never appeared in public in connection to him. He attributed this to security concerns and to their own reluctance to take on public roles. 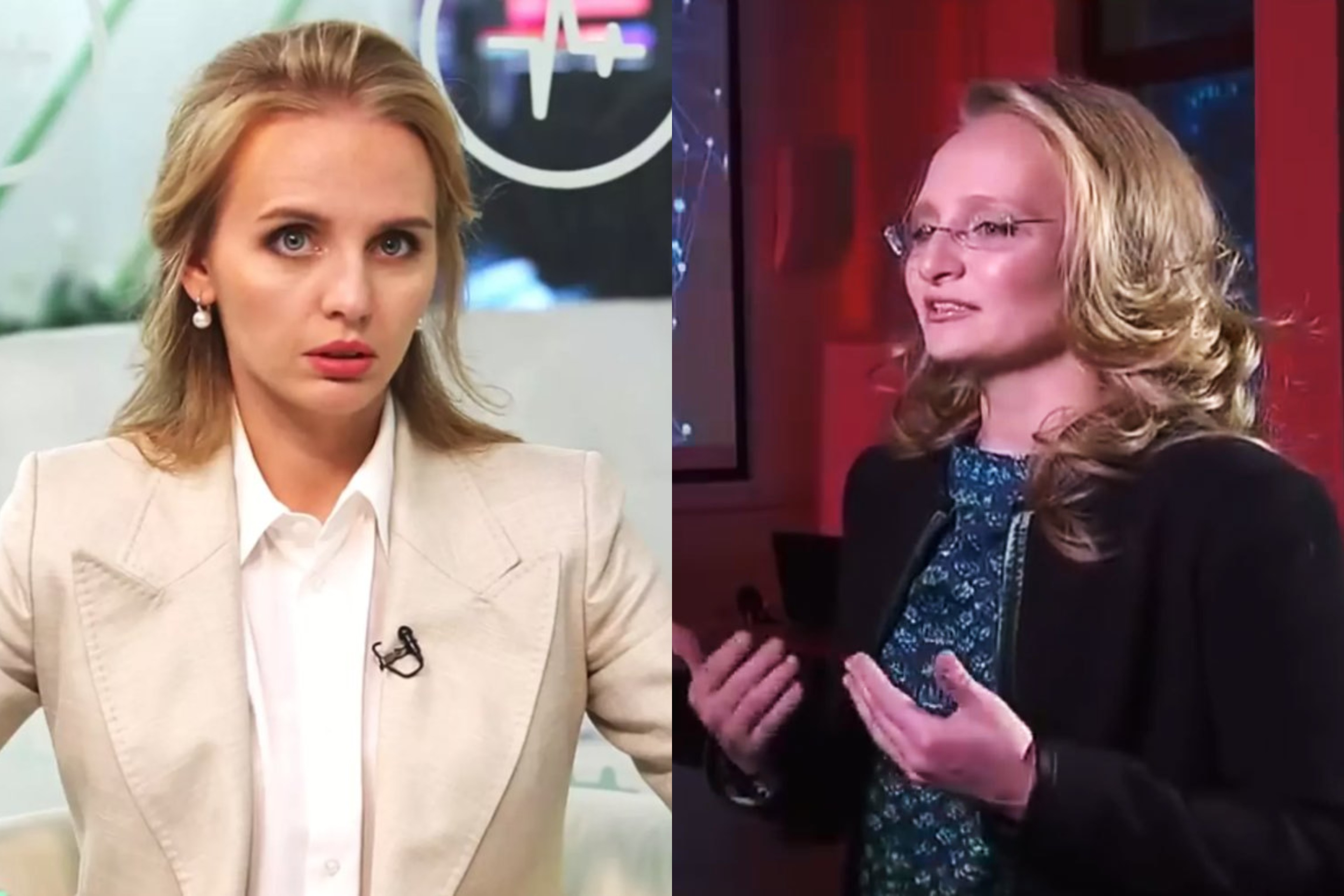 Even after the media reported that Katerina Tikhonova and Maria Vorontsova were the president's daughters and they began to appear in glossy reports on state television channels, Putin refused to acknowledge their relationship. Nevertheless, on April 6, the United States imposed personal sanctions against them. On the next day, Kremlin spokesman Dmitry Peskov essentially confirmed that the sanctioned women were Putin's daughters, acknowledging them himself for the first time.

When asked for the Kremlin’s opinion on the sanctions against Vorontsova and Tikhonova, Peskov said: “These sanctions are a continuation of this frenzied policy of imposing various restrictions. But in any case, the continuing policy of applying some kind of restrictions on family members, well, that speaks for itself. Such steps, such approaches hardly need any assessment. It’s something that’s difficult to understand or explain.”

Bloomberg noted that the imposition of sanctions against Putin's daughters is largely a symbolic move, since it’s unknown whether they have any serious assets outside of Russia. The intent is to draw the attention of the Russian president.

Here’s what we know about these two mysterious women.

The little that’s known about the childhoods of Putin’s daughters comes from the book First Person, published when he first became president in 2000. It was written by journalists Natalia Gevorkian, Natalia Timakova, and Andrei Kolesnikov, who personally interviewed Putin, his wife Lyudmila, his children, friends, and acquaintances.

According to the book, Maria was born in Leningrad in 1985 just before the Putin family left for Germany, where he worked as a spy until 1990. A year later Katerina was born in Dresden.

Maria's godfather is Sergei Roldugin, a cellist and close friend of Putin who made an appearance in the Panama Papers as a figure who seemed to hold money for the president. As reported by OCCRP based on that leak, Roldugin controlled offshore companies with over $2 billion in assets.

In 1996, Maria almost died in a fire at the family’s house near St. Petersburg. According to Putin's own recollections, the sauna of the house caught fire. While Katerina was on the first floor and managed to run out, her older sister had to be rescued. Putin found her in a room on the second floor, tied up some sheets and convinced her to use them to climb down from the balcony.

There aren’t many photos of Maria and Katerina as children. Until recently, there were no pictures showing their faces at all. The last official photos of Putin and his family were published in 2002 — but both daughters were shot from the back. 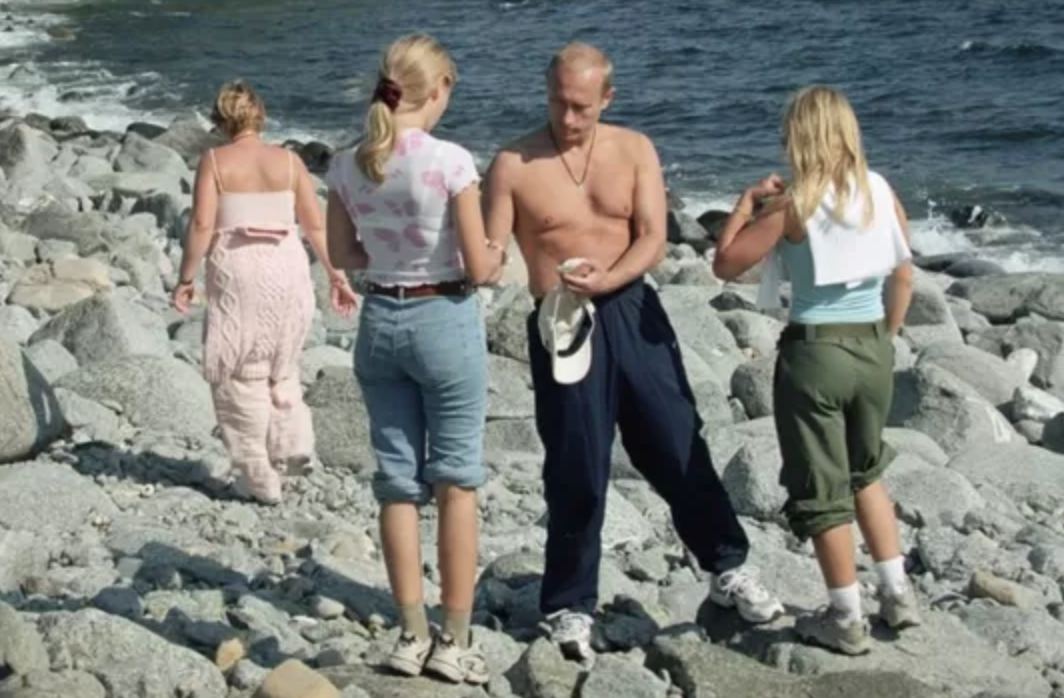 However, in June 2020, Sergei Pugachev, an oligarch formerly close to Putin, published some photos taken in the early 2000s at his home in St. Petersburg. In them, Maria and Katerina are surrounded by their friends and by members of the then-popular pop group Strelki.

The girls likely didn’t spend much time with their peers. Putin admitted that Maria was homeschooled since the ninth grade, and Katerina since the eighth. 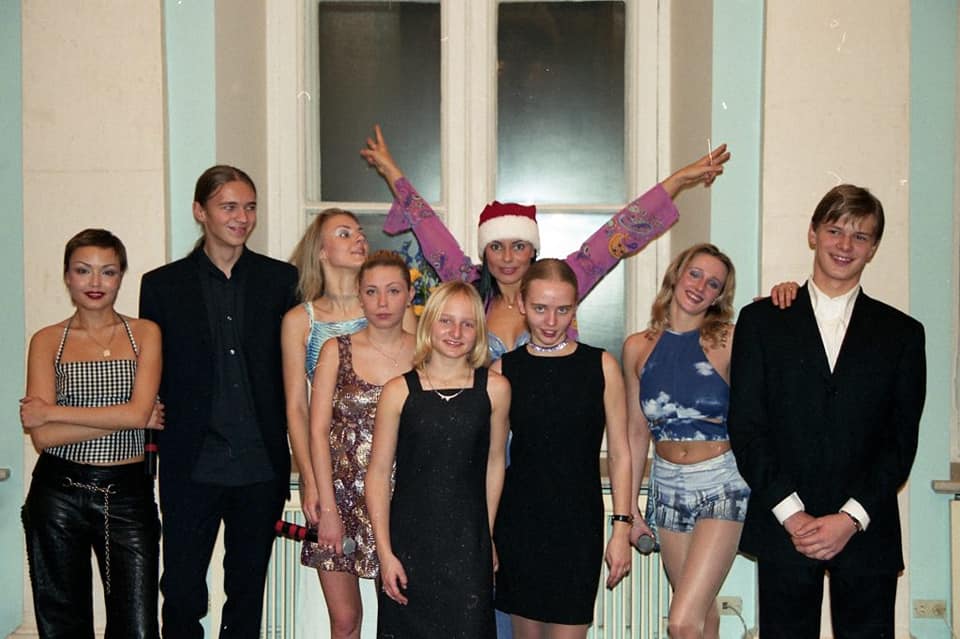 “Masha talks very seriously about ‘management,’ while Katya says she wants to be a designer, to design furniture,” Putin said when his daughters were still in school. But their lives turned out differently.

The Secret Comes Out

Until 2015, nothing was known about Maria and Katerina's careers or personal lives. The general public didn’t even know what they looked like. For a long time, tabloids mistook the young woman in this old photo for one of Putin's daughters. 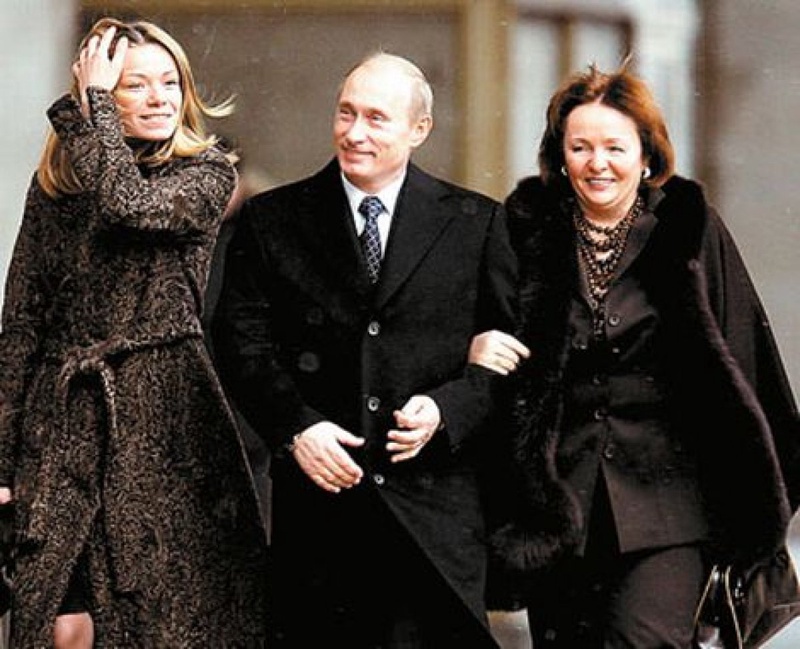 Vladimir Putin with his ex-wife Lyudmila (right) and a young woman who the media mistakenly described as his daughter Maria (left). (Credit: unknown)

Putin's family life would always be surrounded by a veil of secrecy, his spokesman Peskov said in 2013: “Rumors abound. But we never say anything about Vladimir Putin's family, and we never will.”

But it’s difficult to completely obscure the lives of two adults, especially if they’re involved in multi-billion-dollar government projects.

In January 2015, the Russian outlet RBC published an investigation into plans to build a scientific center at Moscow State University in southwest Moscow. The report named Katerina Tikhonova as the head of Innopraktika, the company that was implementing the project, without mentioning any connection to Putin.

On the next day, Reuters and Bloomberg reported that she was his youngest daughter.

At the time, Peskov said he didn’t know any Tikhonova and only dealt with the president’s affairs. This only fueled interest in Tikhonova's identity, and late in 2015, Reuters learned more details about her. The agency reported that Tikhonova was into acrobatic rock and roll and even placed fifth at a tournament in Switzerland in 2013.

The bulk of that amount came from Shamalov's stake in Russia's largest petrochemical company, Sibur. He owned nearly 21 percent of its shares, receiving his first 3.8 percent for only $100, as reported by iStories, an OCCRP partner. Tikhonova and Shamalov later divorced, and Shamalov sold а large portion of his Sibur stake and left the company’s board at the end of last year.

Reuters also wrote about Putin's second daughter, Maria, reporting that she had taken a foreign last name, Faassen, from her husband, Dutch citizen Jorrit Faassen. It is not known when they married, but by 2007 Faassen was appointed a manager of the state-owned Gazprombank and later became vice president of Stroytransgaz, one of state gas giant Gazprom's largest contractors.

In 2011, Faassen was beaten up in Moscow by the security guards of a banker named Matvey Urin because Faassen’s car had not allowed Urin’s motorcade to pass. This ended up being a costly affair for Urin. Almost immediately, his motorcade was personally stopped by the head of the Moscow police department, Vladimir Kolokoltsev, not far from the Kremlin. Urin and his guards were first sentenced to 3 years in prison for hooliganism, then Urin got another 7.5 years for fraud. Kolokoltsev, on the other hand, was given the position of Minister of Internal Affairs. 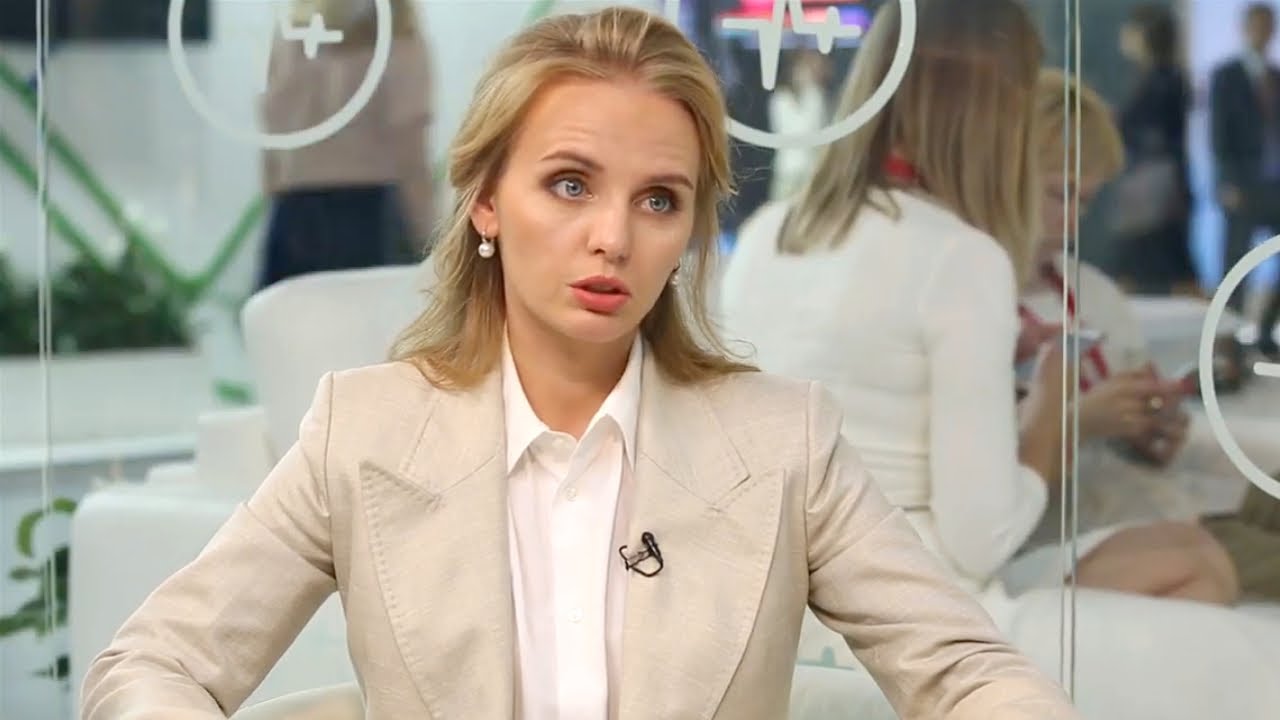 According to several media outlets, it was Faassen’s relationship with the president's daughter that explained why Urin had to pay so dearly for beating up a foreigner. The fact that Maria Faassen also has another surname, Vorontsova, was reported in early 2016 by The New Times magazine. The origin of this surname is unclear, but the outlet reported that Vorontsova-Faassen lives in an elite house in the center of Moscow with a view of the U.S. Embassy, and published photos of her taken in the Netherlands, Italy, and Japan.

“If you believe the Internet, Maria Vorontsova-Fassen has the widest and most diverse circle of acquaintances, indicating that neither Maria nor her friends pay attention to the lamentations of state propaganda about ‘gay Europe,’ ‘Ukrofascists,’ or enemies from NATO,” The New Times wrote.

Vorontsova and Faassen have a son, who by now should be 8 or 9 years old. Recently, the Dutch publication Follow the Money managed to speak with Faassen, who said that he does not have any relationship with Maria.

A new joint investigation by Meduza and Current Time reveals that Vorontsova has a new husband named Yevgeny Nagorny. Like Faassen, he has not formalized his relationship and lives with the president's daughter in a civil marriage. Nagorny and Maria also have a child, according to the investigation. Most likely, Putin was talking about him in 2017 when he said that he recently had a second grandchild.

Maria and Katerina's careers are similar. Both have PhDs and are involved in large-scale government-supported projects.

As reported by the Russian service of the BBC, Vorontsova graduated from Moscow State University's Department of Fundamental Medicine in 2011 with a medical degree. Until 2014, she did her residency at a pediatric endocrinology research center under the Ministry of Health. She did her postgraduate studies at the same institute, and later defended a dissertation about dwarfism called “Treatment of Children with Pituitary Nanism with Growth Hormone Preparations: Medical and Economic Aspects.”

In 2019, it was reported that Maria runs a medical company called Nomeko and participates in a large healthcare investment project: the creation of a multidisciplinary medical complex for 40 billion rubles ($615 million). As an endocrinologist, Maria often appears in stories on state television. She is also interested in genetics and supervises another multi-billion dollar project in this field.

Her younger sister Katerina studied at St. Petersburg State University and Moscow State University, and in 2019 she defended her doctoral thesis there, devoted to the study of the vestibular system. One of Tikhonova's scientific supervisors was Viktor Sadovnichy, the university's rector.

Since 2013, Tikhonova has led Innopraktika, a company that supports young scientists. As its director, Tikhonova supervises the Moscow State University’s expansion project, the so-called “MSU Valley” (in reference to Silicon Valley). Its cost has been estimated at 120 billion rubles ($1.8 billion). Innopraktika is also known for earning hundreds of millions of rubles from contracts with state companies.

Putin may also have other children. In 2019, tabloids reported that former gymnast and Olympic champion Alina Kabaeva gave birth to twins in Moscow. The identity of their father is unknown. But in 2008, the newspaper Moskovsky Correspondent had reported on the impending marriage of Putin and Kabaeva. A few days later, the paper closed down.

In 2013, Putin officially announced his divorce from his wife Lyudmila. But it’s unknown whether Russia has had a new first lady since then. Kabayeva gives no interviews and hardly ever appears at social events. Since 2014, she has chaired the board of directors of the National Media Group, which includes Channel One, one of the main mouthpieces of Kremlin propaganda.

Much more is known about Svetlana Krivonogikh and her daughter Elizaveta, about whom Russian outlet The Project reported in 2020. According to the report, Krivonogikh owned residential real estate worth 1.1 billion rubles ($15 million) at the time of publication. Her neighbors included Putin's judo sparring partners Vasily Shestakov and Arkady Rotenberg, as well as the president's associates at the Ozero dacha cooperative Yury Kovalchuk, Sergei Fursenko, and Nikolai Shamalov.

Krivonogikh owns 2.8 percent of Bank Rossiya, which is controlled by Kovalchuk. She is also a co-owner of the ski resort near St. Petersburg where Katerina Tikhonova married Kirill Shamalov in 2013.

Two of her acquaintances told The Project that Krivonogikh and Putin were in close contact, but the romance reportedly ended by 2010.

Krivonogikh’s daughter Elizaveta was born in 2003. Documents seen by The Project do not indicate Elizaveta’s father. Only her patronymic,Vladimirovna, is known. Her appearance certainly bears a striking resemblance to Putin. But there is no official confirmation that she is the president’s daughter.