The Ups and Downs of a Russian Anti-Doping Whistleblower

Dressed in gray coats with white scarves, Russian athletes marched into South Korea’s Pyeongchang Stadium carrying the Olympic flag instead of their own. 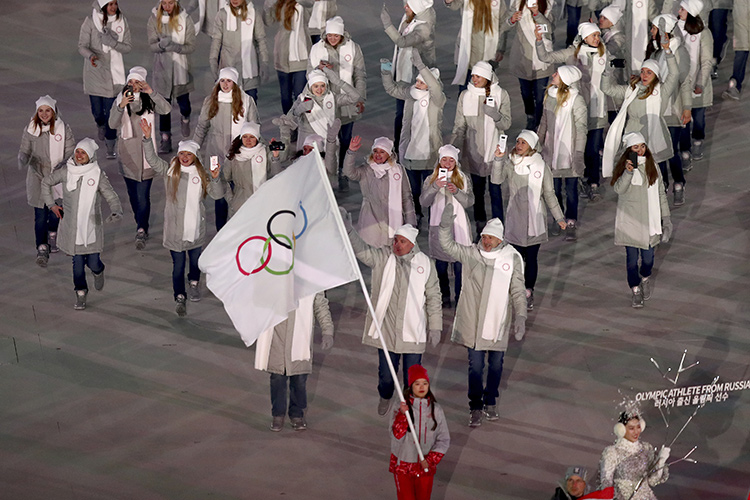 In the wake of a massive doping scandal that saw Russia’s Olympic Committee suspended, just 169 of the country’s sporting heroes have been allowed to compete as ‘neutrals.’

On the day the Games opened, CNN International showed some of them putting a piece of duct tape over the word ‘Russia’ on their bag before boarding the plane to Pyeongchang. Gold medal or not, they will not hear their country’s national anthem as they stand on the podium.

But for Grigory Rodchenkov, the architect of Russia’s state-run doping scheme – who since has turned whistleblower – the punishment is nothing compared to the gravity of the Russian crime.

In an interview with the Organized Crime and Corruption Reporting Project (OCCRP) on Rodchenkov’s behalf, his lawyer James Walden vented about what he said was an international sporting system that had been too soft on Russian athletes’ state-supported cheating.

In a ruling a week before the start of the Games, the Switzerland-based Court of Arbitration for Sport lifted a life-long ban on the 28 Russian athletes who had appealed the initial International Olympic Committee’s decision.

The ruling “emboldens cheaters,” said Walden. It “makes it harder for clean athletes to win, and provides yet another ill-gotten gain for the corrupt Russian doping system generally, and Putin specifically.”

The 28 athletes had hoped the Swiss ruling would be their ticket to Pyeongchang. But just hours before the opening ceremony, the IOC decided not to invite them anyway – a move Walden called “a small semblance of justice for clean athletes.”

Russia had put in place “an organized system mandated and funded by high level government officials to systematically allow athletes to use performance enhancing drugs and avoid detection,” Walden said.

Holding a PhD in analytical chemistry, Rodchenkov was seen as one of the world’s leading experts on doping. He was appointed as director of the Moscow anti-doping laboratory in 2005.

But by 2011, Russian authorities were investigating him on suspicions of trafficking doping substances.

In the Netflix documentary “Icarus,” Rodchenkov says the charges were suddenly dropped after he agreed to lead the country’s doping program. It was a plan, Rodchenkov says, to boost Russia’s flagging standing in international sports.

The 2010 Winter Games in Vancouver, Canada, saw Russia finish 11th on the final medal table with just three gold medals. It did not sit well with then Prime Minister Vladimir Putin, who was facing declining popularity.

The Kremlin devised a strategy: to succeed in sports by any means necessary. The opportunity was the 2014 Winter Olympics in Sochi, Russia. The man to do it was Grigory Rodchenkov.

Whiskey, Martini and a hole in the wall

A finger of Chivas whiskey for the men. A splash of Martini for the women. These two drinks were chosen by Dr. Rodchenkov to absorb his newly-designed drug cocktail containing metenolone, trenbolone and oxandrolone – three anabolic steroids – and to shorten its detection window. It took him years to find the right combination and dosage.

Rodchenkov claims that many Russian athletes had used his ‘magic potion’ ahead of the London Olympics in 2012 and throughout the Sochi Games two years later.

Pulling off the scheme was no easy feat, especially under the watchful eyes of many dozens of international specialists. The Olympic anti-doping laboratory operates daily throughout the Games, while nearly 100 people staffed the Sochi lab, including Rodchenkov and some of his Moscow colleagues. The other lab employees were anti-doping experts from around the world. They could have blown up the Russian plan at any time.

With the help of members of the FSB, the Russian intelligence service, positive urine samples were swapped with negative ones through a tiny hole in the wall of the laboratory.

The secret service also helped open the supposedly impenetrable urine bottles which were produced by Berlinger Group, a Swiss company, for use in all international sporting competitions. The information about whose urine samples were to be swapped was provided to Rodchenkov by a sports ministry official each night, the New York Times reported.

It worked. Russia finished the Sochi Games on top of the medals table, having won gold 13 times. Vladimir Putin personally awarded Rodchenkov with the Order of Friendship.

In 2015, the World Anti-Doping Agency, WADA, released a preliminary report detailing doping violations during the Sochi Games based on a documentary aired by German broadcaster ARD a year before.

As a result, the Moscow anti-doping center was expelled from WADA and Russia was banned from taking part at any track and field competitions indefinitely.

Despite immediate and strong objections by Russian sports authorities, Rodchenkov and other top anti-doping officials were forced to resign.

Then it got dangerous.

According to Rodchenkov’s lawyer, it was clear that his client was next.
“Someone from the Kremlin approached him and told him he was going to be the target of an assassination. He had no other choice but to escape Russia,” Walden recalls.

Rodchenkov fled to the United States and now lives at an undisclosed location.

“Whether or not the Russians will find him and carry out what they intended to, he thought it was important to disclose everything, hold the Russians accountable, and help a reform take place”, his lawyer said.

Consequences with “bells and whistles”

Rodchenkov’s testimony formed the basis of a report that was put together by Arthur McLaren, an independent expert hired by the International Olympic Committee.

“The Moscow Laboratory operated for the protection of doped Russian athletes within a state-dictated failsafe system,” the report read.

“The Ministry of Sport directed, controlled and oversaw the manipulation of athlete’s analytical results or sample swapping,” it continued, calling the plan “an institutional conspiracy.”

Over 1,000 Russian summer and winter athletes benefited from the doping scheme, which was overseen by Russian Sports Minister Vitaly Mutko.

One would assume the penalties for Russia’s behaviour would be harsh, given the Olympic Charter’s commitment to “seek[ing] to create a way of life based on the joy of effort, the educational value of good example, social responsibility and respect for universal fundamental ethical principles.”

But the International Olympic Committee allowed clean Russian athletes to compete at the 2016 Summer Games in Brazil and as ‘neutrals’ at the Winter Games in South Korea.

The neutral-toned outfits the athletes wore during last Friday’s opening ceremony were a far cry from the glamorous fur trims and puffy coats in national colors their flag-bearing colleagues had worn in Sochi. 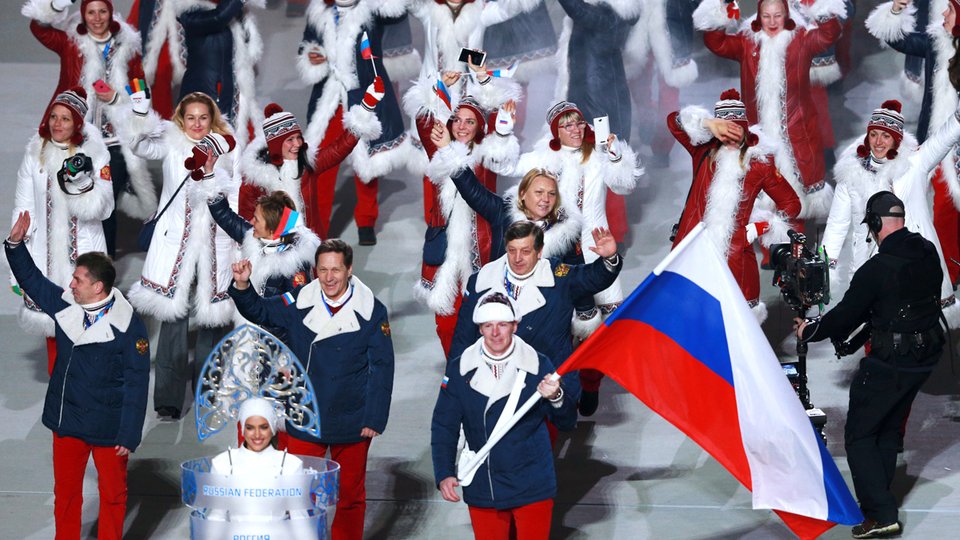 Russian athletes enter the stadium at the opening ceremony of the Winter Olympics in Sochi, Russia, in 2014. (Photo: http://premier.gov.ru/)

However, the emblems on their scarves read “Olympic Athlete from Russia.”

Walden said that allowing the word ‘Russia’ on the uniform was a compromise the IOC reached with Moscow under public pressure to appear tough while “providing Russians with enough bells and whistles that they agreed to go along with it.”

“An imbecile with obvious problems”

Having once received the Order of Friendship from the Russian leader, he now believes he is an assassination target.

“Rodchenkov should be shot for lying, like Stalin would have done,” said Leonid Tyagachev, the former head of Russia’s Olympic Committee who remains its honorary president, as quoted by the Guardian.

Last week, Putin himself weighed in, referring to Rodchenkov as “an imbecile with obvious problems.”

Discussing the scandal with the government-owned news agency TASS, Putin dismissed Rodchenkov as a witness. “Everything is based on the statements by this man who can hardly be trusted anyway, had been engaged in unlawful activity and should have been jailed,” he declared.

Walden, however, said that Rodchenkov’s version of events had been verified by forensic evidence, other whistleblowers’ accounts and, more recently, recovery of the Moscow lab’s secret database, which allegedly shows thousands of dirty tests that were covered up.

“We no longer have proof beyond reasonable doubt, we have proof with mathematical certainty,” concludes Walden. Yet the lawyer believes that none of this mattered in Russia, where in his view the government’s actions against Rodchenkov have been merciless and deliberate.

“First harass his family, seize his property, indict him for abuse of office and try to get Interpol to accept the warrant”, Walden said of Russia’s moves against his client.

“And when Interpol rejected that warrant, then they indicted him for drug trafficking” he sighs. “It's ridiculous.”