Three years after I investigated bogus international awards sold for thousands of euros, I got invited to pick up mine -- for a small fee of just €4,750. 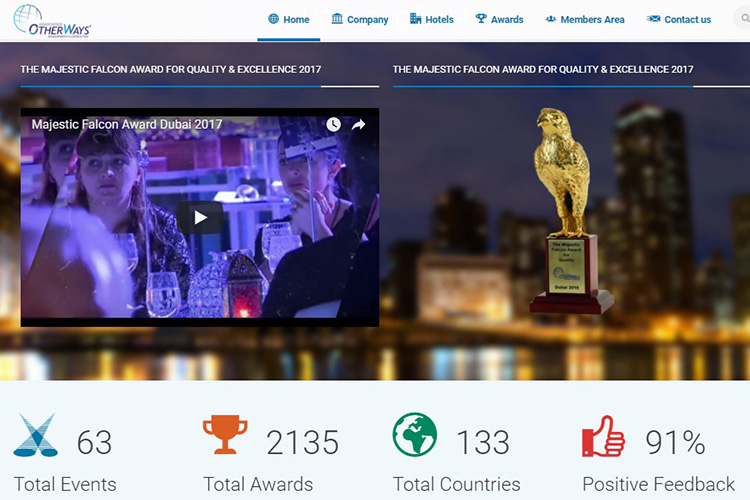 A screenshot of the Otherways web site.

It was a Monday in mid-September, around noon, when the email arrived.

Headlined “The Majestic Falcon Award for Quality & Excellence VIDEO,” it addressed me as “Dear Awardee” and invited me to come and pick up my award at a November ceremony in Dubai.

I wrote back expressing my gratitude and asked them to confirm me as a recipient. I also inquired about costs and other organizational details. Three days later, I got a reply.

This time, the lengthy and very generic note referred to me as the representative of a “company” and revealed that the award would come not with prize money, but a hefty price tag.

The €4,750 in “participation fees” would cover the right to reproduce the award materials, two nights in a hotel, two invitations to a cocktail party, a gala dinner with an award ceremony, and photos and video of the event (sent via DHL). In addition, I would still have to cover my own visa and plane ticket.

News of winning a fancy-sounding international award would put a smile on the faces of many people. But I had a different reason to laugh. Three years ago, I investigated a number of organizations which hand out dozens of such bogus awards -- all for money.

Otherways, which sent me the email, was one of them.

“The organizations all find new nominees in the same manner. They say they research and choose the best, but in reality in most cases they send out hundreds of email invitations ... Anyone who replies, shows interest and agrees to pay gets an award,” read the story I wrote with Dragana Peco for the Organized Crime and Corruption Reporting Project (OCCRP) and the Center for Investigative Journalism of Serbia (CINS).

“Let’s see how much money they make with this,” I thought, and contacted DHL and the JW Marriott Marquis Hotel in Dubai.

The DHL shipment would cost between €90 and €115, depending on whether the package would be shipped to Belgrade from Dubai or from Paris, where Otherways is based.

That leaves about €3,700 to cover the award ceremony, participation costs, and the rights to the award materials.

Three years ago, when I contacted Otherways as a journalist, they explained that their criteria for choosing awardees were strict, and that not just anyone who offered money would be honored: “We do not sell potatoes,” Still, they noted that organizing an event requires high expenditures, and that since they do not have sponsors, they are forced to levy “humble participation fees.”

The full name of the organization, which contacted me on Sept. 11, 2017, is Otherways Management Association Club (OMAC). Its website does not reveal much -- not even the list of all previous winners.

Its “Company” section used to say that Otherways had been founded by Charbel S. Tabet “18 years ago” – 21 years ago today.

However, that information was removed from the website after OCCRP/CINS published the original story in October 2014. At the time, the site also stated that, in 18 years, Otherways had given out 2,635 awards -- an average of 146 per year. In a 2015 ceremony video, however, the company say it’s their 15th anniversary. The website now says that the total number of awards is 2,135.

Tabet, the founder, usually hands out the awards at ceremonies personally. He was previously a consultant for a similar organization, the Global Trade Leaders’ Club (GTLC).

As director and founder of the company Foodica Best Foods, he received a GTLC award in 1994.
The company later received awards from Otherways, too.

In other words, two organizations he represented made an award to a third he headed.

Besides Otherways and GTLC, OCCRP/CINS identified four other organizations that sell vanity awards: the Europe Business Assembly, the Business Initiative Directions, Actualidad Magazine, and the European Society for Quality Research.

Between them, these organizations have sold more than 250 awards to individuals, institutions and public and private companies in Serbia and Bosnia and Herzegovina since 2000.

Reporters for OCCRP/CINS could find no evidence of any competitions, judging, or even any set criteria used to determine the winners, most of whom originated from Africa, Asia, South America, and Southeastern Europe. It appears that anyone who pays enough money can win an award.

Not much seems to have changed since we wrote the article. I was now personally invited to join the likes of Ibrahim Jusufranic, who received several bogus awards, including the Actualidad in 2004, on behalf of Sarajevo’s city transportation company, which he ran at a time even as it reported tens of millions in losses. He was later arrested for embezzlement of company funds. The trial is ongoing.

Or, perhaps, the Serbian state-owned pharmaceutical company Galenika, which was honored with an award in 2009, but later became the subject of an investigation and prosecution. Two trials are ongoing against former managers of the company, both indicted on charges of embezzling millions.

Who wouldn’t want that?

So, pretending to be an interested potential recipient, I asked Otherways to tell me more about the award they were offering in September. In reply, they said that they conduct “8 different conventions and awards in 2 years’ time in London, Paris, Geneva, Berlin, Rome, New York, Dubai,” and that the award is “a communication tool serving the interests of the companies” that would help them make their firms known in a multi-sector forum, exchange experiences, and find out about new technologies and markets.

The longest segment of Otherwys’ email explained how they choose the winners. “The selection criteria for the Quality Summit are based on information, polls, and voting,” it said, adding that the final decision is made by “the Majestic Falcon Award for Quality & Excellence selection’s committee.”

There’s more: “The Majestic Falcon Award for Quality & Excellence is presented to each Company as entity, for corporate achievement, to recognize prestige, Innovation, Quality & Technology. For this purpose, a voting process is carried out by mail, Internet or within awarded companies, based on one several of the following concepts: Customer Satisfaction, Leadership, Continuing Education and Trading, Business Results, ISO 9001- 14001-22000, TQM and TQCS (Top Quality Customer Satisfaction Standards.)”

So that’s how they chose me.

They evaluated the satisfaction of my customers, my leadership skills, my continuing education and trading as well as my business results.

At this point I would like to remind the reader of the fact that I am a journalist who helped expose bogus awards, including the one Otherwise was proposing to give me.

So after telling me about all the details about me that they carefully reviewed, the next phase would be for me to fill out the registration form, which requires basic information about the awardee and 300 words on my “Organization’s activities, background history and achievements.”

Many decide to accept the honor, including public institutions -- which mean that some pay the fees with taxpayers’ money.

“Otherways has experience and respect doing selections and promotion of successful company all around the world,” read a comment on the Otherwise website on behalf of state-owned Sarajevo-based BH Telecom.

“We are witness for inauguration of our company [at the] Geneva “night” where we had feel grateful for all this effort. We wish to you and Otherways all the best in the future,” the note added.