The head of the village appears to have abused a new land-titling system intended to help illiterate farmers, using it to take control of a chunk of former state land for himself, according to an investigation by iFact. 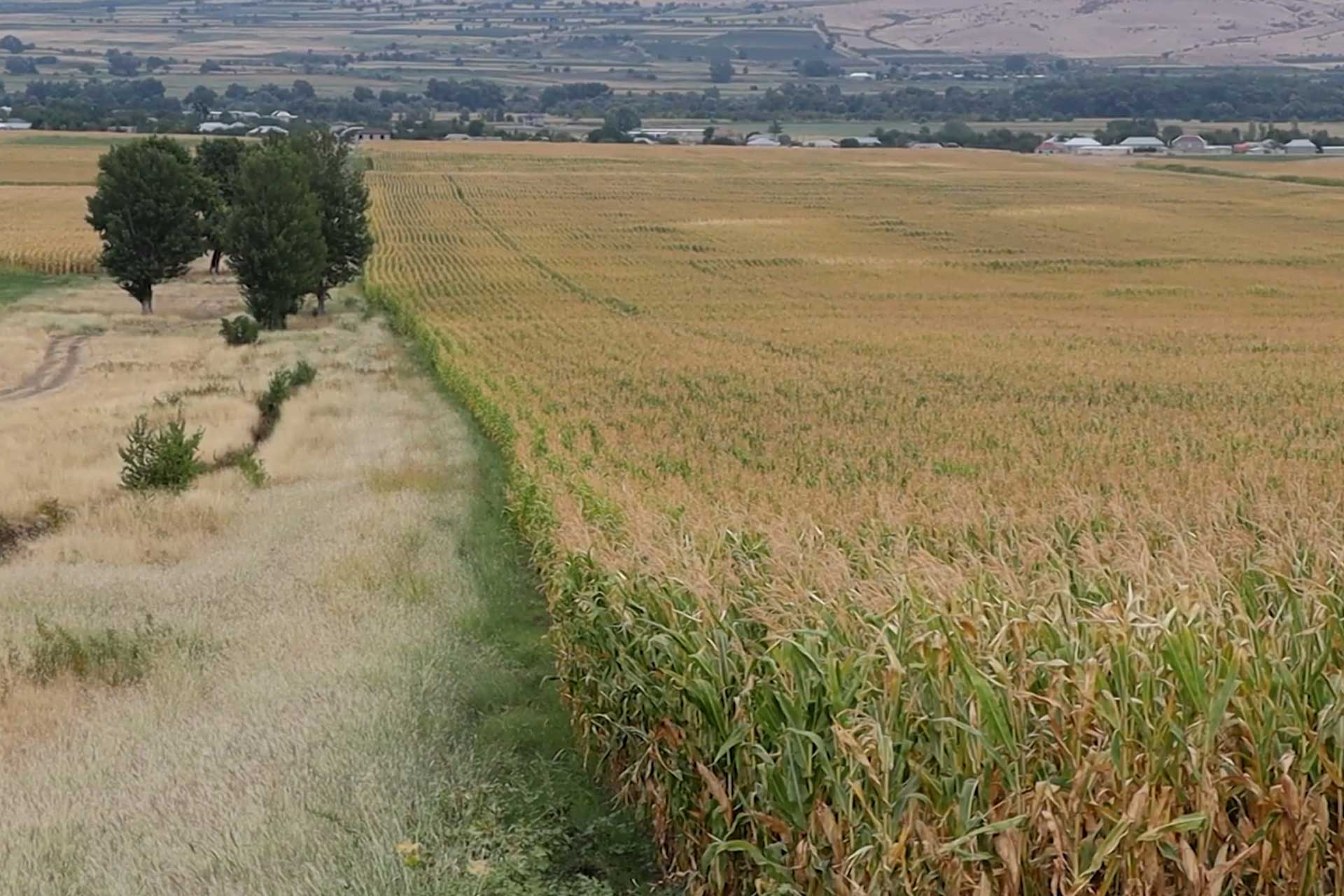 Plots of land in Duzagrama under the control of Mukhtar Ismayilov. (Photo: ifact.ge)

In Duzagrama, a small village nestled in a lush valley in the southeastern corner of Georgia, history is written on the land.

During the Soviet era it was home to a state-run farm, known locally as a kolkhoz, but after the Soviet Union collapsed, the collective was liquidated. For years afterward, villagers continued to work individual plots of land on what had been the kolkhoz, growing corn and alfalfa, or grazing cattle and sheep. But a series of legal reforms allowing farmers to claim the land they had been cultivating have now redrawn the map of this sleepy village.

Since at least 2020, the village’s head of administration, Mukhtar Ismailov, has abused the new system to take control of a chunk of former state land for himself, according to an investigation by iFact, one of OCCRP’s partners in Georgia. By analyzing land records and collecting more than a dozen interviews, reporters learned Ismailov and his family had acquired at least 60 hectares for free to the south of the village, and leased another 30 in the name of a proxy. Often, Ismailov used the names of other people to claim the land, then farmed or leased it out himself — in some cases, without their knowledge.

One unsuspecting proxy was Askinaz Sultanova, 67, who was shocked to learn that she owned just over a hectare of former state land on the outskirts of Duzagrama. The plot was registered in Sultanova’s name in May 2021, according to ownership records, but the illiterate grandmother said she has no idea how that happened. Villagers say the land is now being farmed by Ismailov, who Sultanova said had personally helped her to renew her passport. 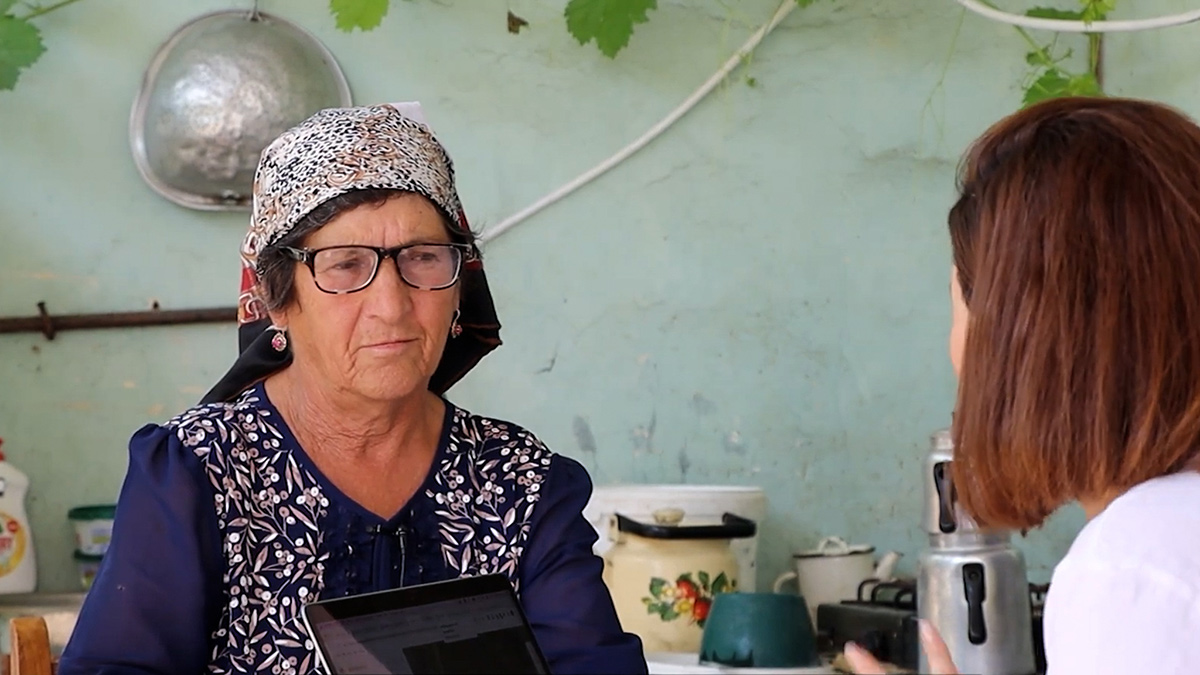 67-year-old Askinaz Sultanova, who did not know that she had land in her name. (Photo: ifact.ge)

“No, my dear, I don’t have any land anywhere,” Sultanova told a reporter from iFact, sitting on the vine-covered terrace of her small home in Duzagrama in late August. “I can’t even read or write. [When signing documents], someone holds my hand [to show her where to sign], and I just make a cross. I don’t own any land.”

In late October, after iFact first published its findings, the Georgian prosecutor’s office charged 13 people from the Sagarejo municipality, where Duzagrama is located, with fraudulently acquiring state land and abuse of office. The defendants have admitted their guilt and a court has ruled that the land, worth over $40,000, must be returned to the state, according to a press statement. Prosecutors did not specify if the village was Duzagrama, or name any of those charged, but said they included “former representative of the Mayor of Sagarejo Municipality” — Ismailov’s official title.

The office declined to give any more details. Ismailov denied that he was the subject of the investigation when contacted by reporters, saying he had done nothing wrong. “The prosecutor’s office doesn’t have a case here to summon me about,” he told OCCRP.

Ismailov claimed that the villagers denied being the true owners of the land registered in their names simply because they were scared. “They’re villagers, they don’t speak Georgian, they’re afraid,” he said, referring to the fact that many people in Duzagrama are ethnic Azeris.

Although Azeris make up over 6% of the population of Georgia, making them the country’s largest ethnic minority, they are often poorly integrated and do not always speak or read Georgian.

A spokesperson for Sagarejo’s mayoral office said she had “no information about the assets [Ismailov] owns,” and declined to comment further. 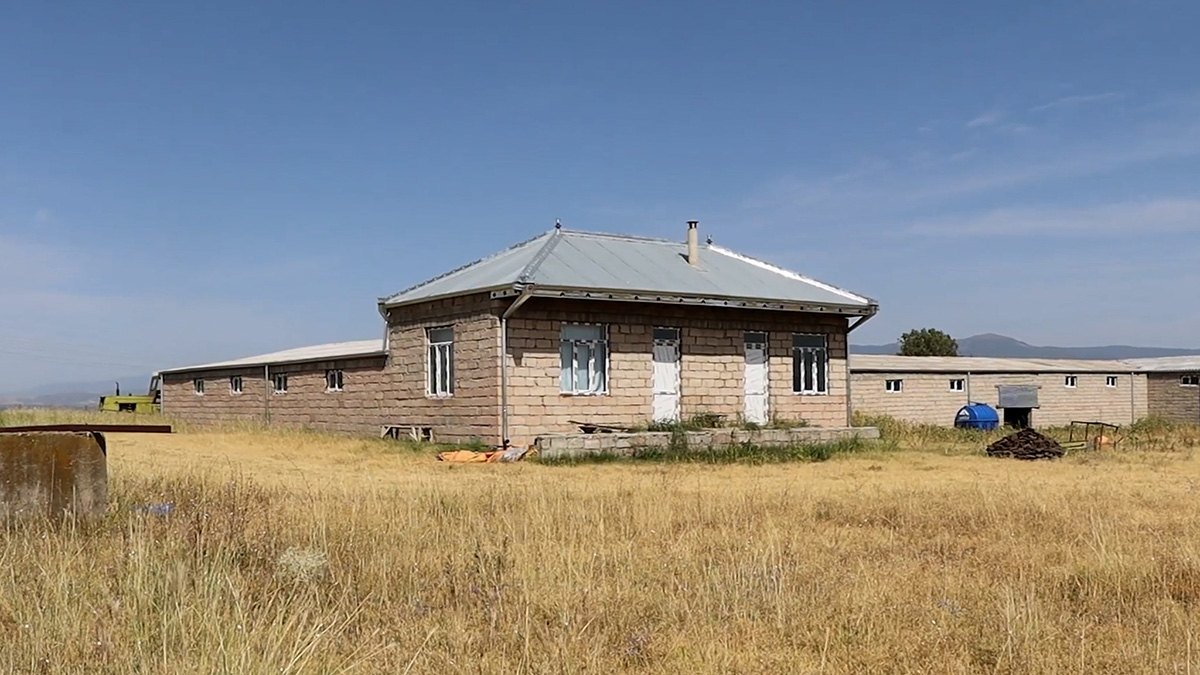 The Law of the Land

What happened in Duzagrama is a familiar story in many corners of the former Soviet Union, where the process of privatizing formerly state-owned lands has provided enormous opportunities for corruption and abuse.

Armenian Prime Minister Nikol Pashinyan has launched multiple criminal cases against officials who allegedly abused their positions to illegally acquire state land since he was elected in 2018. In Ukraine, the prime minister announced in 2020 that more than 5 million hectares of state land — an area larger than Slovakia — had been illegally privatized in corrupt schemes. And in Georgia, the Orthodox church has been implicated in taking over land that was being cultivated by a Muslim community.

Georgia started reforming its land ownership system in 2007, the same year Ismailov was appointed to his position as the municipality’s representative in Duzagrama — effectively the head of local administration for the village. He has served in the position almost uninterrupted since then, building a stately home for himself in the village that dwarfs the surrounding houses. 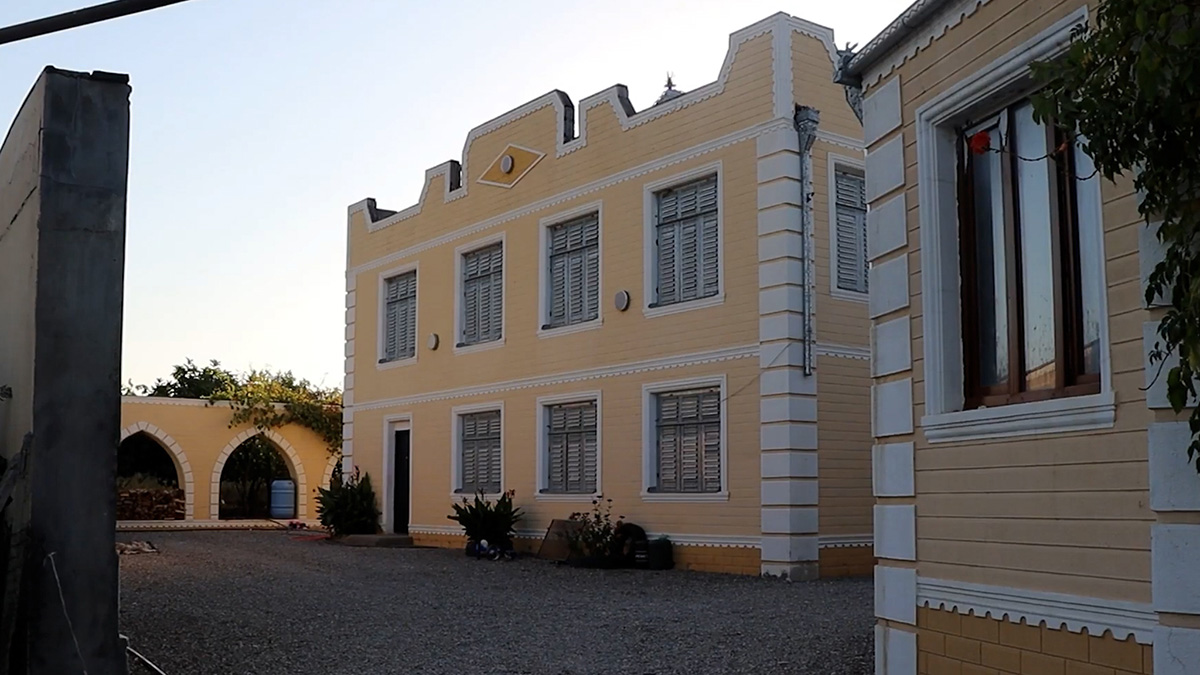 Locals have long complained that Ismailov has captured tracts of public land around the village for his own use, even taking to the streets to protest in 2016.

"The representative of the mayor in the village, Mukhtar [Ismailov] … registered several thousand square meters of land in other people’s names, as if those people have been the owners of the lands for years,” one protester, Elvin Sultanov, told Georgian state TV at the time.

iFact’s investigation found Ismailov’s scheme accelerated after Georgia brought in a new law in 2019 that transferred the responsibility for investigating land claims to the land registry office and local administration. Lawyer Tamila Mildiani said the changes, which now meant officials like Ismailov could submit applications on behalf of farmers, opened the system up to abuse.

Since 2019, local officials in Georgia have been able to submit land claims on behalf of farmers in their area. Previously, the onus was on villagers to research and submit land claims themselves, which was often difficult for illiterate or poorly educated farmers. The change, in theory, was supposed to make it easier for these farmers to make claims, but it also gave more power to local officials to manipulate the process. The new system works as follows: a villager appeals to the registry office to privatize a parcel of land that they have been farming, paying only a nominal fee. The registry office searches the archives for documentation that would demonstrate the applicant’s use of the land. If the search proves fruitless, the municipality directs a query to its local representative, which in Duzagrama is Ismailov. The village representative then has to find two neighbors who will testify to the applicant’s use of the land. If this satisfies the municipality, it will issue a deed.

Today, Ismailov officially owns or leases roughly 30 hectares of land around Duzagrama in his own name or those of his family members, according to land registry documents. But multiple villagers said he unofficially leases a further 30 hectares through a proxy, which he uses to grow crops and raise cattle. Ismailov has also taken control of another 60 hectares, more than a dozen villagers say, by putting forward land claims on behalf of 31 other people, with or without their knowledge.

When shown a map of the properties, 65-year-old resident Gabil Aliyev confirmed that the 90 hectares in question were controlled by Ismailov. “He plows it himself, he sows it himself, and he rents out [some of it] to other people,” Aliyev told iFact.

In one case from last year, about two-thirds of a hectare of land within this 60-hectare area was registered in the name of local resident Tofik Guseinov, with Ismailov and his wife as witnesses to verify the claim. Land registry documents show the property was privatized based on their testimony, and certified by Ismailov. Villagers said this parcel of land was actually controlled by Ismailov, too. Reporters were unable to reach Guseinov for comment.

When approached by reporters, multiple villagers were shocked to learn they owned land. Khanlar Alaskarov, 69, said he was aware that Ismailov had “temporarily” registered a lot of land in his name, which the official was using himself. But Alaskarov was astonished to hear his signature also appeared as a witness on the privatization documents for three other parcels of land registered in other people’s names that Ismailov is now said to control.

“I didn't go see any land,” Alaskarov exclaimed. “I swear I don't know anything about it.”

One local woman, Rabayat Mamedova, said Ismailov had refused to allow her family to claim a plot of land that they were farming, registering it instead in the name of one of his proxies in 2020.

“My father was using two hectares of land, but Ismailov refused to provide the document needed for registering it,” said Mamedova. “I filed a complaint at the prosecutor’s office and I wrote to the parliament, but nobody has responded to my complaint for over two years.” 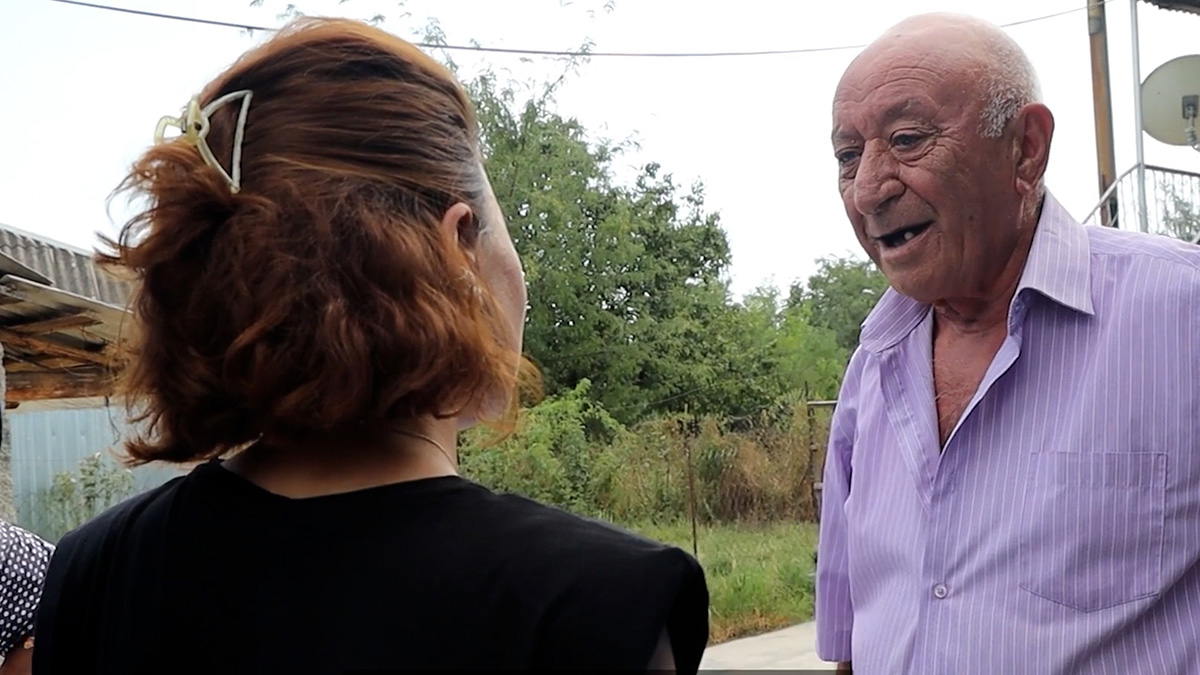 Mamed Huseynov is one of the proxies with whom Ismayoluv registered. When reporters asked to see the land, Huseynov admitted: “I forgot where it is.” (Photo: ifact.ge)

Other villagers supported Ismailov. More than a dozen people told reporters that Ismailov was farming 30 hectares of land that were leased in the name of Ayaz Mamedov (no relation to Rabayat Mamedova). One said she bought milk from Ismailov’s cattle there.

When reporters approached Mamedov, he denied that Ismailov was farming the land, saying bad people were trying to “slander” the official. But when reporters asked how much he paid to lease the land and other details about the plot, he was unable to answer.

Another local man, Mamed Huseynov, was adamant that he had been growing alfalfa on a small plot registered in his name for the past three to four years that others said was actually farmed by Ismailov. But when reporters asked to see the land, Huseynov admitted: “I forgot where it is.”