A U.S. court has asked Lebanon’s judiciary to serve legal papers against two top Lebanese politicians seeking to compel their response to accusations they orchestrated the kidnap and torture of a Lebanese-American couple. 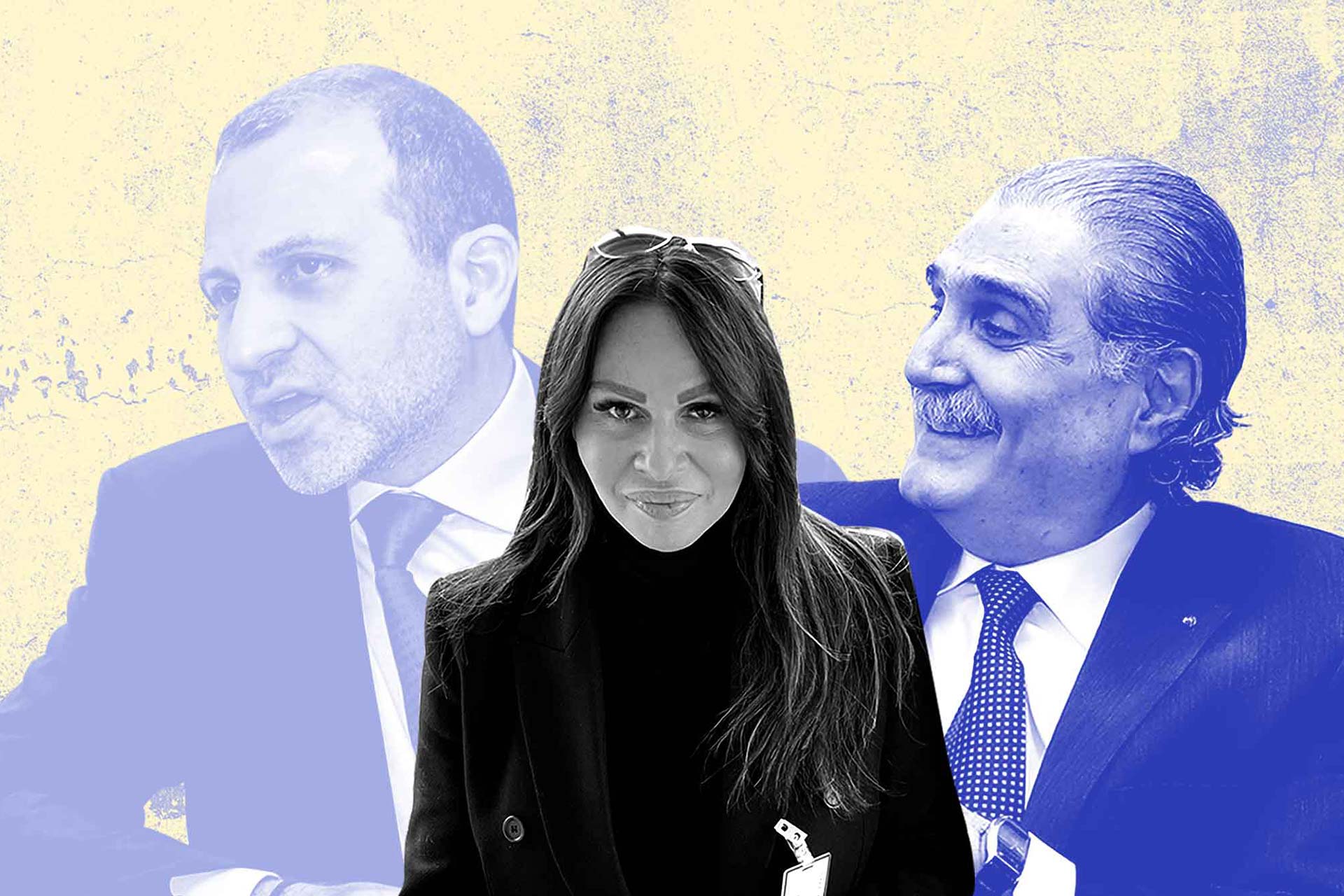 Elie Samaha, a U.S.-Lebanese citizen, and his wife Lara Samaha, who holds a U.S. green card, are suing the Lebanese politicians and eight others, including three family members, judges and lawyers in connection with a family dispute over land and money they claim was stolen from them.

The case has the potential to further expose the abuse of power in Lebanon and put the country back in the unwanted spotlight it had already been in after the deadly August 4, 2020 Beirut port blast that killed more than 200 people, injured over 7,000 and caused up to US$4.6 billion in material damage.

That probe has yet to hold anyone accountable – despite evidence to suggest that senior Lebanese politicians knew of the presence and risks posed by the ammonium nitrate in the harbor that caused the deadly explosion.

The case has placed the Lebanese judicial system under scrutiny, with Human Rights Watch alleging political interference and "serious due process violations," and calling for "an independent, international inquiry."

Now U.S. authorities are bringing up the Samaha case with the Lebanese government.

On May 17, U.S. Embassy representatives in Beirut handed over to Lebanon’s Foreign Ministry a copy of a supplemental civil complaint the Florida-based couple filed in 2020 against Gebran Bassil, Lebanon’s former foreign minister who is also the son-in-law of President Michel Aoun, and lawyer Salim Jreissati, a presidential advisor and former justice minister.

The Samaha’s judicial saga started in 2015, when the couple alleged in a lawsuit filed in Beirut that family members stole millions of dollars left for Lara in an inheritance. When their claim was still active but delayed, they filed a parallel lawsuit in the U.S. on Nov. 14, 2017 in efforts to recover the inheritance.

And that’s where they say their nightmare began.

As the litigation progressed, the couple visited Lebanon in 2019 hoping to settle the dispute but the meeting turned out to be “a trap to get me to dismiss both lawsuits,” Lara alleged.

She said she was imprisoned for 11 days and Elie for nine. For several days they were kept in an underground military prison and denied food and medication, she alleged. 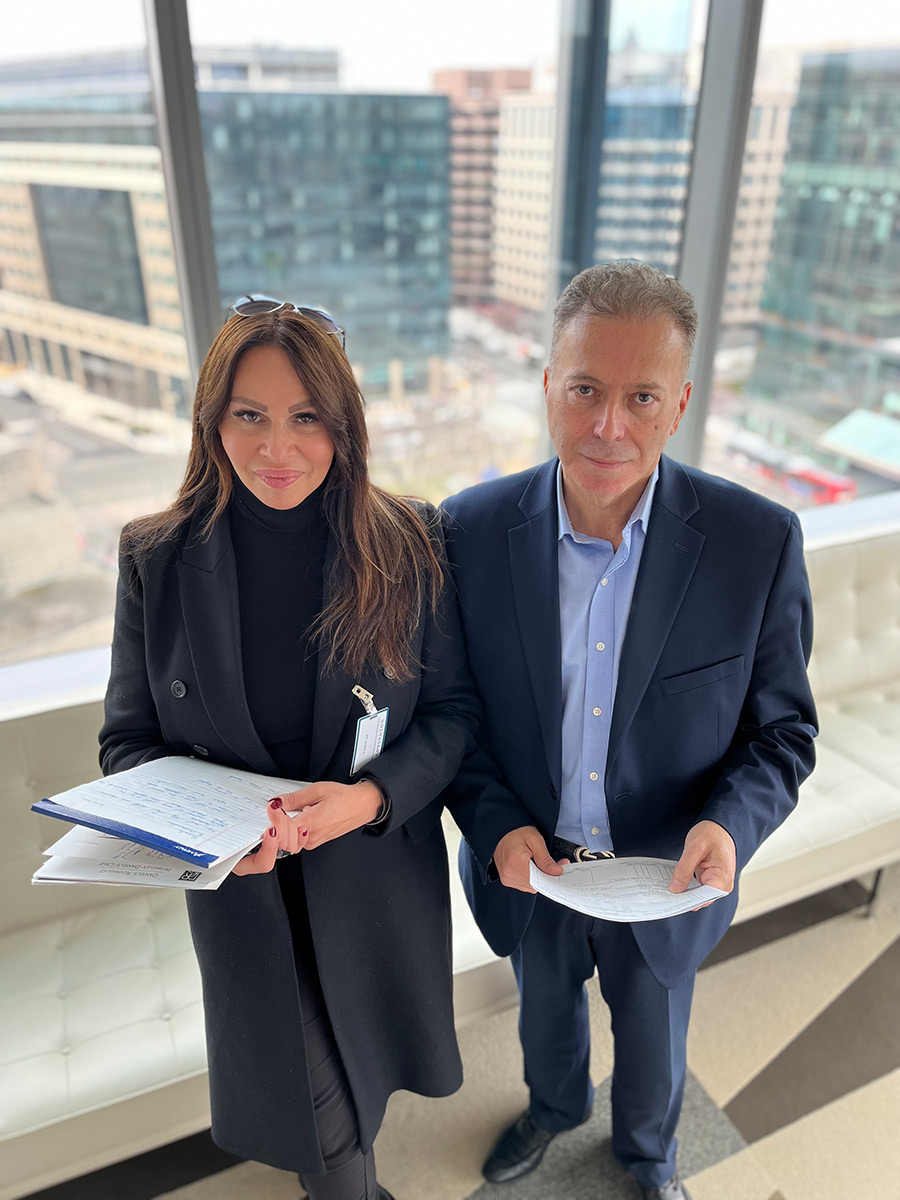 Those claims were vehemently denied by a senior Lebanese security officer, who spoke to OCCRP on condition of anonymity because it involved an ongoing legal matter.

To secure their release, the couple said they were forced to withdraw their U.S. and Lebanese lawsuits. Lara said her Beirut inheritance lawsuit was dismissed without her consent by her then Lebanese attorney Majed Aoun Bouez who signed on her behalf and is also now a defendant in the U.S. civil case.

Lara said Bouez was recommended to her by the wife of ex-foreign minister Gebran Bassil. Chantal Bassil is the daughter of President Aoun and a paternal relative of Lara. Bouez is a lawyer for Bassil’s FPM party and now represents Bassil in this case.

WhatsApp communications viewed by OCCRP reveal frantic communication between the couple’s U.S.-based attorney, Bouez, and U.S. embassy officials who closely monitored the couple’s release from detention and departure from Lebanon.

“We will dismiss the lawsuit once I know Lara is free and safe. I am suggesting that she be released and brought to the United States embassy. This way I know for sure she is safe,” Lorne Berkeley, the couple’s U.S. attorney at the time wrote to Bouez from Miami on April 3, 2019.

But as days passed, the couple remained in detention even after their attorney met Lebanese officials’ demands to dismiss the U.S. case.

“Why are they not released?” Berkeley insisted on April 9.

“Hello. Any updates??” he asked the following day after receiving no answer.

The Samahas eventually were released on April 11 after paying bail of three million Lebanese Liras, or about US$1,800.

Once back in Florida, the two filed their supplementary complaint, a copy of which was handed over to Lebanon’s Foreign Ministry last month.

Lawyers for the two Lebanese politicians rejected the allegations.

A senior Lebanese official with knowledge of the ongoing Samaha case in the United States warned it could trigger more individual U.S. sanctions and have long-lasting repercussions.

“What happened is a scandal to the Lebanese judicial system. It is worse than money laundering. If the court system is corrupt, then everything else is corrupt,” the official told OCCRP, speaking anonymously for fear of retribution. “I worry it could end up with the U.S. sanctioning some of the lawyers and judges for torture and violation of human rights.”

Bassil, who heads the Free Patriotic Movement (FPM), the powerful Christian party in Lebanon allied to the powerful Shiite movement, Hezbollah, is already under U.S. sanctions since November 2020 for playing a major role in corruption in Lebanon. 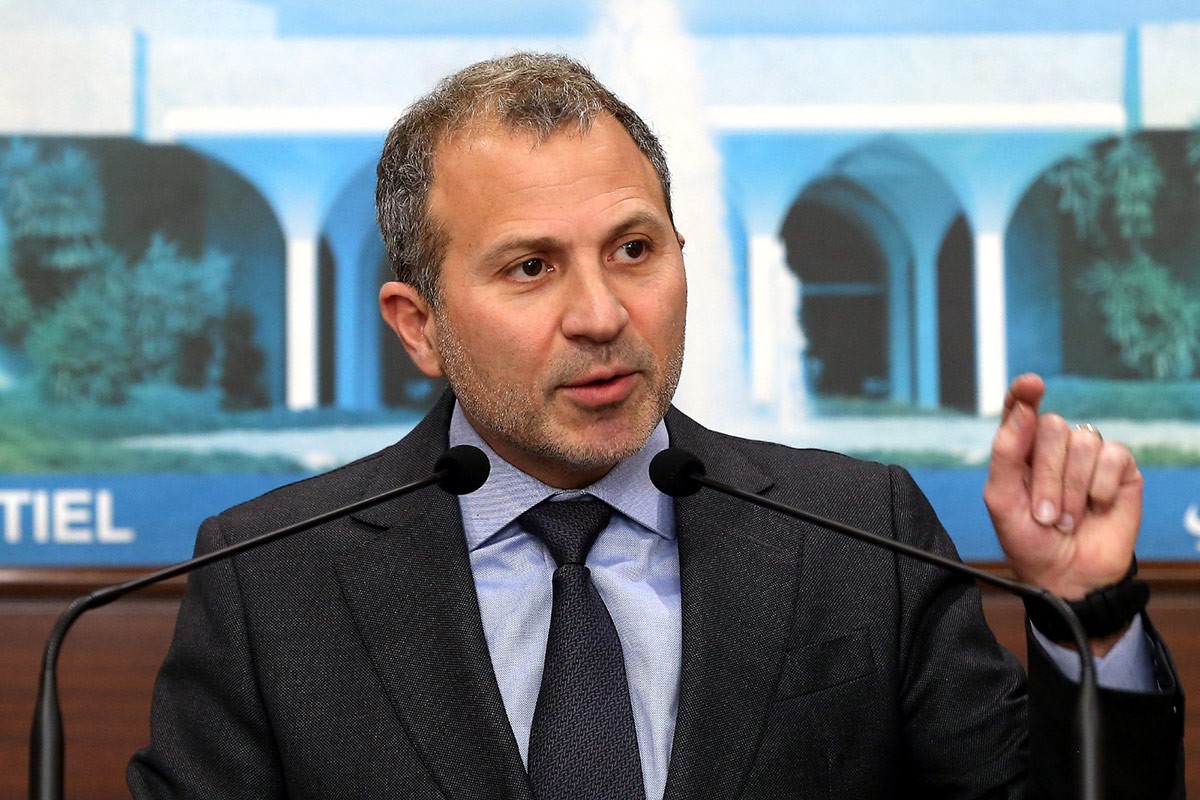 “In 2017, Bassil strengthened his political base by appointing friends to positions and purchasing other forms of influence within Lebanese political circles. In 2014, while Minister of Energy, Bassil was involved in approving several projects that would have steered Lebanese government funds to individuals close to him through a group of front companies,” said a U.S. Treasury announcement.

Jreissati is also a member of the FPM that was founded by President Aoun. He is not under any sanctions and has hired a Miami attorney to address the accusations.

“There is a potential defense that any claims that this plaintiff would have against Mr. Jreissati would need to be brought in Lebanon. And if Mr. Jreissati is properly served, we will obviously take a look at that,” said Michael Fasano, the Miami lawyer, who added that “we’re looking forward to defending Mr. Jreissati, whether it be on jurisdiction grounds or on the merits, because he denies that these allegations are true.” 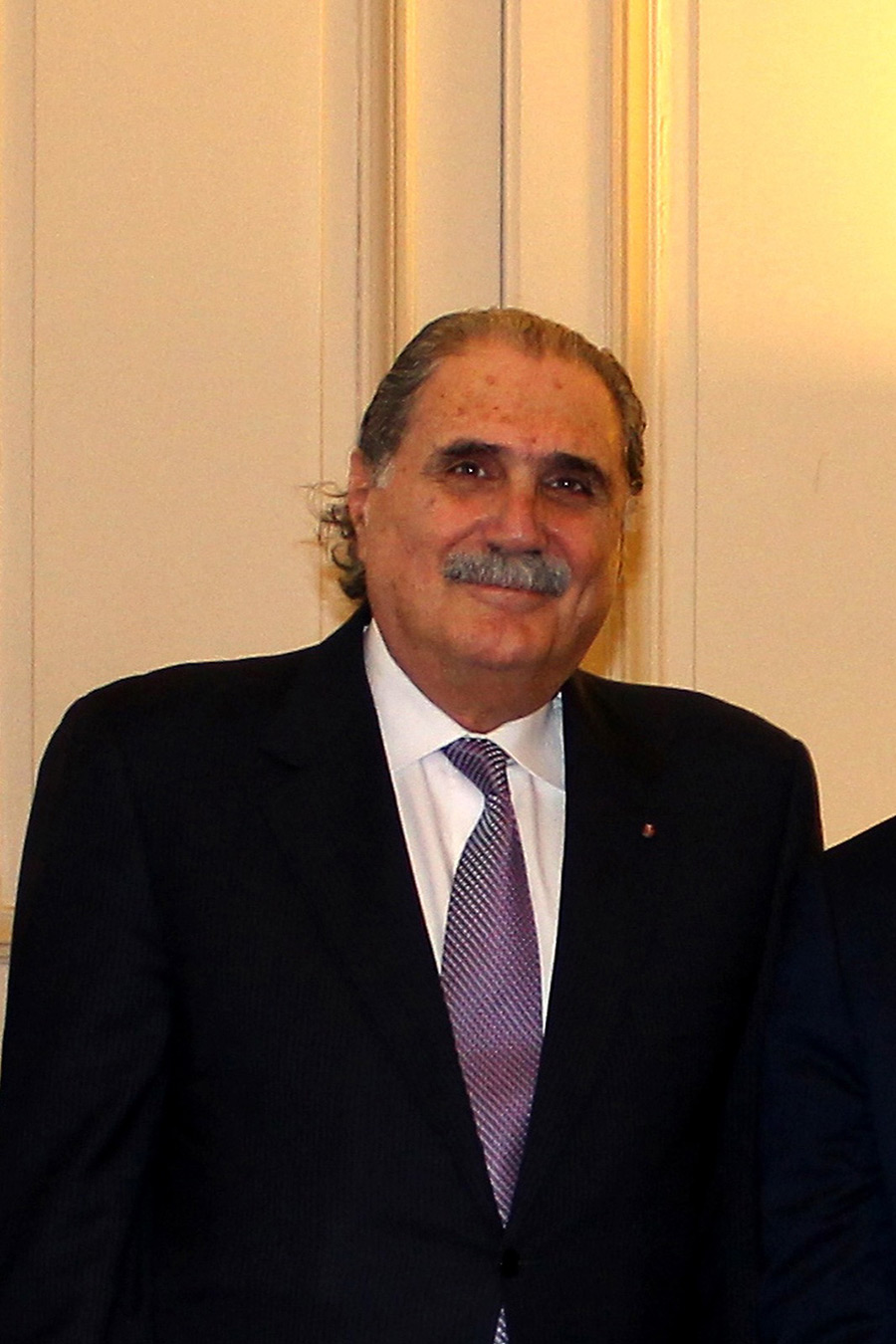 Within the next few months, Bassil and Jreissati must complete, sign, and return their affidavits so they can be filed with the U.S. court. After that, documents are no longer sent through diplomatic channels and the Lebanese politicians will interact directly with the Miami court.

The requests were made in what’s known in court vernacular as a rogatory letter, and failure to respond would put the two at risk because the U.S. federal judge could issue a default judgment in favor of the Samahas.

Speaking for Bassil, the Beirut-based lawyer Bouez told OCCRP that they had not yet received the U.S. court papers. “Once we are formally informed, we will take the appropriate stance,” he added.

Jreissati told Daraj.com, OCCRP’s Lebanese media partner, that “this is the destiny of the politician in Lebanon … to be subjected to smear campaigns. But the truth always shines, especially if the person works according to principles. The coming days will reveal many things,” Jreissati said.

Justice Minister Henry Khoury told Daraj.com that the U.S. request will be referred to the Higher Judicial Council because it is a civil case. The Council will refer it to a court where the defendants live. The process can take up to three months from the date the rogatory letter was received.

“Obviously if Mr. Jreissati is served with documents, we will take a look at them, we’ll make sure they are legally sufficient and if they are and if he is properly served through international channels he would have 21 days to file a responsive pleading,” Fasano said. “And that's what we would do. We look forward to defending Mr.Jreissati.”

The lawsuit in the Miami court names Lara’s paternal cousins with connection to President Aoun’s wife, other family members and the Lebanese officials who the Samahas allege were bribed to help in the theft of millions in inheritance money.

“Our fight to get justice in Lebanon and return what is rightfully mine led to sadness and heartbreak, as our endless efforts were constantly blocked by corrupt Lebanese judges and politicians,” the Samahas told OCCRP.

“They need to face justice in the U.S. courts. We are hopeful that our case will be a step towards imposing accountability and will lead to reforms that will remove corrupt politicians like Bassil from power,” the couple added.