Large fees to avoid military conscription have helped turn Syria’s diaspora into a major source of revenue for the cash-strapped government. Men who don’t pay face the threat of their family’s assets in Syria being seized. 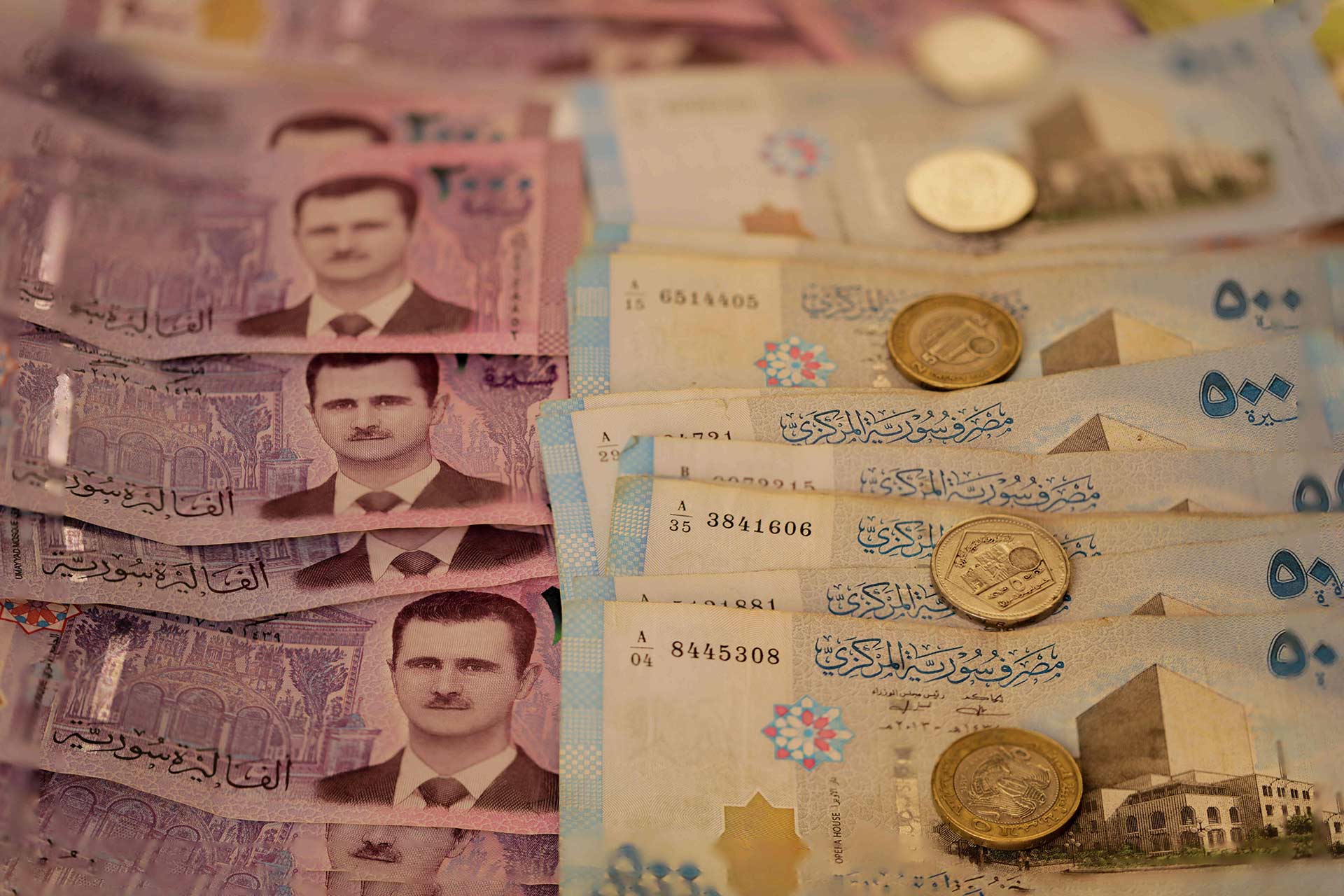 Early this year, Yousef, a 32-year-old Syrian living in Sweden, found himself faced with an impossible choice: Either enlist in the army of the government that made him a refugee, or risk his family losing their home back in Syria.

Military service is mandatory for Syrian men between the ages of 18 and 42, and the stakes rose significantly in February when an army official announced on Facebook that a new regulation would allow authorities to confiscate the property of “service evaders” and their families. Pressure was mounting on Yousef to decide.

And so, in June, he made his way to the Syrian Embassy in Stockholm with $8,000 in cash, ready to pay the fee to have his name taken off the conscription rolls. A shiver ran down his spine as he collected his receipt.

“This money will be used by the Syrian regime to buy weapons and kill more people,” Yousef told OCCRP, his voice trembling.

He is far from alone. About a fifth of Syria’s population of 17 million are men of military age, according to data from the World Bank. With some 6.6 million Syrians having fled abroad since the protest movement of early 2011 slipped into civil war, there are likely to be hundreds of thousands in Yousef’s position.

Studies have shown that the threat of being conscripted is a major reason many refugees fear returning to Syria.

The Syrian government has been able to leverage this anxiety into revenue, harvesting foreign currency from the roughly 1 million Syrians who have settled in Europe to help prop up their ailing budget after U.S. sanctions cut them off from the international banking system last year.

Syrian embassies, which used to only process paperwork for the military exemptions, have recently begun collecting cash payments. Two researchers, an airport official, and a former diplomat interviewed by OCCRP and the Syrian Investigative Reporting Unit (SIRAJ), said they suspected the cash makes its way back to Syria via diplomatic pouch.

Although it is difficult to determine exactly how many Syrians have paid the military exemption fees, government documents and official statements show that Bashar Al-Assad’s government projected that the policy would raise substantial income.

The findings speak to the lengths the Syrian government is going to in order to raise cash, and raise questions about when exactly sovereign relations between a government and citizens slip into a form of extortion. 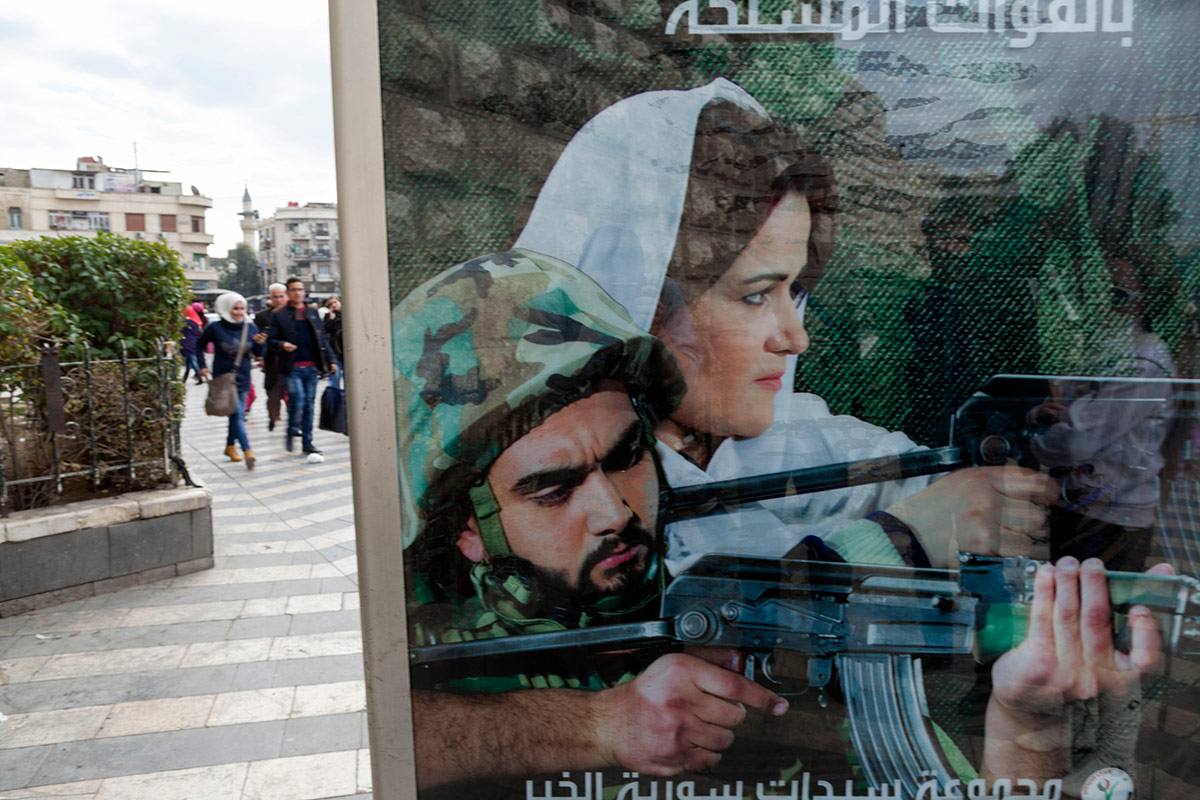 Billboard for the Syrian army on the streets of Damascus. (Credit: Goran Šafarek / Alamy Stock Photo)

In June last year, the U.S. implemented the Caesar Act, a tough set of sanctions named for a defected Syrian officer who had leaked tens of thousands of photos of torture victims in Syrian prisons six years earlier.

The sanctions worsened an already difficult financial situation for Syria, cutting off its access to the international banking system. Processing payments for vital imports such as wheat and oil products became even harder, and the Syrian pound — now worth barely one percent of its pre-crisis value against the dollar — suffered further losses.

“Shortage in foreign currency has become an acute problem, especially after the Caesar Act came into force," Armenak Tokmajyan, a researcher at the Carnegie Middle East Center in Beirut, told OCCRP. “The regime needs foreign currency. The more it has, the longer it will survive.”

Under pressure, the government has leaned increasingly on its diaspora to fill its coffers since the crisis broke out. A Syrian passport, for instance, is one of the world’s most expensive to obtain abroad, at $300 for a new passport and $800 to get it expedited.

The military exemption fees are even more substantial.

Conscription has long been difficult to escape in Syria, where the constitution enshrines military service as a “sacred duty.”

Two recent amendments to Syria’s conscription law laid the groundwork for the situation now confronting Yousef and many others. The first, passed in August 2014, raised the exemption fee from $4,000 to $8,000. The second, in December 2019, allowed the government to seize assets without prior warning from people who reached the age of 42 and had not yet performed their service or received an exemption.

Early this year, the head of the military’s Allowance and Exemption Branch, Brigadier General Elias Al-Bitar, stoked the fears of many potential recruits when he announced on Facebook that the new amendment was going into effect.

It’s unclear to what extent the new conscription law amendment has been used to seize assets in Syria. But there was already precedent in the infamous “Law No. 10” of 2018, which effectively allowed authorities to seize property without due process, and the earlier “Decree 66,” which has been used to expel residents of previously opposition-held areas.

Sara Kayyali, a researcher at Human Rights Watch, told OCCRP that the organization had received "fairly credible reports" from people whose assets had been placed on lists to be frozen by the finance ministry.

Although the lists did not say exactly why the assets would be frozen, "it did happen after Caesar was implemented, so we estimate that these cases are a result of assets freezing for people evading military conscription," Kayyali said.

There are also signs the government expected the conscription amendment to bring in new revenues.

A parliamentary study from 2015 — the year after Syria raised the fee — predicted that payments to avoid service could bring in over $1.2 billion a year, even if only 10 to 15 percent of Syrians wanted for conscription actually paid up, Mujeeb Al-Rahman Al-Dandan, a Syrian member of parliament, told local radio in an interview in November last year.

The study has not been made public. But according to Dandan, it found that annual revenues from the fee could rise to between $2 to $3 billion within five years, meaning it would be a “good contributor to the treasury” and could even “help raise the wages of public servants, including military personnel.”

Syria’s 2021 budget projection predicts revenues from the military exemption fees to reach 240 billion Syrian pounds — about $190 million at the official exchange rate — up from 70 billion pounds in 2020, according to copies published in Syria’s Official Gazette.

The estimated revenue makes up 3.2 percent of this year’s budget revenue, up from 1.75 percent in 2020, Syrian economist Karam Shaar told OCCRP.

The government has also made a point of pursuing draft dodgers. In January 2019, the defense ministry issued lists of more than a quarter of a million people wanted for reserve recruitment and circulated them to recruitment offices around the country. 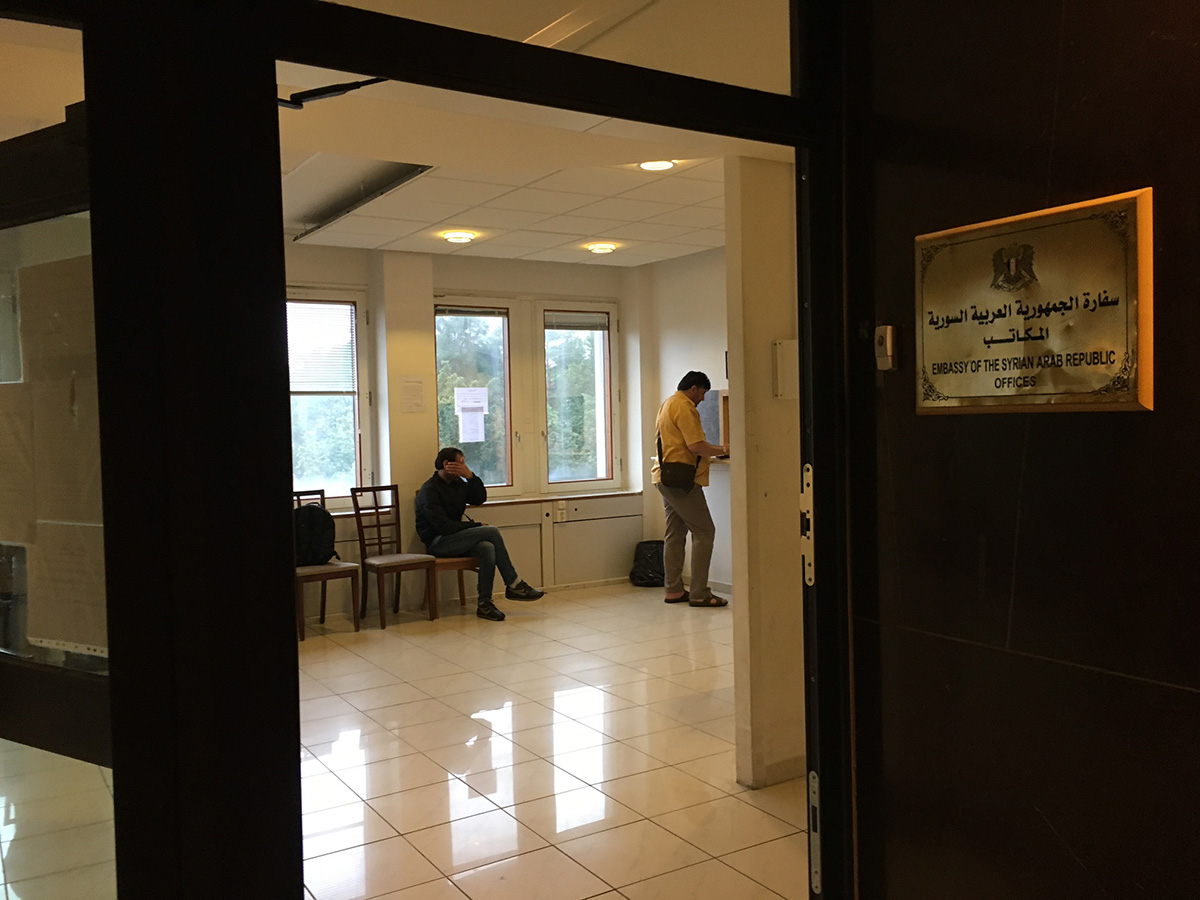 Inside the Syrian Embassy in Stockholm. (Credit: Ali Al Ibrahim)

Sweden illustrates how the new amendments have played out among Syria’s diaspora. The Scandinavian country hosts about 114,000 of the roughly 1 million Syrian refugees in Europe and is home to tens of thousands of relatively new arrivals as well as second- and third-generation Syrians.

Between June and August this year, OCCRP reporters made three visits to the Syrian Embassy in Stockholm. They counted an average of 10 applicants a day waiting in the embassy’s queue for military service exemption.

Another hint of how many people were paying the exemption fees came a year earlier, in June 2020, when the embassy website published the names of 43 Syrians cleared to pay the fee. It is unclear exactly when those on the list applied, but for other procedures, such as passport issuance, the embassy usually issues its lists once per month.

The June post was the last such public announcement.

An embassy employee — speaking to an undercover OCCRP reporter who did not identify himself — said he could not say exactly how many had applied for the service exemption, but that there had been a "significant increase" in the first half of 2021, which he attributed to Bitar’s statement.

Even before the Caesar Act, the European Union and the United States had broadened sanctions to include Syria’s central bank. This made it almost impossible for Syrian embassies in European countries to send funds to Syria electronically, as local commercial banks refused to carry out the transactions.

A sign posted at the entrance of the embassy in Stockholm in June 2020 hinted at the difficulties, saying payments needed to be in cash after the Swedish electronic payment processor Bambora had stopped working with the mission.

Susanne Stöger, a spokesperson for Bambora, told OCCRP that the payment service had terminated its contract with the embassy on instructions from MasterCard — one of the credit card brands whose payments they process — given prohibitions on dealing with the Syrian government. Wordline, the payment services company that owns Bambora, had also flagged Syria as an “unacceptable” risk, she said.

Two researchers, an airport official, and a former diplomat said they suspected that the embassies were using diplomatic pouches to get around these restrictions.

Ayman Abdel Nour, a Washington, D.C.-based researcher and director of an opposition media outlet, told OCCRP that the Caesar Act had forced the Syrian government to adapt, listing diplomatic pouches as one of the possibilities. “The more money the regime gets, the longer it stays in power," he said.

Bassam Al-Emadi, who served as Syria’s ambassador to Sweden between 2004 and 2008 and then defected in 2011 and now lives in Spain, also said he suspected that the embassies were using diplomatic pouches to send cash back to Syria.

If true, the move would violate the 1961 Vienna Convention on Diplomatic Relations, which regulates the work of diplomatic missions, he said. The convention says that “packages constituting the diplomatic bag must bear visible external marks of their character and may contain only diplomatic documents or articles intended for official use.”

“Diplomatic immunity does not cover sending money inside the diplomatic bag,” Emadi said. 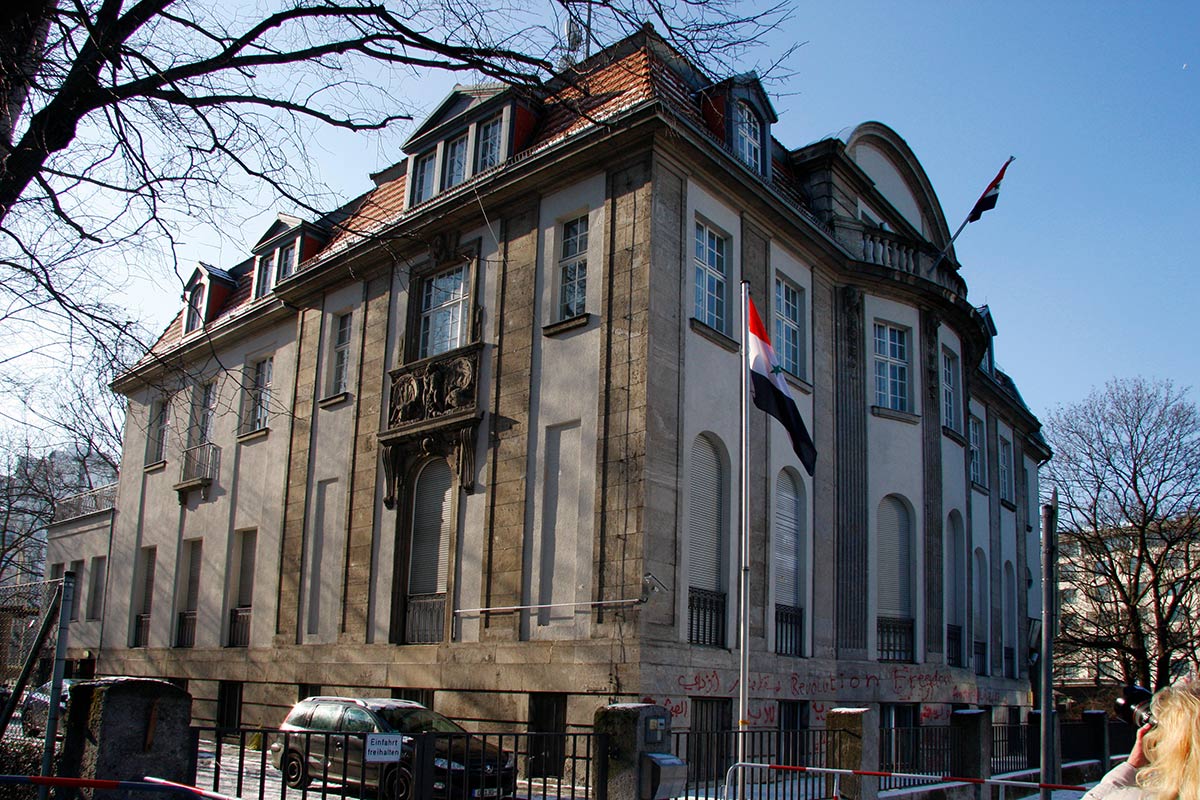 The Syrian Embassy in Berlin. (Credit: 360b / Alamy Stock Photo)

OCCRP spoke with ten Syrians — eight in Sweden, one in Germany, and one in Lebanon — who decided to pay the conscription fee. Some, like Yousef, were frightened by the prospect of asset seizures in Syria. Others had more practical reasons.

One 29-year-old named Ali said he paid the fee at the encouragement of his family, who considered the payment to be “a form of direct participation in the Syrian war effort.”

Gian, a Syrian who works at a home for the elderly in Frankfurt, Germany, said he had no issue in paying the money.

“I am getting a monthly salary, the exemption process is easy, and I want to safeguard my family’s property in Syria from being seized,” Gian said. He said three relatives with asylum status in Germany also paid the fee.

But many Syrians are still leery of funding the government they feel was responsible for sending them into exile.

Abdullah Jaafar, a 35-year-old Syrian who has been living in Gothenburg, Sweden's second-largest city, for eight years, said he sees the exemption payments as a kind of extortion.

"I have the full amount, and I can pay it, but I will not do it," Jaafar said. "This government is illegal."