After 13 years together, the death of her dog left a gaping hole in Laura’s life, and she didn’t want another. But she changed her mind after speaking with friends, and early last year she arrived in the city center of Hamburg, Germany, to collect her new puppy. 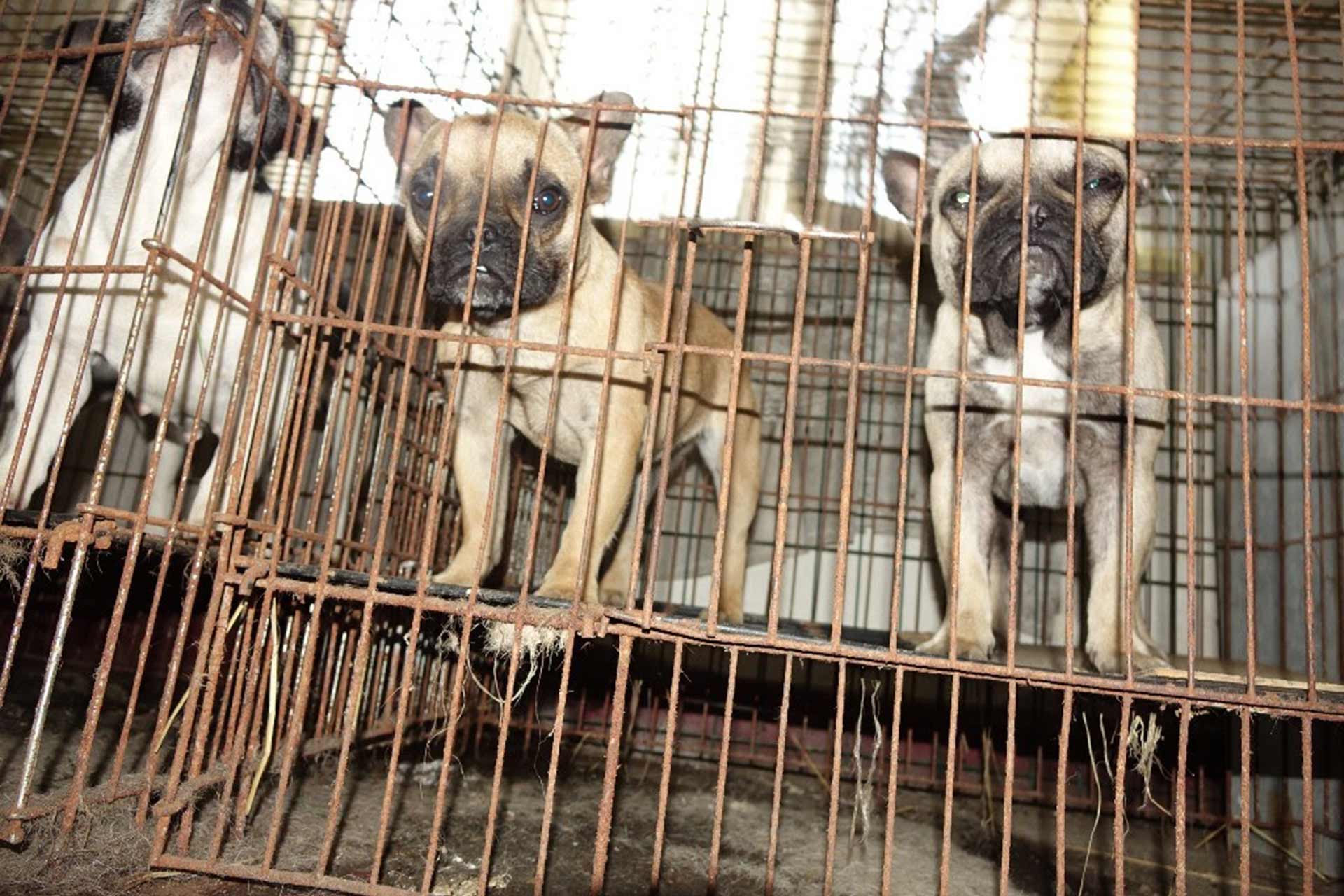 Her mother had found Chico, a cute spitz, advertised for sale on eBay marketplace. Laura picked him because the ad said he was the only one of his siblings without a family.

When she and her mother arrived at the designated address, they found a run-down flat stinking of urine. They didn’t think much of it — after all, it was the home of a breeder who had small puppies. Chico was dirty, but he was also excited and affectionate. The breeder assured them that the puppy was both vaccinated and dewormed. But when Laura paid the 500 euros, she received neither a vaccination certificate nor an invoice.

“In retrospect, I can’t say why we didn't ask for it,” she told the OCCRP. “Unfortunately, I only wanted to see the good here.”

A day later, Chico was dead. A late-stage parvovirus in his bloodstream meant that a vet had to put him down.

The crimes it encompasses are numerous and complex, including smuggling, tax evasion, market fraud, consumer fraud, animal abuse, and danger to individual and public health.

Those who carry it out range from irresponsible local hobby breeders who don’t declare taxes after selling designer breeds to transnational organized criminal groups who coordinate multiple simultaneous shipments of drugs, humans, and dogs to outmaneuver and overwhelm customs services.

Yet though the illegal trade is large and growing, having been turbocharged by the growth in e-commerce, its volume and financial value remain unknown. It must, however, run into the hundreds of millions of euros.

After all, the U.K., Swiss and EU online dog trade - both legal and illegal- is conservatively valued at 1 to 1.5 billion euros ($1.2-1.8 billion), with some estimates rising to 4 billion euros ($4.8 billion). Some activists believe up to 90 percent of online ads on eBay, a primary dog trade site, are from illegal breeders, says Iwona Mertin, Companion Animals Programme Leader at the NGO Eurogroup for Animals.

“The available estimates indicate that Europe’s pet trade (cats, dogs, exotic) is the third most profitable illegal trade in the EU, after narcotics and weapons,” she told the OCCRP.

It is an illicit economy that trots down the street every day, sits in living rooms of unsuspecting owners and cuddles up to them.

The volumes are staggering: some eight million new dogs are required annually to supply the European market, but only about 1.1 million are produced by official breeding facilities. A smaller portion are adopted from rescue shelters or acquired from acquaintances, but that still leaves a vast, secretive supply chain that supplies millions of dogs every year.

Not all of that trade represents outright criminal activity – there are many small-scale breeders or sellers who earn a good living in the unregulated trade without breaking any major laws. But there is evidence that those small-time actors are losing ground to criminal syndicates, says Jennifer Maher, Senior Lecturer in Criminology at the University of South Wales.

“I think given the nature of the trade, it’s increasingly going to be practiced by organized crime groups, [though] we can’t say how many,” she told the OCCRP. 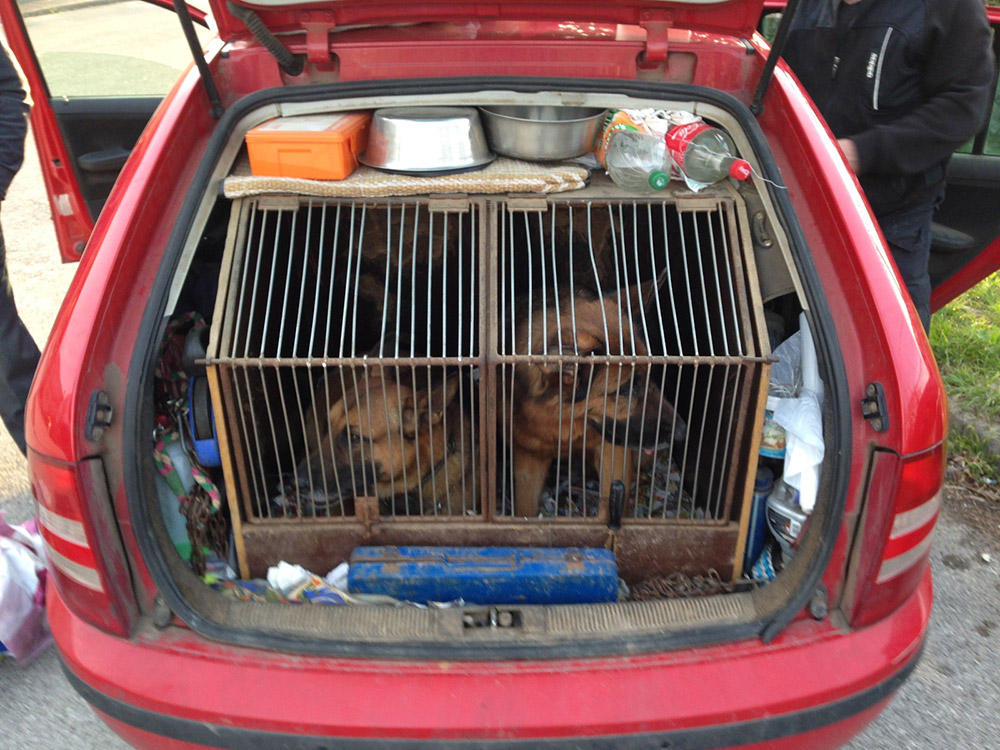 Among Europe’s criminals, puppies are like a new drug: a lucrative commodity that can be either domestically produced or trafficked from cheaper countries, enjoys widespread and constant demand, and generates huge sums of money.

Vast “puppy farms” in eastern Europe produce the designer breeds that are in high demand in the rest of the continent. Puppy dealers then illegally traffic the often weeks-old dogs across borders in cars and vans, either in tiny cages or stuffed in fake wall panels or under floorboards.

The sales take place primarily on the internet, and the hand-offs are made in cars parks, highway service stations, and rented houses. The markup value can be no less staggering as that in the drug trade: a Hungarian puppy farm can create a French bulldog for 20-40 euros that, in one month’s time, will sell to a British buyer for 5,000-8,000 euros ($6,000-9,600).

In fact, dogs are much more attractive than drugs when one considers the low risks, says Joanna Randall, International Head of Companion Animals Campaigns at the NGO Four Paws.

As a result, several established organized criminal outfits have already diversified by entering the trade. Only last year, Irish drug gangs were reported to be investing in dog breeding both as an independent business and as a way of laundering drug profits, while two British crime syndicates have apparently given up drugs for the illegal dog trade. One article even claims there were 100 dog-smuggling gangs in the U.K. alone as of 2017.

“The big puppy dealers are making between $30,000 and $40,000 a week,” said veterinarian David Martin, of Brownlow Veterinary Group.

“[They’ve] given up drug dealing and cigarette importing because there’s as much money in [puppy dealing] and considerably less risk,” he said. 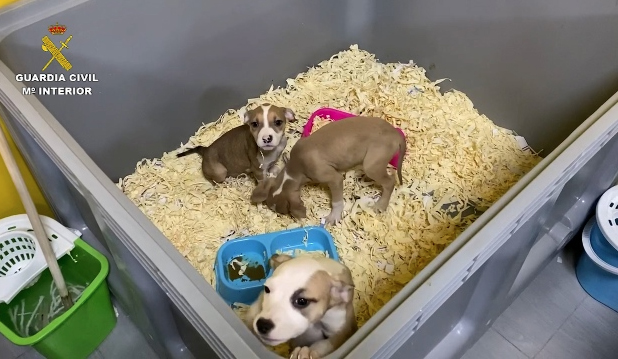 Nor is the phenomenon restricted to anglophone Europe. In Italy, traditional mafias like the Sicilian Cosa Nostra, the Neapolitan Camorra, and the Calabrian ‘Ndrangheta have long histories of doing business with animals, including horse breeding, cattle theft, and dog fighting. Expanding into puppy trafficking is an easy stretch, and one some mafia clans are apparently taking. Italian authorities call them the “Zoo-Mafia.”

“The rule [in organized crime] is always the same: follow the money,” said Dr. Paolo Zucca, Lead Partner at the EU-funded Bio-Crime Project.

“Many times, the same traders are transporting drugs, animals, people,” he told the OCCRP.

Like the drug trade, the illegal puppy trade tends to be horizontally structured, he said, with breeders, dealers, transporters, owners of consolidation points, and retailers operating in diffused networks, in which each person only knows their own limited role.

“There are the big fish and lots of other small fish. Sometimes you stop people, and they don’t [even] know what [they’re transporting], they’ve just been paid to drive the car from one country to the other,” Dr. Zucca explained.

“But at the end of the story there is a huge transnational crime organization in the background,” he added.

Just like in the drug trade, however, organizing vertically allows some actors to cut out various middlemen, Dr. Jennifer Maher said.

“They used to set up fake houses … but now they’re getting leaner and leaner. At every point they’re reducing the cost of their business and increasing the profits.”

“You see an advertisement, you click on the advertisement, you get in touch with the person, you say I want that puppy, [and] then in less than 72 hours it can make its way from eastern Europe to the U.K., which means they have no costs of accommodating the puppy, they’ll meet people on motorways to hand the puppy over, so it’s literally been in the U.K. for a couple of hours before it’s in the consumer’s hands,” Maher said.

That speed comes with serious moral and health concerns: most of these puppies are too young to be vaccinated, and being separated from their mothers can cause deep distress. As a result, dealers sedate them and pump them full of antibiotics for the journey, Dr. Zucca said.

Many perish anyway, with one report estimating almost 20 percent of puppies bought on the internet die before they’re six months old. Another estimates that 12 percent develop costly long-term health problems. They also come with serious diseases, such as parvovirus, distemper, or even rabies, that can infect humans or other pets.

As a result, besides the emotional pain of losing a new friend, a “cheap” puppy can end up costing ten times more in veterinary fees than a legally traded dog, Dr. Zucca said.

Raised in horrific conditions, many of the illegally traded pets also exhibit antisocial behavior, which leads some owners to abandon them after a few months. Others are stolen. These animals then become fodder for another big part of the illegal dog trade: theft and fraud. 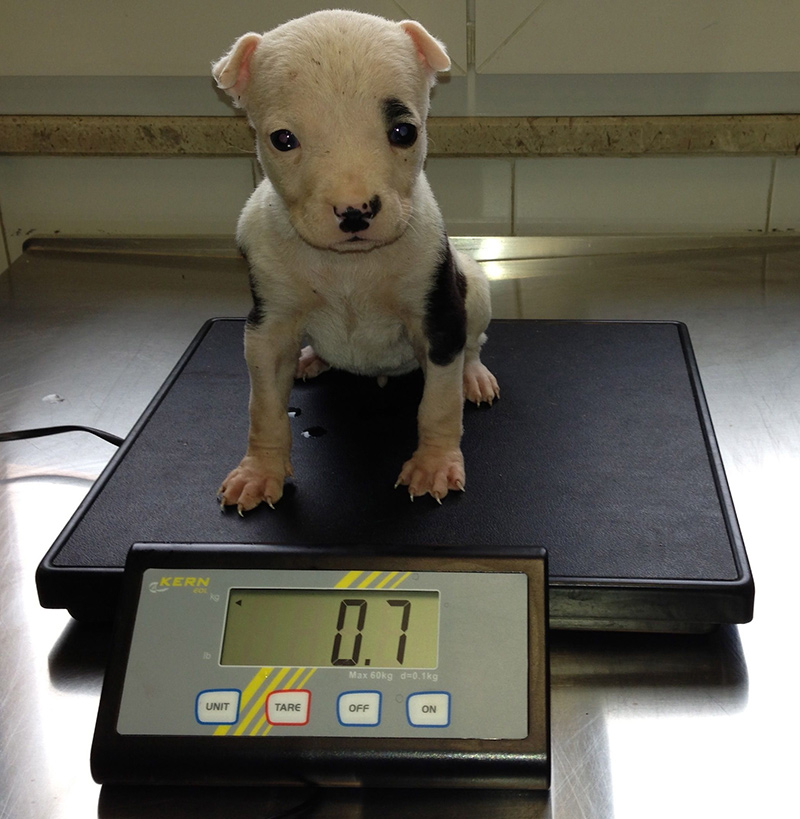 The coronavirus pandemic has massively contributed to the illegal trade. With many feeling lonely and trapped at home, the demand for pets has skyrocketed across Europe. But since the legal supply has not been able to meet that demand, prices have surged.

That has led to a dramatic increase not just of illegal breeding and trafficking, but also of theft: the BBC warned in December of U.K. organized crime groups bringing an “epidemic” of dog-snatching to unprecedented proportions. Even before the pandemic, dog stealing has recently become increasingly organized, with burglars breaking into pet shelters and homes just to take dogs.

Some are re-sold as pets to new owners; female dogs are pumped full of imported fertility hormones and turned into domestic breeding machines. But others are funnelled into a giant scam factory, says Dr. Zucca, in which criminals set up fake animal rescue centers and fundraise online for donations to help these “rescued animals.”

“Adult dogs with no value on the market. What is the value? The value is that if I have 40 stolen dogs, I ask you for 100-200 euros as a [donation] because I am a poor NGO [engaged in animal welfare]. I am not: I am simply bringing animals from everywhere I can catch them and selling [them],” he reveals.

What if dogs die? Not a problem, said Ina Mihaylova, Press Officer at EUROPOL.

“The organization [just] sends pictures and videos to the donor, while in reality the pet is frequently dead and even kept frozen in case the donor travels to the hosting country to visit it. In this case, the fraudsters say that the animal just died,” she said. In some cases, she said, monthly fees are received for years before the fraud is detected.

In sum, the criminality involved in the illegal dog trade is diverse and cruel. A dark commerce enmeshed in untold illegality, its harms cascade down through Europe’s societies and markets. The good news is that the solutions for tackling it are plentiful.

Stricter penalties for puppy traffickers may be the most obvious step, particularly when linked to policies that recognize the trade’s links to organized crime. The recently-released “EU Strategy to tackle Organised Crime 2021-2025” takes a step in this direction, stating that “companion animals continue to be traded illegally, often on a large scale and sometimes with potential devastating consequences.”

Given the transnational nature of the trade, judicial, law enforcement and even tax authority cross-border collaboration are also important, a factor the EU Strategy acknowledges as well. One pioneering example of this is the Biocrime Project on the Italian-Austrian border, which targets illegal pet trafficking.

The European Parliament has likewise shown signs of recognizing the scale of the problem, adopting a resolution in February 2020 intended to tackle the illegal pet trade. In addition, on April 21, the EU Animal Health Law will take effect, requiring all dog breeders to register with relevant national authorities. The EU’s Digital Services Act is likewise being encouraged to put more press on online platforms to regulate themselves.

Joanna Randall of the NGO Four Paws is adamant about this last point: online marketplaces cannot be allowed to continue shifting the burden of responsibility onto consumers. Facebook, Ebay, Gumtree: the e-commerce giants must step up and create a transparent system. Otherwise, more drug traffickers may consider branching from the cocaine to the canines.