Greek police arrested four U.K. nationals believed to have been involved in the smuggling of more than US$50 million worth of narcotics that were concealed in banana shipments. 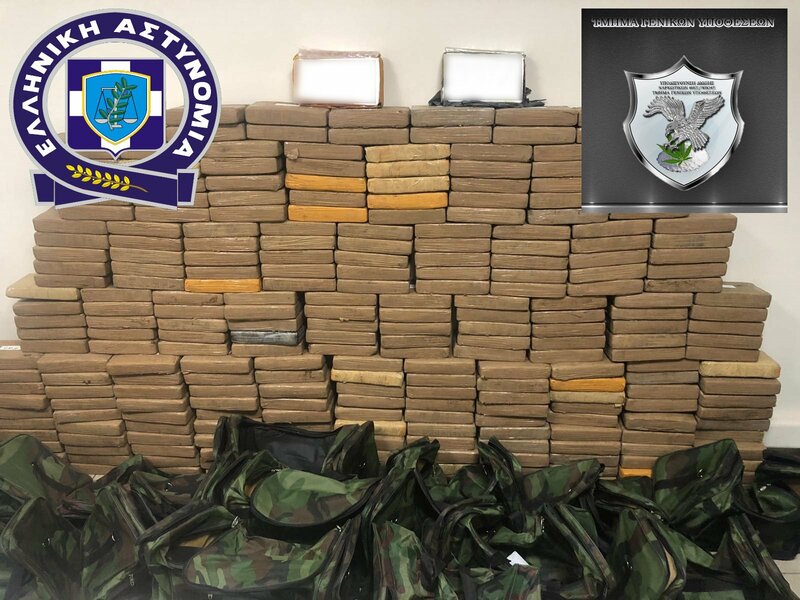 Nearly 300 kilos of cocaine was concealed in banana shipment. (Photo: Greek Ministry of Citizen Protection)The four suspects, two of whom are alleged leaders of an international drug trafficking ring, were detained in a residence near Thessaloniki, the Greek police said in a statement. The fifth member of the gang remains at large.

The arrests came after about 300 kilograms of cocaine were intercepted in Italy last month during an operation conducted by Italian customs authorities and the U.S. Drug Enforcement Administration (DEA) to disrupt a worldwide drug trafficking network.

The cocaine was hidden within regular banana shipments from a Latin American country to Australia and several European countries and was later found in the gang’s apartment in Thessaloniki, along with a gun, considerable quantities of money, and communication gadgets.

Police said they believed that the gang would had profited more than $10.41 million from the shipment that was divided into 260 packages.

The group is also suspected of being engaged in a similar effort to transport more than 650 kilograms of cocaine hidden in 23 crates of bananas aboard a ship discovered by Italian officials in April.

Some 840 kilograms of cocaine hidden in boxes of bananas, with a black market value estimated at $84.21 million, was also discovered in the Czech Republic. In this case the drug was accidentally delivered to supermarkets in several Czech cities.

The police did not reveal more details about the case, but it said that the country’s anti-narcotics authority (Národní protidrogová centrála) will further investigate the case with the support of international police and judicial institutions.