The US Tightens Sanctions Against Putin and Russia’s Elites

A U.S. court has authorized law enforcement to seize two planes belonging to sanctioned Russian oligarch Roman Abramovich, the U.S. Department of Justice (DOJ) said in a statement on Monday. However, none of the aircraft are currently in the country. 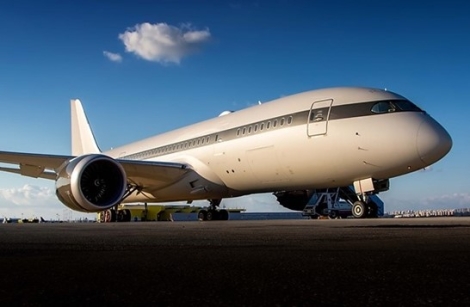 Roman Abramovich's Boeing, believed to worth some $350 million, is in the UAE. (Photo: The U.S. Department of Justice, License)“The United States of America has been authorized to seize a Boeing 787-8 aircraft and a Gulfstream G650ER aircraft owned and controlled by Russian oligarch Roman Abramovich,”  read the statement. The authorization is based on “probable cause of violations of the Export Control Reform Act (ECRA) and the recent sanctions issued against Russia,” it said.

Both the Boeing and the Gulfstream were re-exported to Russia, meaning that they flew from a foreign nation back to Russia, in contravention of the ECRA and the current sanctions against Russia, according to the seizure warrant and the unsealed affidavit.

According to the DOJ, Abramovich owns and controls both jets – the Boeing valued at US$350 million and the Gulfstream at $60 million – through a succession of shell corporations in Cyprus, Jersey, and the British Virgin Islands.

U.S. authorities also took steps last week to further weaken major networks Russia’s elites are believed to be using to hide and move money around and use luxury assets anonymously all over the world.

“Russia’s elites, up to and including President Putin, rely on complex support networks to hide, move, and maintain their wealth and luxury assets,” Under Secretary of the Treasury for Terrorism and Financial Intelligence, Brian Nelson, said, in a statement.

The latest U.S. sanctions hit Putin's office staff, government members, but also luxury assets, such as the President’s yachts, or vessels and planes of the already sanctioned Russians, blocking all of their property and interests in property in the U.S.

The U.S. State Department sanctioned Russia’s Foreign Ministry Spokeswoman, Maria Zakharova, and one of Russia’s wealthiest billionaires – Alexey Mordashov, the chairman of the private investment firm Severgroup, as well as family members and companies affiliated with the oligarchs and elites.

Yury Slyusar, the President of United Aircraft Corporation, a Russian state-owned company and major supplier of aircraft to Russia’s military, has also been added to the U.S. sanction list, after he was previously designated by the EU, Australia, Canada, New Zealand, and the U.K.

Russian Ministers – Maxim Reshetnikov, the Minister of Economic Development, and Dmitriy Yuryevich Grigorenko, the Deputy Prime Minister and Chief of the Government Staff, were also designated by the EU, Australia, Canada, New Zealand, and the U.K. prior to being blacklisted by the U.S.

Minister Reshetnikov, according to the statement, also serves on the board of sanctioned Russian entities, including VTB Bank, VEB.RF, and Russian Railways.

At the same time, the U.S. Department of Commerce has put 71 more parties from Russia and Belarus on its trade restriction list, known as the Entity List, significantly limiting the Russian military’s ability to buy technologies and other items it is using in the war in Ukraine.

The U.S. administration also targeted yachts and planes in which the sanctioned members of the Russian elite have interests.

“OFAC is identifying Russia-flagged Graceful and Cayman Islands-flagged Olympia, as blocked property in which President Vladimir Putin has an interest… While the leader of Russia, Putin has taken numerous trips on these yachts, including a 2021 trip in the Black Sea where he was joined by Alexander Lukashenko, the OFAC-designated corrupt ruler of Belarus, who has supported Russia’s war against Ukraine,” the statement said.

The registered owners, as well as those involved in the management of Graceful or Olympia have also been designated, including the Russian Federation state-owned, but Cyprus-registered SCF Management Services Cyprus Ltd.; Ironstone Marine Investments; JSC Argument; O’Neill Assets Corporation, and JSC Argument’s sole shareholder and former director, Andrei Valeryevich Gasilov.

Shellest, according to the statement, regularly sails to the coast where Putin’s famed Black Sea Palace is located, while he uses Nega for sailing in Russia’s north.

The U.S. has also designated a number of international yacht brokerage or servicing companies, as well as San Marino-based SRL Skyline Aviation, suspected of “operating in the Crimea region of Ukraine and identified aircraft T7-OKY as property in which Skyline has an interest.”

The OFAC claimed that the jets were transferred to an anonymous offshore company, as part of a scheme involving jets owned by the Russian state lender VTB Bank, and controlled by the bank’s CEO Andrei Kostin.

“Today’s action demonstrates that Treasury can and will go after those responsible for shielding and maintaining these ill-gotten interests,” the Treasury’s Under Secretary said.

“We will continue to enforce our sanctions and expose the corrupt systems by which President Putin and his elites enrich themselves,” he concluded.