Russian Tankers Go Dark Out at Sea to Circumvent Sanctions

Russian oil and chemical tankers are disabling their on-board automated identification systems (AIS), thereby keeping authorities in the dark as to their whereabouts while at sea. The move is seen as an attempt by Russia to circumvent international sanctions brought about by the country’s invasion of Ukraine last month. 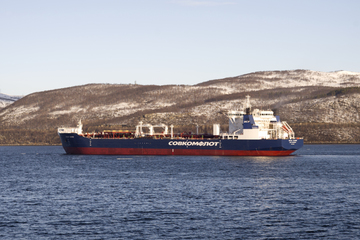 Russian oil and chemical tankers are disabling their on-board automated identification systems (AIS), thereby keeping authorities in the dark as to their whereabouts while at sea. (Photo: Tuomas Romu, Wikimedia, License)Dark activity, understood as a deceptive shipping practice, involves a vessel that operates while blocking or disabling its AIS transmissions from being received by other vessels or maritime authorities.

In the maritime industry, such shady practices can be used to circumvent sanctions as well as engage in criminal or terrorist activities, according to the U.S. Department of the Treasury.

This is why international maritime law stipulates that all commercial vessels must keep their AIS turned on while out at sea.

As for Russia, last week it was found that there were 33 occurrences of such dark activity from its oil-chemical and oil-product tankers, according to Windward Ltd., an Israeli consultancy firm that specializes in maritime risk management and domain awareness.

In a report made available to OCCRP, Windward categorizes a dark activity event as one that lasts more than three hours. The 33 documented cases by Russia last week more than doubled the weekly average reported for 2021.

Likewise, the firm’s data recorded over 140 instances of dark activity from Russian tankers this month alone.

“There’s no reason why they should have their AIS turned off,” Gur Sender, Windward’s program manager, told Bloomberg. “Investigating if a vessel is engaged in deceptive shipping practices related to specific regimes is crucial to protect your business from dealing with sanctioned entities.”

This increase in dark activity by Russian oil and chemical tankers can be seen as a response to the economic sanctions levied against Russia over the past month due to its invasion of Ukraine.

The same day, Shell plc, one of the largest oil companies in the world, announced its intention to “withdraw from its involvement in all Russian hydrocarbons, including crude oil, petroleum products, gas and liquefied natural gas.”

Similarly, on Feb. 27, the British oil and gas company BP plc announced its exit from its 19.75 percent shareholding in Rosneft, a Russian state-controlled energy company.

Ami Daniel, Windward’s Co-Founder and CEO, noted that since the outbreak of the Russian invasion, 22 unique vessels have entered Russia’s territorial waters for the first time.

These include cargo vessels, container ships, and tankers that hail from several different countries such as China, Singapore, and even two from the United States.

Windward’s observational data on Russia’s maritime activities show that such vessels, and the companies that use them, can bypass international sanctions out at sea by engaging with the Russian tankers in clandestine ship-to-ship operations.

As the risk management firm categorizes an instance of dark activity as one lasting at least three hours, it would give the vessels ample time to conduct their illicit business before carrying on their way and turning their AIS back on.