Fake Cops Threaten Australians With Arrest if They Don’t Pay

Australian Federal Police (AFP) warned on Wednesday of scammers pretending to be police officers when calling or sending emails to potential victims, claiming their bank accounts were tampered with and then tricking them into sending money to special bank accounts they have set up. 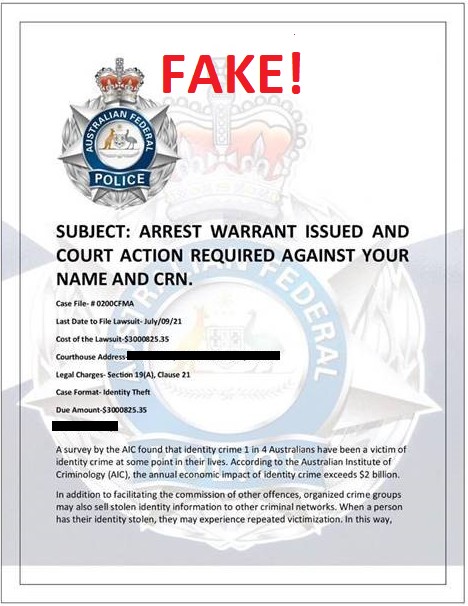 The criminals demand payment from the victims, instructing them to put funds into a designated bank account or purchase online vouchers. Some of the victims were informed of arrest warrants against them which they could avoid if they pay. (Photo: Australian Federal Police)In the last few months, police switchboard operators have received hundreds of complaints from people all around Australia who have reported getting calls from persons purporting to be from the AFP.

“Scammers are falsely identifying themselves as a Federal Agent and are telling victims they have identified suspicious activity linked to their bank accounts,” the police statement read.

After presenting worrying information to the potential victim, scammers ask for personal information such as a Medicare (healthcare insurance) number, address, and bank account details.

Finally, the criminals demand payment from the victims, instructing them to put funds into a designated bank account or purchase online vouchers. Some of the victims were informed of arrest warrants against them which they could avoid if they pay.

“Sadly, some people have been manipulated by these offenders, including an elderly woman who reported that she deposited more than AU$16,000 (US$11,625) into a scam bank account,” according to the statement.

Police believe that the spam calls are coming from overseas, despite the fact that the calls appear to come from a real Federal Police number, which the fraudsters were able to replicate in order to conceal their identity.

Detective Superintendent, Jayne Crossling, said that these cons frequently take from the most vulnerable people.

“Scammers take advantage of people’s trust in authorities and fear of doing the wrong thing,” she said.

Crossling pointed out that the financial loss is not the only damage that affects victims, as they can “feel an array of emotions — from helplessness and humiliation to anger and guilt.”

Police reminded citizens they would never phone, email, or contact anyone over social media, especially to threaten with arrest, request personal information or demand money, particularly not in Bitcoins or online vouchers such as for iTunes and GooglePlay.