The very people tasked with clamping down on and regulating Zimbabwe’s illegal gold industry are some of its biggest beneficiaries, according to a recent report by the Southern Africa Resource Watch (SARW). 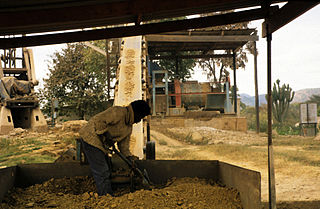 In Zimbabwe, the gold industry is overwhelmingly defined by so-called “ASMers” or Artisanal and small-scale miners. (Photo: Kevin Walsh, Flickr, License)“Government institutions involved in gold production and trade have lowered the bar for the illicit gold trade to flourish,” the report said. “It appears that policy-makers are aware of some of the key actors behind illicit gold trade, but tightening the noose around these illicit actors is proving to be elusive.”

In the midst of a mining recovery effort in Zimbabwe, gold mining is estimated to bring in some US$4billion a year to the African nation’s economy by 2023, a solid third of the $12 billion which is expected to be brought in by its mining sector in the same period

To facilitate and regulate that effort, Zimbabwe established a special commission to oversee the gold sector, the Gold Mobilization Technical Committee or GMTC. According to SARW, since 2017, the committee has come under the influence and de facto control of the Zimbabwean military and is rife with corruption.

In Zimbabwe, the gold industry is overwhelmingly defined by so-called “ASMers” or Artisanal and small-scale miners, according to SARW, that leaves the industry particularly vulnerable to exploitation and illicit financial flows.

“There is a strong feeling among ASMers that the GMTC is corrupt and extracts routine rents ranging from $50 to $500 per month,” said the report. It’s a hefty fee in a country where the median wage is less than $650 per month.

Most often illegal mining happens in fixed locations, such as closed down or temporarily shuttered legal mines; however, also popular in the country is a nomadic form of prospectors, colloquially known as “rippers.”

“This group of ASMers is generally referred to as rippers because they are ready to dig whenever a gold detector sniffs possibilities of gold,” said the SARW report. “This type of arrangement rarely depends on mining titles; they prospect and mine gold in claims that are not being utilised, on farms or any other space they want, even if it means destroying graveyards or homesteads in search of alluvial gold.”

Ripper work also brings with it a threat of violence, since during gold rushes, the ripper's sponsors will often employ machete gangs to displace rival miners.

The rush for gold in the resource rich African nation has been fueled by high export incentives. Traditionally Zimbabwean gold was transferred to South Africa to be refined into bullion. However, the emergence of Dubai as a mecca for the global gold trade — where illegally mined and even conflict gold from Africa is often laundered — has only made illegal mining more lucrative.