Dutch police arrested six men after they discovered six containers that were turned into prison cells and the seventh into a torture chamber equipped with a dentist chair with belts on arms and foot supports, pliers, knives and other utensils meant to cause pain. 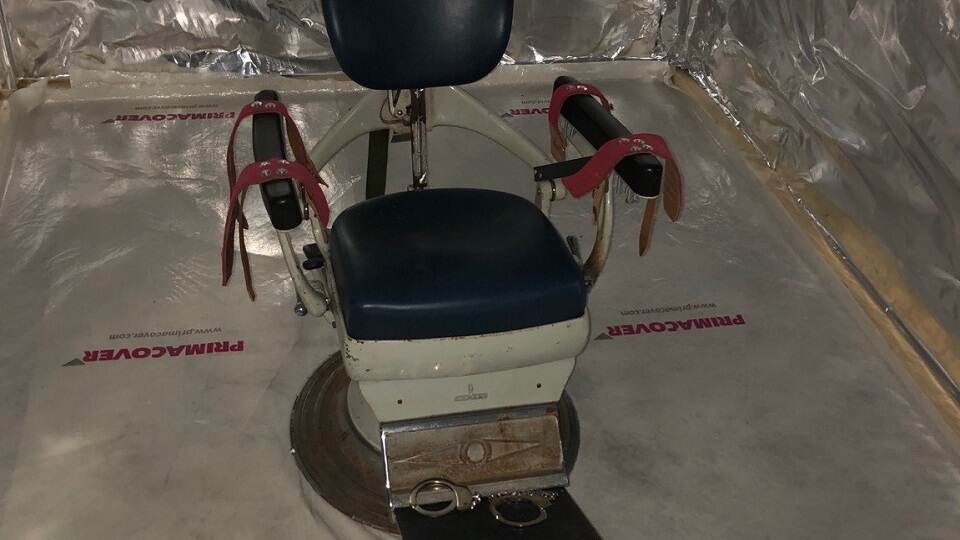 Dentist chair, modified for torture, found in hidden cells in the Netherlands. (Dutch Public Prosecution Service)A Tuesday statement from the Dutch National Police said that officers found the improvised prison in a warehouse in the Wouwse Plantage, a village near the Belgian border, after taking down an encrypted communication service used by organised criminal groups.

Potential victims were warned and went into hiding, according to the Dutch Public Prosecutor, while the police launched the operation, searching 13 locations, including the Wouwse Plantage village and arresting suspects in The Hague, Rotterdam, Spijkenisse, Utrecht, Nieuwegein and Lexmond.

A police video shows officers breaking into the countryside warehouse and finding the soundproof containers, six with handcuffs attached to the floors or ceilings and portable, chemical toilets and one with the dentist chair.

They also found saws, scalpels, various kinds of pliers, pruning shears, blowtorches, likely to be used for torture. Cameras were installed in a corner of each container, positioned to monitor the situation in the cells.

The arrest and discovery of a hidden prison and a torture site came as result of so-called ‘26Lemont’ operation that started in April in cooperation with French police, Europol and Eurojust.

It focused on EncroChat company, which was providing encrypted communication service to organized criminal groups for years. It is believed, according to the Dutch police, that criminals in the Netherlands were the platform’s major users.

“With this investigation, we were able to read more than 20 million messages between criminals in real time,” National Police Chief, Jannine van den Berg, said.

Since the beginning of April, investigators have been monitoring communications of “thousands of serious criminals,” which helped them “dismantle 19 drug labs in the country,” arrest more than 100 suspects of serious crimes and even “prevent multiple liquidations and other violent crimes,” she said.

Besides leading authorities to the makeshift prison, the intercepted communication resulted in the arrest of “60 suspects, the seizure more than 10,000 kilo of cocaine, 70 kilo of heroin, 12,000 kilo cannabis, 1,500 kilo crystal meth and 160,000 liter of a substance used to produce synthetic drugs,” read the police statement.

It also said that Dutch police seized “dozens of automatic weapons, expensive watches and 25 cars, including vehicles with hidden compartments, and almost €20 million (US$22.67 million) in cash.”

Since the decryption of EncroChat, authorities across the continent have made nearly 800 arrests in connection with “international drug trafficking and violent criminal activities.”