Myanmar seized the largest quantity of synthetic drugs in the history of Southeast Asia and uncovered first evidence of fentanyl production in the region, the United Nation Office for Drug and Crime (UNODC) announced on Monday. 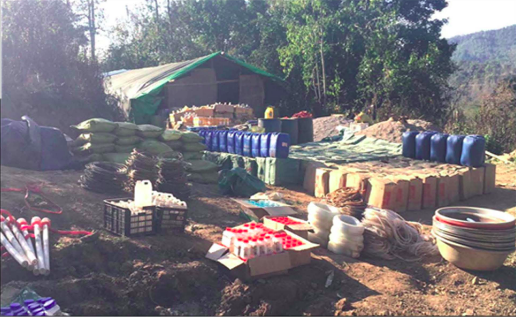 One of the four facilities discovered in Myanmar. (Photo: UNODC, Twitter). The anti-narcotic operation took place between February and April in the small village of Lwe Kham in the northeast of Myanmar but was under embargo until now.

Along with more than 3,700 liters of liquid fentanyl, police found around 193 million “yabas” - a popular kind of red methamphetamine pills - more than 163,000 liters of chemicals, drug-making equipment and weapons distributed between four different hideouts.

Thirty-three suspects of drug trafficking were arrested, while 97 others have been identified but are on the run. The police said there was “evidence of militia involvement.”

According to the UNODC, the unprecedented seizure is additional evidence that the so-called “opioid crisis” ravaging America is starting to reach South-East Asia.

Nicknamed “The Golden Triangle,” that includes parts of Myanmar, Thailand and Laos next to the Chinese border are an historical opium hub, but the seizure was the first instance of production of its synthetic pendant in the region.

Amid the decrease of poppy cultivation, “the Golden Triangle and Southeast Asia are poised to become a significant source of synthetic drugs” warned the UNODC’s statement.

In a report issued just last week, the UNODC highlighted the expansion of the domestic market for synthetic opioids in East and Southeast Asia.

While ten synthetic opioids were identified for the first time in the region in the past two years alone, the extent of their use remains “unclear,” said the report.

UNODC representative for South-East Asia, Jeremy Douglas expressed concerns their emergence could lead to “serious health harms for users in the region, as developments in other parts of the world have shown.”

The COVID-19 crisis only mildly affected Myanmar’s opium production, as the harvest took place at the beginning of the year, but exportation hardship could lead heroin users worldwide to turn to more risky substances such as fentanyl and its variations, analyzed the UNODC in a recent research brief looking at the pandemic impact on drug supply chains.