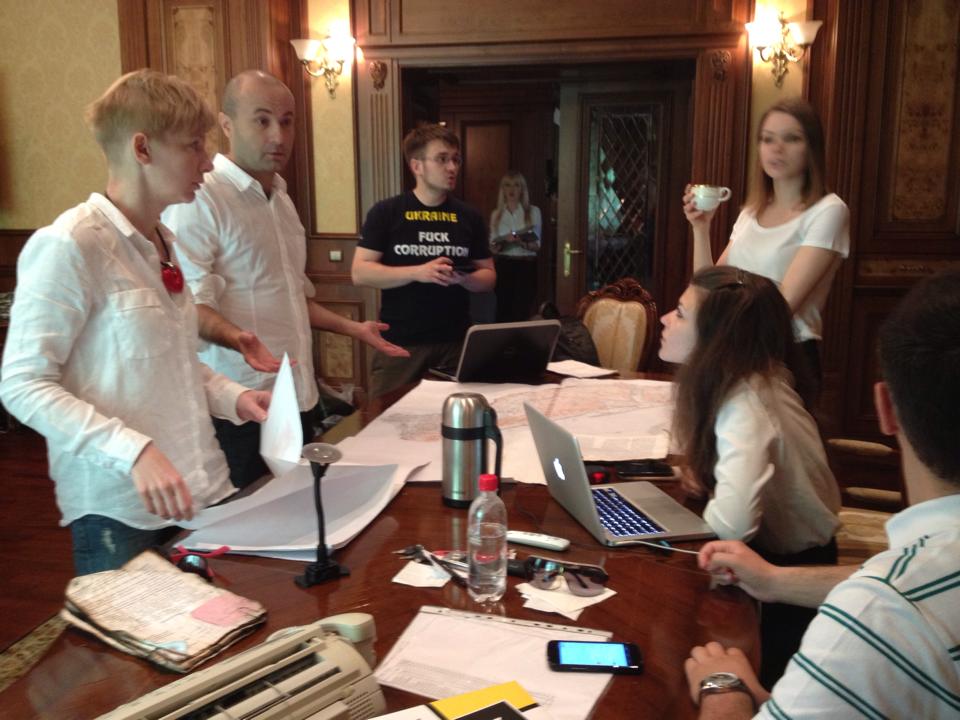 Documents exposing the enormous web of corruption involving Victor Yanukovych were in the spotlight at Mezhyhirya Fest, an international conference on investigative journalism held June 6-8 at the fugitive ex-president’s opulent country estate outside Kyiv.

The three-day festival at the sprawling 140-hectare estate, some 10 kilometers north of the capital, featured more than 30 events and brought together more than 300 leading Ukrainian and international experts and activists.

Debates and workshops on subjects ranging from social media use in an age of digital activism and legal aspects of investigative journalism were held at “Putin’s House,” the guest house in which Russian President Vladimir Putin allegedly stayed on his visits to Mezhyhirya. Putin is now harboring Yanukovych, who is wanted for mass murder and corruption charges, in Russia.

The venue represented a symbolic victory, said Anna Babinets of YanukovychLeaks, the team of Ukrainian journalists who first gained access to the compound following Yanukovych’s hasty flight from Ukraine on Feb. 22 as the EuroMaidan Revolution succeeded in ousting him from power.

“This festival is a step towards strengthening the victory of democracy in Ukraine, and the venue is a reminder of the fact that things have changed. It’s great to be able to hold the event here,” Babinets said.

The band Dakh Daughters provided the entertainment on June 6.

Attracting international media attention, the team discovered some 200 folders containing more than 25,000 records documenting the ex-president’s activities. The majority were retrieved from the estate’s swimming pool and the Dnipro River which skirts its perimeter, into which Yanukovych and his team presumably threw the stash in the hopes of preventing details of his illicit finances from ever emerging.

They were not so lucky. With the help of 17 scanners and more than 60 volunteers, including experts in the preservation of documents, the team dried and scanned each sheet of paper before uploading the incriminating evidence onto “yanukovychleaks.org,” a website created for this purpose with the assistance of the Organized Crime and Corruption Reporting Project (OCCRP).

On the first day the site attracted almost two million visitors, and now hosts 23,456 records in Ukrainian, Russian and English. A half-hour documentary about the team’s efforts premiered at the event.

Among the documents uncovered is a US$ 12 million hand-written check to an undisclosed beneficiary, a €39 million (US$ 53 million) chandelier supply contract for the ex-president’s mansion and details of how his security entourage followed the movements of EuroMaidan activists. One notebook found, which belonged to Konstyantyn Kobzar, head of Yanukovych’s personal security detail, revealed how closely the team monitored Tetyana Chornovol, a Ukrainian journalist known for her investigations into corruption, in the days leading up to her brutal beating by several men on Christmas Day.

In cooperation with Ukraine’s General Prosecution Service, dozens of court cases have been opened against the ex-head of state and members of the so-called “Family,” Yanukovych’s close circle of advisers, who continue to evade law enforcement agencies.

According to First Deputy General Prosecutor Mykola Holomsha, some 400 business entities were involved in money laundering under Yanukovych’s rule, many of them state-owned. More than US$ 32 billion was exported when corrupt officials fled the country in February, while only US$ 187 million has been seized since the investigation began, Holomsha said.

“I have never seen stealing on such a scale. All government agencies were corrupt from the bottom up. The state suffered total losses of around US$ 38 billion,” he said at a press conference on the first day of the festival. “People ask us why these people were able to escape. My answer is simple: people who controlled the borders were themselves appointed by the former regime. They refused to prevent them from leaving.”

Holomsha also spoke of crimes committed against journalists, which have increased in frequency since the armed conflict in the east began. “Over 90 acts of aggression have been recorded against journalists in Ukraine since the start of the crisis. We will put all our efforts into getting these crimes investigated,” he said, adding that the prosecution service is currently looking into 210 cases of interference in journalists’ work.

However, Holomsha did not disclose preliminary results of the prosecution service’s investigations, a fact which provoked skepticism among some of those present.

“Real cooperation between journalists and law enforcement is impossible. In past years neither journalists nor the general public have had any access to these agencies. We wrote letters and articles to which they paid no attention and we have never received any responses from them,” said Denis Bigus, a member of the YanukovychLeaks team.

“Mr. Holomsha has spoken honestly today and I’m grateful to him for this. But this is nothing more than adequate cooperation – it’s certainly not a partnership,” he said.

Babinets was more optimistic. “I believe the way Mr. Holomsha spoke gives hope of a new start. He may not have announced any real results but phrases such ‘I am accountable to you’ suggest a new relationship between state organs and civil society and a new system of transparency are emerging,” she said.

Among the most interesting details disclosed was the degree of international cooperation involved in the agency’s criminal investigation. Bank accounts belonging to members of the Family in the United States and the United Kingdom have been frozen and 66 percent of foreign-based assets connected to Yanukovych have been inspected, according to Holomsha.

While Mezhyhirya served as a symbolic venue for the proceedings, a performance on June 6 by Dakh Daughters, an art-rock outfit, provided a fitting soundtrack. The group played an active role in the EuroMaidan Revolution events, and sang on Independence Square in December in front of the thousands who had braved the bitter cold to stand together and fight for a democratic future for Ukraine.

The festival culminated in the presentation of Ukraine’s first-ever investigative journalism award. It went to Lyubomyr Ferens of TVi, an independent Ukrainian TV channel, for his investigation into government involvement in the killing of Serhiy Nigoyan, a 20-year-old Armenian EuroMaidan activist shot during the Hrushevskoho Street clashes in January. He was one of more than 100 protesters killed allegedly on orders of Yanukovych and his former top advisers.