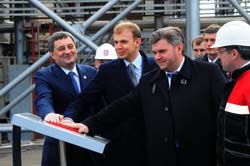 Serhiy Kurchenko is the latest Ukrainian gas-and-oil multimillionaire whose wealth is alleged to have come at least partially from government-blessed schemes at the expense of the rest of the nation.

Kurchenko denies allegations of wrongdoing from members of Parliament and media investigations, while Ukraine’s general prosecutor has found nothing illegal in his dealings.

The 28-year-old Kharkiv native estimates his fortune at $400 million, which has allowed him to go on a buying spree. He has acquired one of the nation’s leading media companies, the Kharkiv Metalist football team and the Odesa Oil Refinery, among other prize assets.

Since February, Kurchenko’s business activities have been conducted through the newly established East European Petrol and Energy Company (VETEK) with offices in Kyiv and Moscow. In an interview with Forbes Ukraine, Kurchenko also admitted owning GazUkraina-2009, the source of some of this wealth.

So how did Kurchenko make his money?

The Kyiv Post tried to ask Kurchenko, but he did not respond to messages seeking comment for this story. People who know him are reluctant to talk about him.

Here’s what journalists and others have pieced together:

According to a 2010 report in the Delovaya Stolitsa business newspaper, Kurchenko appeared to have the backing of those in power, allowing him to buy state-produced liquefied natural gas (LNG) cheaply and sell at huge markups in the private sector.

State companies produce about 70 percent of the 550,000 tons of LNG produced annually in Ukraine. Once a month, an auction of state-produced LNG takes place at highly discounted prices set by the Cabinet of Ministers of Ukraine, headed by Prime Minister Mykola Azarov.

The gas is supposed to be purchased by local gas distributors and sold to average Ukrainians at a subsidized rate.

But that didn’t happen in 2010, according to Delovaya Stolitsa. Instead, the Ukrainian business weekly reported that one company – GazUkraina-2009 – bought the entire 8,000 tons of fuel offered by state-owned enterprises Ukrgazdobycha and Ukrnafta.

This appeared to be a complete change of the rules of the game.

Before, private companies were not allowed to buy the cheap gas supposed to be sold to households at a discount. Instead, this gas showed up at petrol stations, where the selling price was four to five times higher than the auction prices, according to a complaint to prosecutors made by parliamentarian Yuriy Syrotiuk of the opposition nationalist Svoboda Party.

Moreover, energy experts say the auction appeared to be rigged, since other traders in LNG were not allowed to participate. Additionally, in autumn 2012, two gas companies said they could not buy LNG from abroad because of customs problems.

As a result, energy experts say, GazUkraina-2009 had a de facto government-supported monopoly. Syrotiuk’s complaint alleges that the Kharkiv companies that make up the GazUkraina-2009 group control more than 80 percent of all state production of LNG.

Sergiy Piven, chairman of the Liquefied Gas Producers Association, has complained repeatedly about the monopolization of the industry but has never named the offending company.

Kurchenko apparently has the golden touch in oil as well.

Ukraine is heavily dependent on

Syrotiuk alleged that during nine months of 2012, the State Customs Service granted customs clearance for 397,000 fewer tons of oil products than the actual amount delivered to the Ukrainian market by railway. This way, Syrotiuk alleges, a considerable quantity of gasoline is imported to Ukraine without paying excise duties.

According to Syrotiuk, Kurchenko-linked groups used a scheme called “interrupted transit” to avoid paying excise duties. Goods are supposedly delivered from Ukraine to another country, allowing the exporter to escape paying excise tax because the oil is considered to be merely in transit. But the commodities do not actually leave the country and are sold on the internal market.

The oil products are “exported” through the companies Armada Plus and Zovnitransgaz, which according to state documents transported petrol to tankers operated by a Belize company, Zevidon Trading, Ltd.

According to the State Statistics Service, trade with Belize first took off in October 2012, when Ukraine exported nearly $60 million worth of gasoline to the tiny Caribbean nation. By year’s end, gasoline exports for the last quarter of 2012 reached $209 million.

This year’s growth has been even more impressive. In the first five months of 2013, Ukraine more than tripled last year’s total exports to Belize, including some $740 million worth of oil products.

But the numbers are clearly fake. According to the Statistical Institute of Belize, Ukraine is not even a major trade partner with Belize, a nation whose total trade with its largest importer, the United States, for the same period is less than $200 million. The Ukrainian figures exceeds Belize’s trade with every country on earth between January and May.

Following Syrotyuk’s complaint, GazUkraina 2009 issued a statement denying his allegations, claiming that as of January it controlled only 14 percent of the country’s liquefied gas market. The group also denied that any of its affiliates are directly involved in imports of gasoline.

The General Prosecutor’s Office, likewise, found no violations in the activity of the GazUkraina 2009 group.

In June, Oleh Medunytsia, a member of parliament with the opposition Batkivshchyna faction, submitted a bill calling for an independent investigation into the role of state authorities in smuggling, market monopolization and violations in public procurement involving GazUkraina-2009 group, following the investigations by Forbes and Mirror Weekly.

The bill is still listed as being under consideration as this issue of Kyiv Post went to the print.

Other oil traders, who say they are locked out of the market by government favoritism to Kurchenko, find plenty of things to complain about.

By the fall of 2012, when GazUkraina 2009 started to import oil products to Ukraine, competing Ukrainian oil products importers started to face numerous problems and delays from state customs officials. “We paid taxes and transferred the advance payment to the account of the State Customs Service” on time, said Andriy Kuzmenko, CEO of Rompetrol, in November 2012. “But the customs officials wanted to collect samples to confirm the petrol quality. However, they did not do it, and now they do not accept declarations, and the process of customs clearance is delayed.”

A rapid and stunning rise

Making money from the gas-and-oil trade is a well-worn path to riches for Ukraine’s tycoons, including Yulia Tymoshenko, Ihor Bakai and Dmytro Firstash.

In a biography on the Kharkiv Metalist football club website, Kurchenko said that he got his first job at 16 in the Kharkiv-based company Ekspogaz. In an interview with Forbes Ukraine magazine this summer, he said that he started there as a delivery boy. The company belonged to Kharkiv Igor Humennyi, who sold liquefied natural gas. After a few years, Kurchenko rose to head of the company’s wholesale department.

Kurchenko launched his own business when he was 21, registering the real estate company Kaskad KSV. Kurchenko told Forbes that his company bought land from residents of Kharkiv Oblast.

Public sources offer little more information. The website of GazUkraina-2009 (currently inactive) only indicated that the company specializes in selling liquefied gas and oil products and intends to gain leadership in these markets in the future.

In November 2012, a former employee of GazUkraina-2009 provided Forbes magazine with a list of 54 companies that purportedly belong to the group. The enterprises had been registered between 2008 and 2011 in Kharkiv, Simferopol and Kyiv by residents of Kharkiv. Their founders were also the CEOs.

Many companies from the list participated in governmental tenders for delivery of equipment for oil and gas sector enterprises. Some of them, while filing the tender papers, used the phone number of GazUkraina-2009 as a contact number.

Other companies, purportedly part of GazUkraina 2009, have been identified in numerous court rulings containing such statements as “fictitious entrepreneurship” to create “a pretense of carrying out financial and economic activity”.

By the fall of 2012, GazUkraina-2009 representative Andriy Koshel, who introduced himself as Kurchenko’s deputy, said the list of companies provided to Forbes had nothing to do with the group. The group’s press service claimed that GazUkraina 2009 consisted of about 30 companies, but refused to name them. Currently, Koshel is listed as the sole shareholder of Skhidno-Evropeyska Palyvno-Energetychna Kompaniya (VETEK), a holding company managing some of Kurchenko’s key assets. Kurchenko admitted being Koshel’s employer in his Forbes interview.

In July, Kurchenko also answered a question about the group’s corporate structure. He told Forbes reporters that in a couple of months VETEK would present a list of 10 companies cooperating among themselves. He said the holding’s structure would be “clear and legitimate” However, Forbes journalists resigned before receiving any information.

As the VETEK group continues its spectacular rise, the question remains whether Kurchenko is his own man or a front for other interests.

“I am sure that he is a man simply representing other persons, who are known to the public, but who do not want to be known to act in this sphere,” said opposition leader and member of parliament Vitali Klitschko. “I have no facts and I don’t want to comment on rumors. But it looks very strange when people at such a young age become so wealthy".