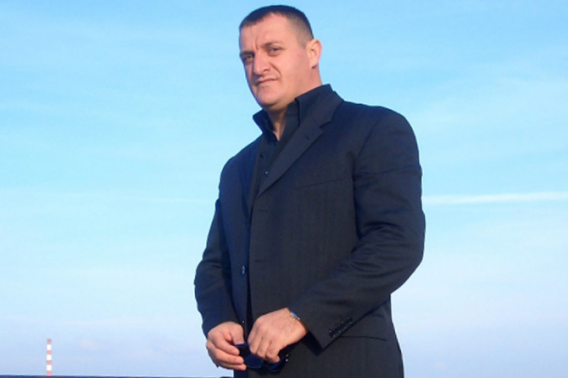 By Bojana Jovanovic and Stevan Dojcinovic

After serving three-and-a-half years in prison in Serbia for his role as the head of a group of international cigarette smuggleres, Stanaj was free on an usnusual agreement after posting "bail" of €400,000  that granted him the ability to travel before serving the remainder of his 6-year sentence.

According to court records, Stanaj ran a cigarette smuggling group using the business structure and connections of his family company, Roksped, which is the exclusive importer of cigarettes for Montenegro.

The company, owned by Anton's father, Rocco Stanaj, imported cigarettes from 2004 to 2007 into Montenegro via offshore companies registered in Cyprus and in Delaware, and then sold those cigarettes tax-free in Montenegro.

Records show that the imported cigarettes were also smuggled into Serbia, and from there to Croatia, Hungary, Austria, Slovenia and other countries in the European Union.

The indictment by the Special Prosecutor for Organized Crime in Serbia alleges that in addition to the original smuggled and counterfeit cigarettes, the company also sold cigarettes it purchased from other manufacturers in Dubai, Greece, Bosnia and Herzegovina, Croatia, Germany, China and Serbia.

Despite Anton Stanaj being arrested and tried for smuggling cigarettes, the Roksped company was never investigated for its role in the scam. Instead, the company was involved in the privatization of agricultural companies and wineries in Serbia.

Even Japan Tobacco International (JTI), one of the largest international cigarette companies, did not want to terminate its relationship with Roksped despite the fact that two JTI brands, Winston and Monte Carlo, were among those Stanaj smuggled. The company has so far remained the exclusive distributor for JTI in Montenegro.

Serbian authorities never launched an investigation into the Stanaj family's financial operations in Serbia, and therefore never determined where the company invested its cigarette smuggling proceeds.

However, research by the Center for Investigative Journalism in Serbia (CINS) and the regional network of journalists at the Organized Crime and Corruption Reporting Project (OCCRP) revealed that Anton Stanaj had business contacts in high places. He worked not only with players in the criminal world, but also with well-known Serbian businessmen like Bogdan Rodic, and even with the former Minister of Energy from Djindjic's government, Goran Novakovic.

Anton Stanaj's closest collaborator, however, was his friend Zoran Copic, who was indicted in Serbia and Bosnia and Herzegovina for several crimes including laundering money for fugitive drug boss Darko Saric.

Copic's business deals in Serbia were mostly done through Roksped's Serbian subsidiaries Europamont, based in Novi Sad. According to an investigation by OCCRP/CINS, that company, both in partnership with Copic and independently, bought interests in the many companies, including Agrovojvodina, Agrocoop, Zmaj, Stanisic, Banat seeds, Mlinpek, Erdevik, Secer + or "Sugar Plus", MEA and Panonliv. 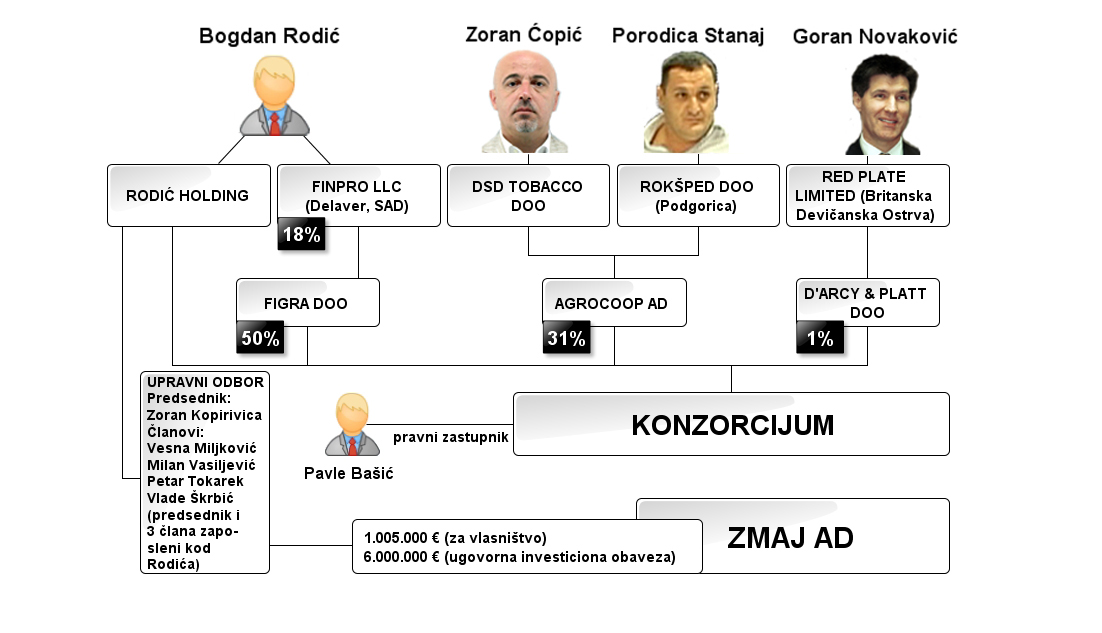 The business scheme of the Zmaj company

Copic confirmed to OCCRP reporters that he also participated in the privatizations with Roksped, saying that Anton Stanaj and his brother Nuo were long-time friends of Copic's.

Most of the privatizations ended in bankruptcy.

Stanaj's indictment in Serbia did not affect Roksped's business in Montenegro. Instead, according to records obtained by OCCRP and CINS, Roksped went on to secure public procurement jobs worth €3.8 million  in the years after the charges, including a job selling tens of thousands of euros worth of cars and spare parts to the various Montenegrin government bodies. All of these deals were made while Stanaj was in prison.

Montenegrin media have not been writing about Stanaj's criminal activities, presumably for fear of angering Roksped executives, who control the distribution of newspapers in Montenegro.

According to a report CINS / OCCRP obtained from the State Agency for Investigation and Protection Agency of Bosnia and Herzegovina (SIPA), the Stanaj family is working closely with Naser Kelmendi, one of the most high-profile drug dealers in the region. Kelmendi,  who is originally from Kosovo, spent part of his life in Bosnia and Herzegovina, and is now a fugitive.

In the same report, SIPA said that Anton Stanaj had close business ties with Ekrem Luka, one of the richest people in Kosovo, who controls the Serbian-Albanian mafia and drug trafficking between Pristina and Belgrade.

An agency called Laveco established Delaware-based companies for Stanaj. Laszlo Kiss, a Romanian businessman charged with money laundering and complicity in embezzlement was one of the formation agents of Laveco when Stanaj's firm was registered.  Kiss was a representative for the former Taylor network, a New Zealand based registration company that registered firms for Hezbollah, organized crime groups and many other criminal groups.

Anton isn't the only member of the Stanaj family with a criminal record. His brother, Nuo Stanaj was indicted in Serbia in 2011 for abuse of privatization, along with Copic. The indictment states that Nuo Stanaj, one of the owners of Agrocoop from August 2006 to February 2007, took part in the unlawful sale of corporate assets in Belgrade.

For more information on Anton Stanaj, read his biography in our Persons of Interest database.