Drug Use Spikes in 'Transit Countries' 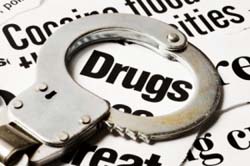 While illicit drug use remained stable in much of the world over the past several years, it rose disproportionately in so-called 'transit countries,' – those countries that form the route between suppliers and end-consumers – according to data released by the United Nations in it’s Annual World Drug Report.

For example, cocaine users have multiplied in West and Central Africa, where about half of the cocaine imported now stays in the region, according to a speech by UN Secretary General Ban Ki-moon at this year's International Day Against Drug Abuse and Illicit Trafficking. And heroin use is now at a global high in Afghanistan and Iran, where opium and poppies are grown, while it has dropped in Western Europe.

This phenomenon is about the economics of the trade. In transit countries, medium-level traffickers moving drugs through to Western Europe and the United States are paid in slices of their own supply. It’s cheaper for their bosses that way, and leaves no paper trace.

“As a consequence, these people have suddenly drugs in their hands,“ said UNODC expert Thomas Pietschmann.“They wish, however, to have money.“ To turn drugs into money, mid-level traffickers sell their drugs locally; thus, consumption spikes.

But since source and transit countries tend to be short on social programs and government funding, they’re ill-equipped to handle the fallout of this increased drug use.

“Typically, drug treatment in lower and middle income countries is operatiing from a fairly low baseline,“ said Nicolas Clark, a medical officer at the World Health Organization (WHO). “Often the models of drug treatment are either nonexistent or they are run through police.“

In Russia, the barriers are particularly high. As one of the first stops out of Afghanistan, Russia is a quintessential transit country, and 300,000 people died of heroin overdoses there last year, according to a Reuters report. But in a nation whose patriotism and political traditions mean it won't even acknowledge the problem, treatment is hard to come by.

Russia's punitive approach to rehabilitation precludes the methods of medically controlled detox and harm-reduction that are almost universally accepted today. Even NGO-sponsored syringe distribution programs have been quashed by the Kremlin, and methadone and other maintenance therapies have never been permitted in the country.

“There are often ideological barriers to the use of methadone,“ said Nicolas Clark. The Russian goverenment doesn't allow it to be registered or prescribed because it considers subsistence drugs the wrong treatment approach. Instead, the state promotes only detox-based treatments, which Clark said have very low success rates for heroin.

But even where they aren't legally banned, maintenance therapies aren't likely to take hold in most transit countries. Founding methadone clinics requires a hefty administrative push, and financing that usually falls to profit-driven pharmaceutical companies. In poor countries, they don't see much incentive to do so.

They tend to experience government change-ups frequently, which can hinder the stability of state-run health care and other programs. And, certainly, no robust private sector exists to fill that void. Finally, in these countries the political incentive for developing treatment options does not exist. Border security and interior programs compete directly for limited funding, and as Nicolas Clark said, “drug treatment is not a winner for politicians.“