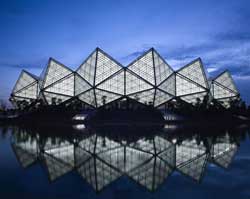 Later this month, the eyes of the world will be focused on a shimmering glass and steel building newly erected on the shores of the Caspian Sea to welcome the pop stars and television crews from more than 40 European countries who will broadcast the Eurovision Song Contest 2012 spectacle.

Azerbaijan won hosting rights to the popular extravaganza last year when the Azerbaijani pop duo of Ell and Nikki sang their way to victory in Eurovision 2011.  The Azerbaijan government responded proudly with plans for a new $134 million concert showplace called the Crystal Hall which seats 23,000.  Finished only a few weeks ago, it was a tense race to get the venue ready in time. Its importance was signaled by the frequent visits made by President Ilham Aliyev and First Lady Mehriban Aliyeva to the bold geometric structure as it rose amidst the construction site.

But their interest was not just ceremonial and patriotic.  An investigation by the Organized Crime and Corruption Reporting Project (OCCRP) and Radio Free Europe/Radio Liberty has discovered that the first family is personally profiting from the massive construction project through its hidden ownership in the AZENCO construction company.

Trucks from AZENCO during construction of the hall

official announcements as the German company Alpine Bau Deutchland AG.  Yet some of the equipment at the construction site is stamped with the company name AZENCO . Rolf Herr, a representative of Alpine Bau in Azerbaijan, described AZENCO as a subcontractor.

He would give no other details of its involvement. The Alpine Bau press office in Germany did respond to an email by OCCRP.

“We usually don't publish any information regarding our business contacts with subcontractors. Therefore we unfortunately cannot answer your questions,” said Nicole Weixler, a marketing manager, in the email.

AZENCO is owned through a series of front companies that mask the real owners. The official newspaper of the agency for privatization of state property  in Azerbaijan announced in 2010 that Baku-based Interenerji MMC acquired 97.5 percent of the shares of AZENCO. According to privatization records from March 2010, ADOR MMC, another Baku-based company controls 70 percent of the ownership of Interenerji. That company’s registration documents list its legal address as “7 Samed Vurgun Street”. The registered occupants of that address at the time were Mehriban Aliyeva, Leyla Aliyeva and Arzu Aliyeva, the wife and daughters of the president respectively.

In 2010, Radio Free Europe/Radio Liberty investigated the privatization of the State Aviation Company’s infrastructure, including Azalbank (currently Silkwaybank), which also has as a registered shareholder Arzu Aliyeva, residing at the same address. Presidential spokesperson Azer Gasimov at the time confirmed that the shareholder was indeed the president’s daughter.

Gasimov did not respond to repeated phone calls and a written inquiry about the president’s family’s connection to Azenco and the appearance of a conflict of interest if Azenco is profiting from state-funded construction projects.

Eurovision 2012 event coordinator Sietse Bakker said that it was not the proper organization to answer questions about the First Lady or the Crystal Hall construction.

Bakker said the city of Baku commissioned the multi-functional indoor venue before Azerbaijan won Eurovision. “We have no involvement with the construction of the hall, so you should ask this question to the responsible authorities.”

Record sources do not support Bakker’s contention. Presidential order 1620 from July of 2011 to build the concert hall came after the May Eurovision victory.

“I have not seen written records,” Bakker said, “but it doesn't take much to realize that there is quite a lot of planning going into the construction of such venue,” Bakker said.”
The Crystal Hall is the second project to raise conflict of interest questions about Azenco.

It also helped construct the grandiose US$38 million State Flag Square near the Crystal Hall, which briefly held the Guinness Book of World Records title for tallest flagpole in the world.

A few months after it was put up, Azerbaijan’s 162-meter flagpole was surpassed by an even bigger flagpole in Dushanbe in Tajikistan designed by the same American firm.

A spokesman for the Cabinet, Akif Ali, refused to respond to questions about how Azenco came to be chosen as a partner in the project.

Azenco has been employed on numerous state-funded projects less showy but no less profitable than the Baku work. State Procurement Agency records show that in 2010 alone the company was awarded contracts worth US$79 million. The company also recently gained control of Sumgayit Technology Park, a former State funded enterprise started by Azerenerji, the government owned energy production company.

Azer Mehtiyev, director of the Center for Assistance to Economic Initiatives, a politically independent think tank, said Azenco was a clear example of a scheme to misappropriate some of the country’s big oil money.

"With the big oil money flowing into the budget, a parallel process of monopolization of spheres of economy, re-division of state property … (made) way for the misappropriation of revenues,” Mehtiyev said.   “Big infrastructure projects financed by oil revenues are mainly distributed to companies which belong to high-ranking officials. The government keeps the information about owners of the companies secret. The state contracts are assigned to companies established in offshore zones with unknown owners making the public control over the process impossible,” he said.

According to Mehtiyev, it is especially difficult to get information about the business interests of the president’s family.

Azerbaijan adopted an Anti-Corruption Law in 2004 that obliges officials to declare the income and property holdings of themselves and their relatives.

In August 2005 (order number278), the president ordered the Cabinet of Ministers to prepare a special form on which officials would give that information within two months. But the forms were never drafted and officials never provided the information. It is not clear if the president or the first lady, who is also a member of parliament, have submitted declarations in the past decade.

The Presidential administration and the Central Election Commission will not respond to questions about their property.  A written inquiry sent to the First lady’s web page was not answered.

In January 2011 President Aliyev declared that the government would take serious measures against corrupt officials.

The 2012 Eurovision event will have one other tie to the first family besides the new showcase auditorium. Between acts, the singer chosen to entertain the crowd just happens to be the President’s son-in-law.