A large block of European Parliamentarians are demanding the release of an Azerbaijani investigative reporter who was jailed earlier this month.  In a strong show of support for journalist Khadija Ismayilova who was jailed on what many believe are political charges, 40 members signed letters to Azebaijan's President Ilham Aliyev and Minister of Justice Fikrat Mammadov.  The letters were sent out by EP member Monica Macovei of Romania last week. 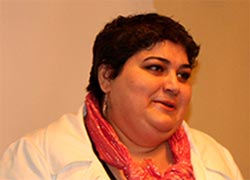 The letter said that they recognize the arrest and detention of Ismayilova as unfair and detrimental to media freedom and human rights in Azerbaijan. They urged her release, and that the government ensures a fair trial, ceases an intimidation campaign they say is targeted at her and other investigative reporters, and reconfirms the governments stated goal of freedom of press in the country.

A second letter to the Commissioner for Human Rights, reminded Azerbaijan of its international obligations as a member of the OSCE in the Council of Europe. The EP members called on the High Commissioner to intervene on behalf of Ismayilova to secure her release.

Ismayilova, an investigative reporter for Radio Free Europe (RFE) and the Organized Crime and Corruption Reporting Project, was jailed on a bizzare charge of encouraging a person to commit suicide after she allegedly played a role in denying a journalist a job at Radio Free Europe.  The journalist allegedly became suidical after the rebuff and complained to authorities who arrested Ismayilova pending a trial currently scheduled for February

"The 40 members of the European Parliament have added their voice to the worldwide appeals to release Khadija. The government and president of Azerbaijan need to understand that they have to free Khadija. Khadija’s work is in the best interest of the Azeri public and it is recognized both in Azerbaijan and abroad," said Paul Radu, executive director of OCCRP.