The wife of Mexico’s president has attempted to stave off fresh accusations of corruption by promising to sell her share in the lavish mansion at the center of a fresh scandal for the nation’s embattled first couple.

Under pressure from public protests, First Lady Angelica Rivera yesterday released a video address in which she pledged to give up her stake in the opulent house, which is owned by a construction company linked to US$ 3.75 billion-worth of government contracts.

Ingeniería Inmobiliaria del Centro (IIC) is a subsidiary of Grupo Higa, one of a group of Chinese and Mexican companies that won an uncontested bid for a lucrative contract to build a bullet train line. The deal was revoked by Rivera’s husband, President Enrique Peña Niento, on Nov. 6 – just three days after it was agreed – after outcry from the opposition about the bidding process. 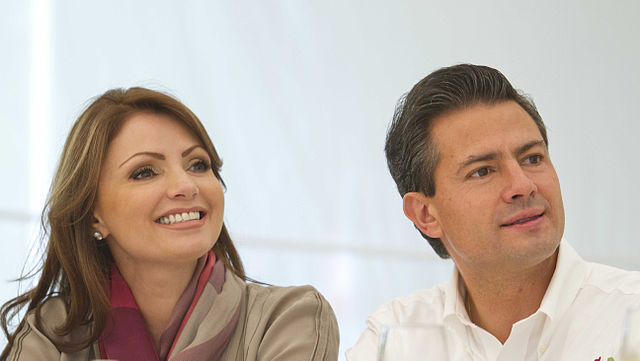 “I don’t want [the mansion] to continue to be a pretext to offend and defame my family,” said Rivera in the broadcast. “Today, I am here to defend my integrity, that of my children and of my husband.”

In a seven-minute address, Rivera – a telenovela star – said it was in 2009 that she began planning to build a house with earnings built up over her 25 years in show business. She claimed she happened to meet Juan Armando Hinojosa, the owner of Grupo Higa, the same year, and construction on the IIC-owned plot – which was adjacent to a property she already owned – ran from July 2010 until January 2012. She married Peña Nieto in November 2010.

A report by news site Aristegui Noticias published Nov. 9 estimated the mansion’s value at US$ 7 million. However the first lady said she purchased it for just over half that price. The plan, she claimed, was to pay it off over eight years at a 9 percent interest rate; she said she had now paid off 30 percent of it.

It has been a difficult week for Peña Nieto, who controversially chose to leave Mexico on a state visit to China despite ongoing public outrage over the disappearance and suspected massacre of 43 student demonstrators from Ayotzinapa Rural Normal School in September. The front door of the National Palace, a former presidential residence in Mexico City, was set on fire by protesters last week.

The crime has caught international attention as one of the grisliest scandals in Mexico’s recent history. Attorney General Jesús Murillo Karam told a Nov. 7 press conference that garbage bags containing burnt and dismembered human remains had been recovered. This matches the graphic testimony of three detained suspects who confessed to killing the students, burning and chopping up their bodies, then tossing bags of the charred remains into a river.

The burnt remains are difficult to identify as those of the students. Investigators have sought help from forensics experts in Austria and Argentina.

Earlier this month, authorities captured the mayor of Iguala, José Luis Abarca Velázquez, and his wife María de los Ángeles Pineda Villa, on suspicion of masterminding the mass kidnapping. However, the case of the students is far from settled; it appears to be a tipping point for a public wearied by ongoing endemic corruption in the country.

Demonstrators sought to drive their point home by disrupting tourism to Acapulco, Mexico’s largest resort city, on a three-day weekend. Although Nov. 17 was Mexico’s Revolution Day holiday, some flights to the city were canceled after protesters surrounded the airport, and hotel owners reported 14,000 room reservations were canceled, according to the Los Angeles Times.