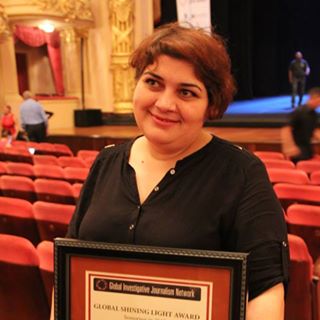 The criminal libel trial of Khadija Ismayilov, an investigative journalist and OCCRP partner, is ongoing in Baku, Azerbaijan. A travel ban preventing her from leaving the country remains in effect.

The case is a private prosecution brought by Elman Hasanov, who claims that Ismayilova published two defamatory documents about him on her Facebook page earlier this year.

Hasanov alleges that one document said that Azerbaijan’s Ministry of National Security (MNS) used a sex tape to blackmail him into becoming a paid informant for them, and the other was a report that claimed he had raped a woman in 1992 and used connections to have the charges dropped, after which the victim committed suicide.

Under Article 147.2 of Azerbaijan’s Criminal Code, Ismayilova could face up to three years in prison if found guilty of defamation involving the accusation of a grave crime.

Ismayilova is not alone among investigative journalists in facing criminal charges in an attempt to intimidate and silence her. OCCRP partner Anuška Delić is on trial in Slovenia on charges of publishing classified information as a result of a story on links between a political party and a neo-Nazi group. Her case began with a preliminary hearing on Oct. 15.

OCCRP editor Andrew Sullivan says the trend in Azerbaijan is particularly disturbing. "The government of Azerbaijan has waged a campaign of arrests, intimidation, slander and extortion against the people who seek to tell the truth and change their society for the better,” he said. “If the government is honest about its commitment to democracy, it will stop harassing Khadija and release the many advocates of democracy it is holding in its prisons."

According to Ismayilova, the lawsuit is simply the latest in a series of events intended to discredit her as a journalist and dissuade her from researching and writing investigative stories critical of the ruling elite in Azerbaijan. Her previous work has documented extensive and hidden sweetheart deals involving relatives and friends of Azerbaijani President Ilham Aliyev.

She says this latest round dates back to Oct. 2, 2011, when Ramin Nagiyev, a former MNS officer now living in exile, sent her a copy of what appeared to be an MNS report on the recruitment of Hasanov, an opposition activist. The report claimed that with the help of a secretly-filmed sex tape, a deal had been made to pay Hasanov US$ 763 per month to report on opposition activities.

She wasn’t able to check its authenticity and did not post the document at that time. She says that she never received any document about a rape.

Five months later, in March 2012, Ismayilova herself faced a blackmail attempt for her continued investigations of corruption. A threatening letter was sent to her home along with still images from a video of her and her boyfriend that had been secretly recorded in her bedroom without their knowledge. She published the threat and, undaunted, continued her investigations.

A week later the video was released on a website designed to look like that of an opposition party; the actual party disavowed it and said they had no idea who had posted it.

Ismayilova says the MNS campaign to discredit and intimidate her has continued. On Feb. 17, 2014, in response to a media campaign that accused her of being a foreign spy, Ismayilova published the document she had been sent in 2011 about the ministry’s recruitment of Hasanov, after editing it to remove his name and personally identifiable information.

In the Facebook post where she published it, she explained that she could not say that it was authentic. Some users commented on her post that the file had previously been posted, unedited, on the Facebook page of someone nicknamed Mustafa Kozlu.

The following day, Ismayilova was summoned by investigators and accused of leaking state secrets. Since then, prosecutors have searched her computer, email, Facebook and Skype account, and interrogated her five times. Because of comments by other users on her Facebook post, they also took screenshots of Kozlu’s Facebook page, where both the recruitment and rape documents had been published in 2011.

The court has also obtained a letter from MNS stating that she published both files in 2011, then deleted them. Although she is accused of leaking state secrets, the letter somewhat confusingly said that the documents were forged.

In late September of this year, while she was in Strasbourg attending a session of the Parliamentary Assembly of the Council of Europe, Ismayilova was warned that she could be arrested upon her return to Azerbaijan. She was also told that Hasanov had opened a case against her. The preliminary hearing was scheduled for Oct. 3, hours before she would be back in the country.

Despite this threat of arrest, Ismayilova was undeterred. “I believe they want me either not to go back to Azerbaijan or to be scared and not be loud about things in Azerbaijan,” she told Radio Free Europe/Radio Liberty. “They have to understand that this is not the way to deal with me.”

After her flight arrived in Baku early in the morning of Oct. 4, Ismayilova was held for five hours before being allowed into the country. The preliminary hearing had been held without her. The Chief Prosecutor’s office has now invoked a travel ban on her, saying she is a witness in a criminal case and cannot leave.