Drug hits and gang shootouts are fueling fears the criminal pact that has lowered violence in Colombia's second city, Medellin, to historic levels could be expiring.

In recent weeks, there has been a string of firefights and assassinations in Medellin that have left several people dead in some of the most open criminal confrontations since the city's rival criminal organizations, the Oficina de Envigado and the Urabeños, agreed to a ceasefire last year. 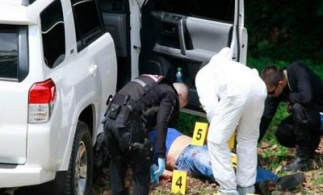 Alias "Pichi Calvo" was murdered in a parking lot

The violence has been focused in Comunas (districts) 4 and 5 in the northern zone of the city, which are home to some of the most powerful local criminal organizations.

On June 12, assassins murdered Wílmar Alexis Metaute Zapata, alias "Pichi Calvo" a high ranking leader of the city's Oficina de Envigado mafia with ties to that part of the city.

Just days before, police captured another senior member of the Oficina de Envigado, Didier de Jesus Rios Lopez, alias "Tuto," in the same zone. Rios is believed to head "La Union," one of the mid-sized criminal organizations known as "oficinas de cobro" -- debt collection offices -- that together make up the Oficina de Envigado. Police say he played a central role in brokering the truce with the Urabeños.

Both men have also been connected to criminal activities in the southern Comuna 15 zone.

In 2013, the Oficina de Envigado and the Urabeños struck a deal to end their costly war for the city, agreeing to put a stop to hostilities, accept territorial boundaries and look to cooperate on criminal activities.

The impact was almost immediate, with the Medellin murder rate plummeting to lows not seen since the rise of Pablo Escobar.

However, there have been growing signs the peace is not durable. The part of Medellin currently the focus of much of the violence was one of the first to see violations of the ceasefire and has been unstable since the start of the year.

Tensions are not limited to that area. Sources on the ground in other conflict hotspots in the city have told InSight Crime that the peace between the gangs has begun to break down and that residents in disputed territories are bracing themselves for renewed fighting.