Azerbaijan's state-owned energy company, SOCAR, likes Turkey’s Tekfen Construction and Installation building company so much, it tried to buy into it in 2008. 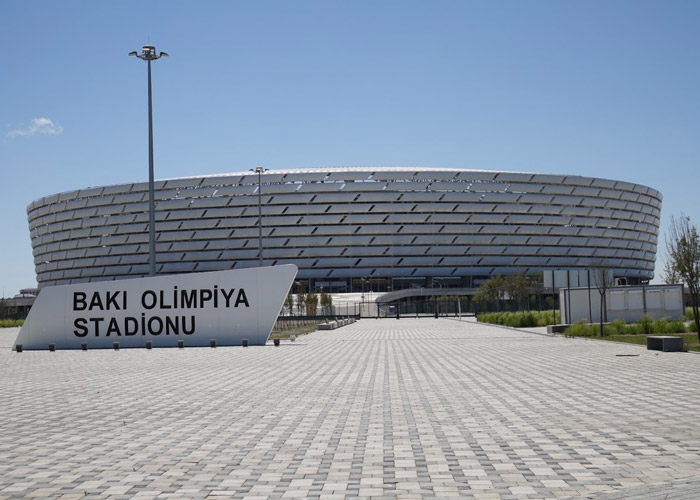 Construction on Baku Olympic Stadium was classified by the government as an urgent project, so single-source procurement was allowed. (Photo Credit: OCCRP)

But that move was blocked by the global financial crisis that started in 2008.  So SOCAR found another way to work closely with Tekfen, sending about US$ 2 billion worth of no-bid contracts Tekfen’s way since 2009.

Critics say the partnership thrives despite the fact that some of the projects involved have missed deadlines or run far over budget.

Tekfen was created more than 60 years ago by three Turkish engineers, two of whom are still alive and in their 90s. The families of the three founders still hold 56 percent of the shares, while the rest of the shareholders are not identified.

One key to the ongoing partnership with SOCAR is Azfen Joint Venture, a company formed in 1996 and jointly owned and operated by SOCAR and Tekfen; Azfen is owned 60 percent by SOCAR and 40 percent by Tekfen.

Azfen has won a number of lucrative building contracts, which in effect means state-owned SOCAR has been awarding tenders to its own business partner.

At the same time, Tekfen by itself continues to win the biggest construction contracts in Azerbaijan, even though several of these projects have blown through deadlines and gone way over budget.

The partnership has worked out well for Azfen, which has won praise from SOCAR for the quality of its work. The company continues to grow, with total assets more than doubling from 124 million manats (US$ 82 million) in 2014 to 258 million manats (US$ 170 million) in 2015. (These are current exchange rates. The manat has lost about half of its value against the dollar since January 2015).

In addition to the Azfen projects, Tekfen Construction does very well on its own in Azerbaijan. Since 2009, it has landed Azerbaijani contracts worth more than US$ 2 billion with no visible bidding processes.

The most notable of these projects have badly missed completion deadlines and costs have skyrocketed. This spending has continued despite the currency devaluations.

The list of projects given to Tekfen in Azerbaijan includes:

On Nov. 15, 2011, Azerbaijan’s Cabinet of Ministers issued Order 370s.  The ministers took note of upcoming events including a Congress of European Azerbaijanis, an international music festival, and the 2012 Eurovision Song Contest.

“Taking into consideration the importance of international events which will be held in our country in 2012, as an exceptional case, the works which showed in the 2nd part of this order (reasonable proposals) can be done by a single source procurement method,” the order states.

Natig Jafarli is an economist and Executive Secretary of the Board of the Republican Alternative Movement, an Azerbaijan political organization. “In fact, it’s a violation of the law,” Jafarli wrote in an email message. “That decision opened the door for some projects to be awarded that didn't follow the laws on public procurement and tenders.”

All the above-mentioned events were scheduled years in advance, and critics say there was no emergency to justify suspending the rules on tenders.

“Although the law on Public Procurements explains the situations in which tenders need not be held, the Cabinet of Ministers must confirm the decision,” wrote attorney Muzaffar Bakhishov in an email message.  “If there is an urgent case, they have to prove it. What justified the urgent need in this case? How long will construction take? Perhaps there wasn’t a need for such a ruling. This article of the law can be used as an excuse for not conducting a tender.”

Back in 2008, SOCAR had planned to invest directly in Tekfen. It signed a contract to acquire 50 percent of the shares in Tekfen Construction and Installation, a wholly owned subsidiary of the Turkish conglomerate Tekfen Holding, which was first created by the three engineers in 1956. 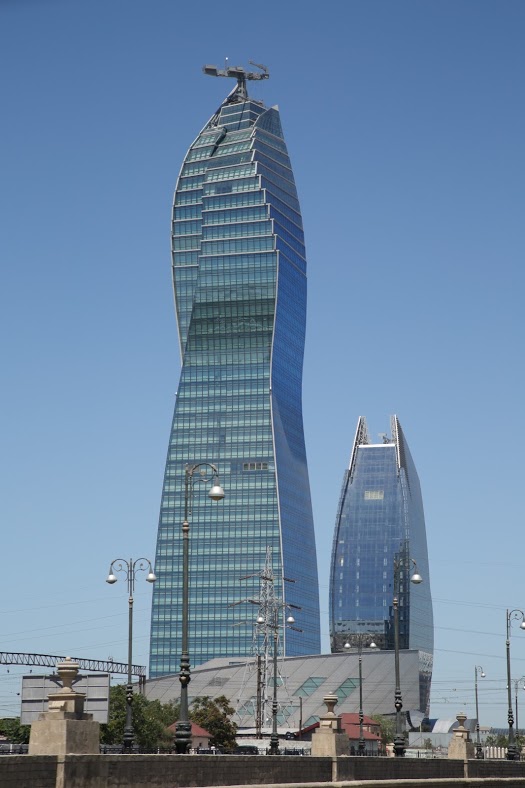 The SOCAR Tower was officially opened on May 30, three years after its original completion deadline. (Photo Credit: OCCRP)Also in 2008, Mubariz Mansimov, president of the Turkish-based shipping giant Palmali Group, told CNBC Business Magazine that Palmali would pay SOCAR US$ 520 million and the two companies would each hold 50 percent of the shares in Tekfen Construction.

The global financial crisis of 2008-09 was given as the reason neither of these deals were concluded. But Tekfen's own contracts in Azerbaijan began multiplying quickly after 2009.

Before 2009, Tekfen Construction's projects in Azerbaijan were mostly related to the oil and gas sector. But after 2009, Tekfen began working on multi-million-dollar non-energy projects, including the 42-story SOCAR Tower in Baku and changes and upgrades to the plans for building Baku Olympic Stadium, which were made as Azerbaijan applied and was selected to host the 2015 European Games.

The SOCAR Tower and Baku Stadium projects are both suffering major cost overruns.  The corporate tower for the state-owned oil company was supposed to be completed in 2013 at a cost of US$ 235 million.  Finally opened on May 30, 2016, the current estimated price tag is at least US$ 385 million.

The cost for Baku Stadium has grown from US$ 640 million to at least US$ 850 million. Neither Azerbaijani budget documents nor SOCAR financial reports show where this money is coming from.

SOCAR officially selected Tekfen as the construction company for the SOCAR Tower in March 2010. But back in 2008, Turkish media was already reporting that Tekfen had been selected to build the tower.

For the 65,000-seat Baku Stadium, the Azerbaijan Ministry of Youth and Sports is the client, SOCAR is the contractor and Tekfen Construction is the sub-contractor.

There were no tenders for the stadium project. The ministry awarded the contract to SOCAR based on the exception to the Law on State Procurements article that lists "terms of application for single-source procurement method" which states that tenders are not required in urgent situations.

It's again hard to argue that the stadium upgrade was an urgent situation. The project planning began in 2006, and reconstruction work began in 2011. Not all of the proposed work was completed before the European Games were held in June of 2015. 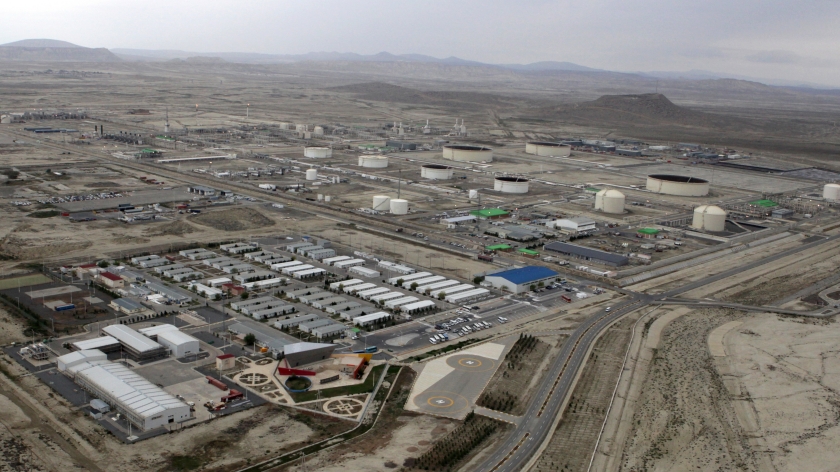 Azfen, a joint venture of Tekfen and SOCAR, has been awarded several large contracts including the expansion of the Sangachal Terminal, which processes Caspian Sea oil and gas.In another case where state-owned SOCAR appears to be awarding contracts to itself, a longtime SOCAR associate and Tekfen have created South Construction Service JSC, which provides living accommodations in Azerbaijan for hundreds of SOCAR and Tekfen employees.

Tekfen International Finance, a wholly-controlled subsidiary of Tekfen Holding, controls 51 percent of the shares in this company. Trans Marine United Corporation, which holds 45.7 percent, is controlled by Anar Aliyev. A 2013 Global Witness report connected Aliyev with at least 48 SOCAR companies and claimed that Aliyev is related to SOCAR president Rovnag Abdullayev.

According to records of a 2014 shareholders meeting, South Construction Service charges US$ 20 per day for each employee. The company housed 765 employees in 2014 and about 500 in 2015. In effect, Tekfen and Trans Marine are paying the rent to themselves.

According to SOCAR regulations, paragraph 2.3, SOCAR carries out implementation of joint projects related to its particular duties, including attraction of necessary investments, up-to-date technology and equipment, and improvement of services either with (joint ventures) or without (alliances) establishment of legal entities.

The story has been changed to add additional context.

This story has been corrected to reflect the proper date of the European Games held in Baku.