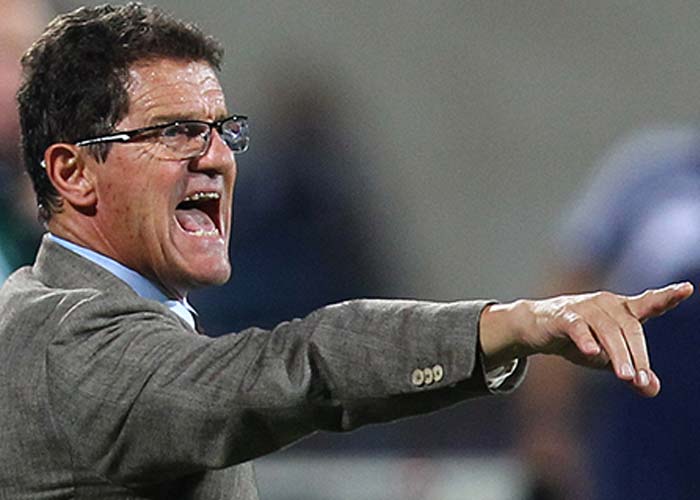 (RFU Photo) When 68-year-old Italian football coach Fabio Capello took charge of the Russian national team in 2012, expectations for the famous coach were as high as his salary.

Three years later, the team has performed poorly, the coach went months without getting paid because of economic turmoil, and there are questions now related to a new € 7 million (US$ 8 million) extension that runs through 2018, when Russia is to host the World Cup.

Documents uncovered by OCCRP reporters working with Novaya Gazeta reveal that on the same day Capello signed his extension, an additional contract was signed in Capello’s name between two murky offshore companies, one of which is linked to a massive money-laundering scandal.

Capello and representatives of the Football Union of Russia (RFU) say they know nothing about the additional contract. The revelations have led to calls for an investigation by members of the Russian Duma into what deals were really being made and who might be benefitting.

Pierfilippo Capello, the coach’s son and lawyer, said he has no idea why his father’s name even appears in this mysterious side contract, although it is allegedly for consulting services to be provided to the elder Capello.

Capello’s tenure in Russia has been controversial almost from the beginning.  Despite his long track record of successfully managing teams, under his direction the Russian national football team performed badly, getting eliminated from the World Cup in Brazil in the first round.  One member of the Duma called Capello a thief for charging so much and delivering so little.

Then, in late 2014 as the Russian ruble tanked due to a drop in oil prices and sanctions against the country, reports surfaced that the coach hadn’t been paid in six months. RFU officials admitted they didn’t have the money to pay Capello although he was paid shortly after the matter became public thanks to loan to the RFU from the well-known oligarch Alisher Usmanov.

Those involved can’t even agree who ordered the extension.  In interviews with the Russian media, Nikolai Tolstykh, the head of the RFU, said he would have never signed the new agreement with the Italian coach if the payments hadn’t been guaranteed by the people who invited Capello.

The minister of sports, Vitaly Mutko, the man who invited Capello to Russia, said that it was the responsibility of the RFU.

OCCRP and Novaya Gazeta obtained copies of Capello’s new contract along with other documents which may indicate secret deals within Russian football.

Capello’s extension, signed Jan. 24, 2014 with the RFU, gives him an annual salary of € 7 million (about US$ 8 million) plus incentives linked to the team’s performance. For instance, Capello was paid € 2 million (about US$ 2.3 million) for qualifying for the 2014 FIFA World Cup in Brazil; if the team qualifies for the UEFA EURO 2016 in France, Capello will be paid € 1 million  (US$ 1.1 million). 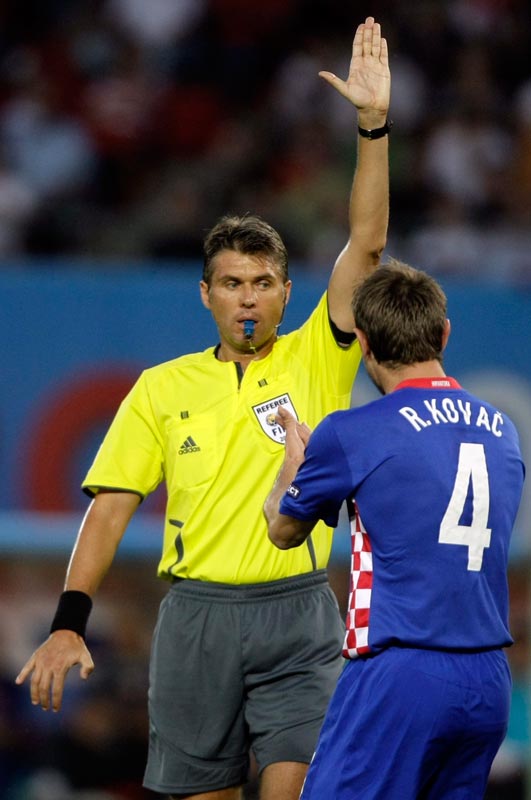 (AP Photo/Frank Augstein) On the same day that Capello signed his new contract with the RFU, his name appeared in another contract, signed between two companies – UK-based Chestersen Ltd. and a firm from Monaco called Faro Management Ltd.

The contract spells out that Chestersen will hire Faro Management as a consultant for work including marketing and advertising services “for Mr. Fabio Capello”. The agreement also includes a payment schedule for a consultant’s fee totaling € 10 million (US$ 11.2 million) from 2014 till 2018. Under the contract, as of April 2015, Faro Management is to have received € 2.5 million (US$ 2.8 million) from Chestersen.

Chestersen is represented in the agreement by a woman named E. G. Egorova. Her full name was not disclosed and OCCRP was unable to find anyone by that name. Faro Management in its turn was represented by Stefano Ciglia, a senior vice president of the EFG Investment Bank in Monaco.

Capello’s son and attorney, Pierfilippo Capello, denied any connection between his father and companies in the contract. “I assure you that Fabio Capello has not been represented by anyone except me, his lawyer. My father has never dealt with or heard about these companies,” the younger Capello said.

“Fabio Capello’s contract is at the levels of Ancelotti, Guardiola, Mourinho and van Gaal,” he said. “He has one of the best and most beautiful contracts that have recently been signed; he has earned enough money, so as to not worry about anything. He pays taxes where he has to -- in Russia the tax rate is 13 percent. When you have such a tax rate, why should you hide the money?”

Chestersen Ltd. was established in London in 2006.   According to the agreement with Faro Management, Chestersen held an account in the Latvian bank, Aizkraukles Banka in the capital, Riga.

Until 2012, Juri Vitman acted as the director of Chestersen. Vitman is an ex-employee of the Latvia-based Parex Bank and, together with two infamous fronts for corrupt companies named Erik Vanagels and Stan Gorin, acted as a proxy in the “Proxy Platform,” a massive money-laundering operation identified by OCCRP in 2011.

The Proxy Platform was a set of offshore companies which provided money-laundering services for criminals all over the world including Mexican drug cartels, Asian Triads, Russian and Moldovan organized crime and state companies and officials in Russia and Ukraine during the reign of Viktor Yanukovych.  Some of the money stolen from the Russian treasury in the Sergey Magnitsky case used the Proxy Platform.

In 2012, Vitman was replaced at Chestersen by Youngsam Kim of Seoul, South Korea, and a company from Hong-Kong, Transhold Corporation Ltd. Reporters contacted Kim’s eldest brother in Korea, who said Youngsam Kim currently lives and conducts business in Lithuania. Youngsam Kim’s brother said that he doesn’t know any details of that business and refused to share his brother’s contacts with OCCRP.

An agent for a referee

Evgeny Dzichkovskiy, a press officer for the RFU, told OCCRP that the contract between Fabio Capello and RFU was signed without any intermediaries and that RFU has no knowledge of Capello’s relationships with Chestersen or Faro Management.

OCCRP has discovered, however, that Faro Management has acted on the RFU’s behalf in the past. According to an agreement dated April 6, 2011, the RFU hired Faro Management to sign a contract with Roberto Rosetti, a well-known referee from Italy.

Rosetti  became the head of the Referee’s Department of the RFU at a salary of €1 million (US$ 1.1 million) per year. The RFU was headed at the time by Sergey Fursenko, a close associate of Russian President Vladimir Putin. Faro Management, according to a banking statement reviewed by OCCRP, earned € 200,000 (US$ 224,000) as a consultant fee in the deal. 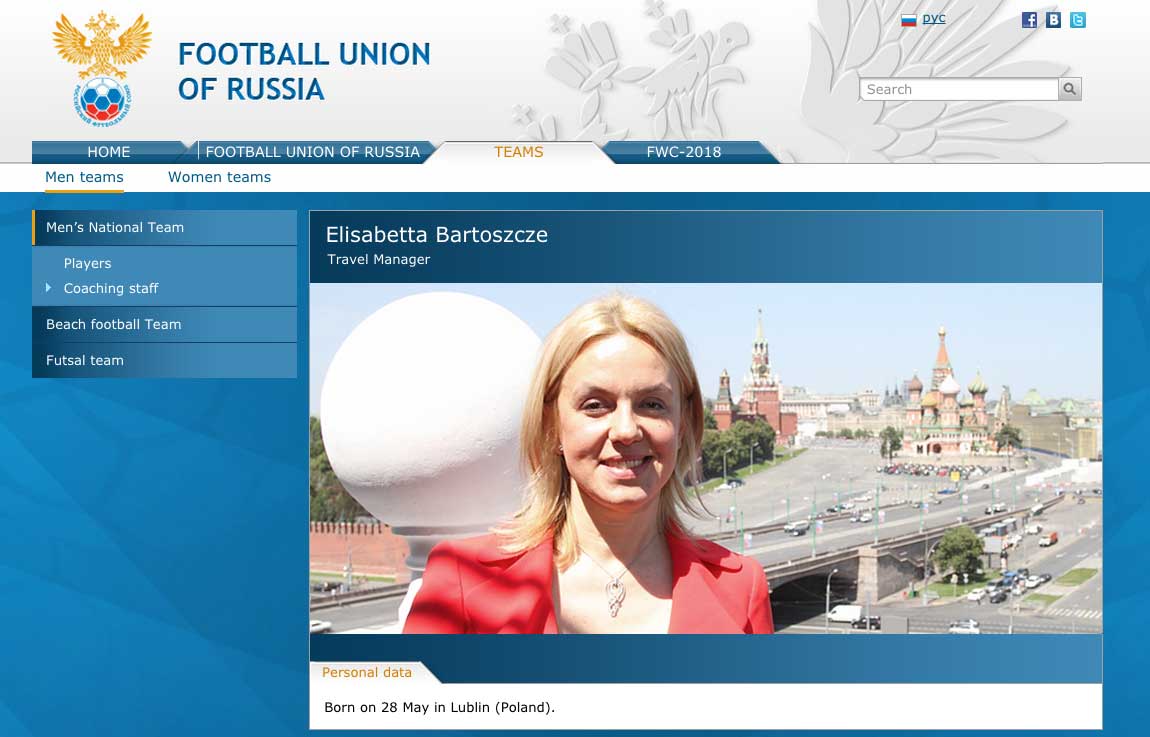 RFU’s spokesman Dzichkovsky confirmed to OCCRP that in September 2011, the RFU paid Faro Management for Elisabetta Bartoszcze’s help in bringing Rosetti to the RFU.

Bartoszcze, who served as director of Faro Management in 2011,  is a well-connected person in Russian football. She is the director of Larus Sport, a company which provides exclusive travel services to the RFU.

Reached by OCCRP reporters, Rosetti said he had never heard of Faro Management.

"It is the first time that I hear of such company," the former referee told OCCRP reporters

Bartoszcze also played a key role in the 2012 negotiations with Capello. According to Capello’s statements to Russian media, she was acting on behalf of the Minister of Sports, Vitaly Mutko.

“I received a call from Elisabetta Bartoszcze, who has a long-time relationship with RFU. She said that the minister [Mutko] wants to see me in Moscow. I came to Russia early in the morning. I didn’t even have a visa; it was made directly at the airport. That’s how everything happened in reality. The story is simple.”Capello told Sportbox.ru

Bartoszcze initially denied knowing Faro Management, but when OCCRP sent her a copy of the 2011 contract with her signature, she refused to comment. In a second telephone interview she referred all questions to the RFU.

Fabio Capello’s son, Pierfilippo, said he is acquainted with Bartoszcze, because she speaks Italian and has long-term relationships with RFU. But he insisted that Bartoszcze never worked for his father and has never represented his interests.

Even before the revelations about the side contract, Capello’s main contract has been criticized by both Russian officials and experts from the football world for providing lucrative bonuses without specifying many responsibilities for the coach.

One severe critic was Sergey Stepashin, a member of RFU’s executive committee who previously served as the head of the Audit Chamber of Russia, as the head of the Ministry of Internal Affairs and the director of the Federal Security Service (FSB).

“Who signs such contracts? Without any obligations? …  I’ll tell you directly: if that had happened in another organization, a criminal case would have been started,” Stepashin told the Russian newspaper Sport-Express.

Another RFU member also called the contract unfair. “This document doesn’t even look like a contract, it looks like a bill, which RFU will be obliged to pay no matter what the case,” said Vasily Grishak, a lawyer and member of several RFU committees.

Grishak claims contracts of previous coaches of the national team did not have such provisions.

The contract was signed by the head of the RFU, Nikolai Tolstykh and Minister of Sports Vitaly Mutko.  Mutko’s spokesperson refused to comment for this article, referring all questions to the RFU.

Rosetti contacted OCCRP and said that his yearly salary was a smaller figure.