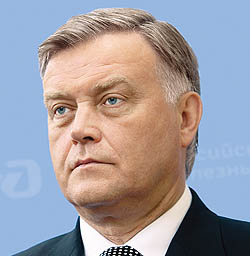 The president of Russian Railways may run a state-owned company but he enjoys a posh dacha in suburban Moscow owned by companies set up in Cyprus and Panama by people with connections to him.

A few lines posted earlier this month on a popular Russian online forum saying the president of the Russian Railways owns a chunk of land with a luxurious dacha on it, in a posh suburban area of Moscow ignited a heated discussion in the Russian blogosphere.

The post prompted Russian blogger Alexei Navalny to follow up, and he published a document identifying rail president Vladimir Yakunin as the former owner of the same plot where the dacha is situated. The document, retrieved from the Federal Service for State Registration, Cadastral Records and Cartography, showed that Yakunin owned the land from 2007 to 2011. Beginning in February 2011, a nested structure of offshore Cyprus and Panamanian replaced him as the landowner.

OCCRP partner Novaya Gazeta took up the story from there to find out who the new owners are. The paper found a series of connections between Yakunin's family and the offshore companies that took over the property.

The 70,000-square-meter plot the country house stands on is located in one of the most popular areas of the Moscow suburbs, in the village of Akulinino. According to similar listings from real estate agencies that work in the area, the price of 100 square meters of land near Akulinino starts at $3,000, putting the current value of the plot at more than $2 million. Based on information from persons familiar with construction expenses, it could cost tens of millions of dollars to build such a structure given the size of the dacha, the infrastructure and the expensive decorative work.

According to land records, the current land owner is the Cyprus-based company Mirolo Investments Ltd. The company obtained the rights to the plot Feb. 25, 2011, the same day Yakunin officially ceased to be its owner.

According to documents from the Cyprus registry of companies, Mirolo Investments is owned by the Panama-based Skiron Holdings S.A.. The trail goes cold in Panama as Skiron Holdings is owned by proxies -- designated shareholders who serve to obscure the real ownership of a company. However, multiple searches through the Russian registrar of commercial enterprises revealed that the Mirolo Investments is connected to the Yakunin family. 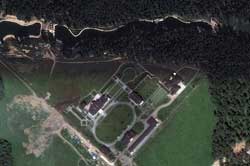 Photo of dacha from space.

It owns a company in the Russian city of St. Petersburg called Akulinino.  Akulinino shares the same address and phone number as a representative office of Venture Investments & Yield Management (VIYM). And VIYM was founded in London by Yakunin's son, Andrei Yakunin.  VIYM is an independent partnership specializing in private equity investments in Russia and the CIS. Andrei Yakunin is a co-owner. That is not the only overlap with the railway head.

Bashkov and Andrei Yakunin have known each other for a long time. In 2001 Bashkov headed the legal department of the largest hotel in St. Petersburg, the Pribaltiyskaya, and Andrei Yakunin was the hotel's general director. When the younger Yakunin started VIYM, Bashkov went to work there.

Viktor Yakunin worked at VIY Management until at least May 2012, running the company's St. Petersburg office. This is mentioned in a 2011 annual report of a different Russian company, where Viktor Yakunin was listed as a member of the board of directors.

OCCRP and Novaya Gazeta were unable to reach Sergey Bashkov for comment. VIYM said he was away on a business trip.

No other company official wanted to comment. The Railroads refused comment on a story that does not deal with the company itself. Vladimir Yakunin didn't respond to questions sent in a letter to his office.

But a person close to him told Novaya Gazeta that Yakunin bought the land in 2006 using money he said he saved in the mid-90s and from a loan from Transcreditbank.  OCCRP could not confirm or refute this information.  According to the source, Yakunin began building the dacha in 2007 but three years later changed his mind and sold it at an undisclosed price. The source did not comment on the evidence that the companies who bought it were connected to his sons.