Betting on a Sure Thing
At Home BiH Footballers Dont Lose

Of the 26 current and former coaches of teams in the Bosnia and Herzegovina (BiH) Premier League that were interviewed by reporters from the Center for Investigative Reporting in Sarajevo (CIN) over the past several months, 24 said they considered league competition rigged in ways that led to such predictable results that fans had lost interest in following their teams.

Alispahić: “People who have nothing to do with sports are employed in the clubs, people who heed only their own interests and will not allow for young educated people to come.”

The coaches said they based their opinions about rigged games on indicators such as the high rate of home wins and away losses, on bad or questionable refereeing and on unprofessional leadership of the clubs and the BiH Football Association.

“It all begins with the association’s people,” said Avdo Kalajdžić, until recently a coach of Mostar’s Velež club. “The association’s folks are not right, and that is reflected in the clubs. There is no systematic competition to put the league on a solid footing.” 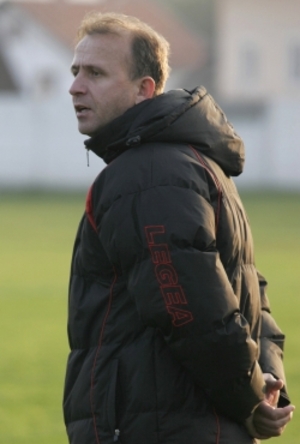 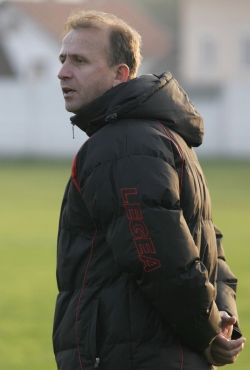 Coaches said that what has become a predictable pattern of wins at home and losses away indicates poor, even dishonest refereeing and a willingness by at least some clubs to rig games to maintain their place in the Premier League or to qualify for European competitions. 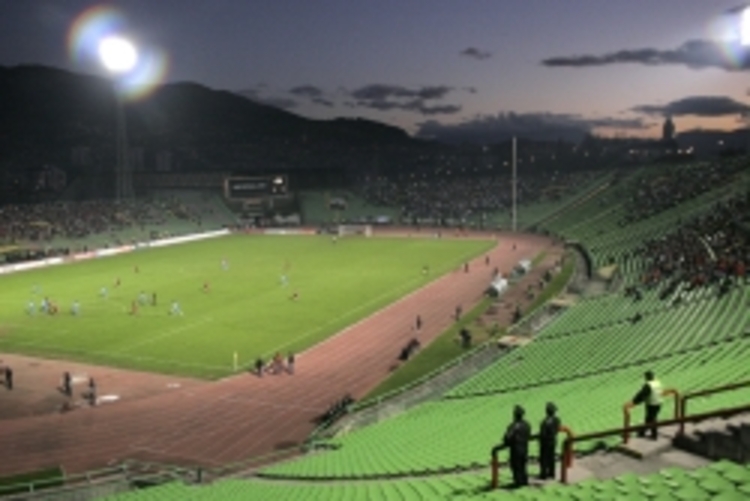 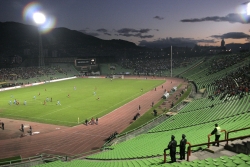 Credit: CIN It used to be the most exciting match of the season, but recently the local derby between FC Sarajevo and FC Željezničar has not attracted enough spectators to fill a stadium.

“If the visiting team cannot take home some points, the competition is not as it should be. That means either that the pressure from the home team has been overwhelming or that the refereeing was not fair,” said Ivo Knežević, former coach of Orašje and the national U19 team.

Other coaches are also resigned. 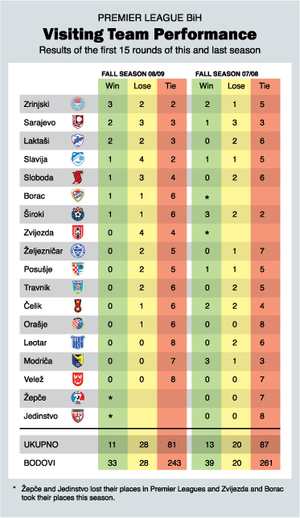 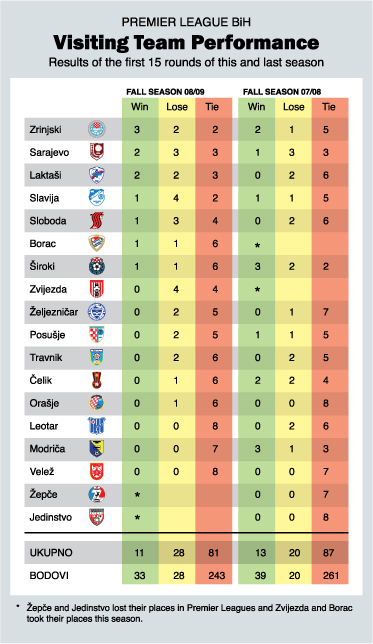 “In the corrupt society we live in, not even football is without corruption. I think our league is unbelievable – at the start of the season, there are already speculations, people know which teams will be promoted into the league and which teams will be relegated. I think this has also affected attendance, which is really low,” said Mehmed Janjoš, new Sarajevo club coach, who has coached teams in Kuwait and Turkey.

Statistics underscore complaints about predictable results. In the 2007-2008 season, for example, visiting teams won only 25 of 240 matches (10.41 percent). Of those 25 visiting wins, 12 were against the last place team – Žepče, which lost a place in the Premier League after only two wins and a tie at home.

Many coaches said referees are responsible for game results, and one man who has gotten a “gift” from winning teams agrees that referees sometimes cave in to pressure.

Midhat Čorbo, who was a Premier League referee, said, “No one knows what it’s like …when, say, a home team is losing. The local players are pressuring and the whole bench and club officials are pressuring. The fans … are turning on the heat: spitting, cursing…simply, they are accustomed to expecting help and that you’ve got to help the home team.”

Čorbo said, “If someone offers 5.000 to 6,000 KM, it is hard to resist and not help the club.” He said he found himself in a situation where a club gave him 500 KM after a match, though he said he did not throw it. 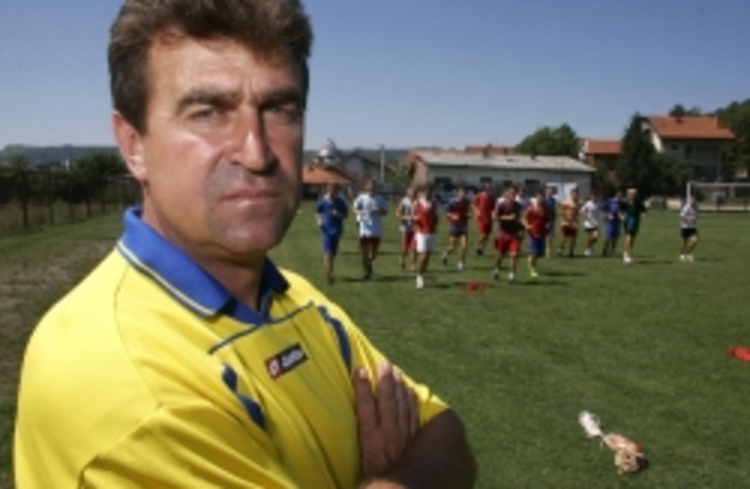 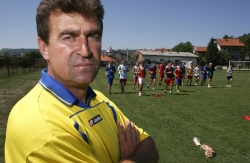 Credit: CIN He was not the oldest referee, and he did not have the worst rating, but Midhat Čorbo was taken off the referee list in 2004 after he talked about irregularities in the BiH Football Association.

Coaches acknowledged that they, too, share in the blame for this. 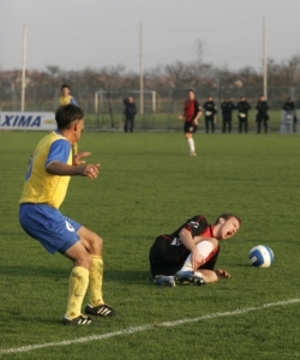 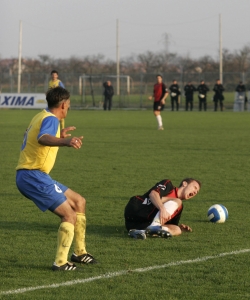 Credit: CIN Many coaches say football players give up psychologically before play even begins in away games because visitors win so seldom in BiH.

Kemal Hafizović who coached a number of Premier League clubs said, “We are all part of this because the clubs pursue referees. You’ll never get a phone call from a referee saying ‘Give me that much, I’ll referee in your [favor].’” He said too many club leaders wanted to look good despite poor teams, and pressure referees to get better results.

Kalajdžić said that the “3 for 3” scheme is one of the reasons behind predictable results. Clubs agree to lose on each other’s home turf in return for winning at home, guaranteeing three points to each club in the two matches between them. Clubs do this to assure that they have enough points to remain in the Premier League.

Miroslav Ćorić and Hamdija “Tigar” Abdić, former and current members, respectively, of the BiH Association’s executive board, said there was some truth to reports about irregularities and the “3 for 3” schemes. Abdić, former president of the Bihać club Jedinstvo, said he has been contacted by other clubs about arranging an exchange of points.

Some coaches said the predictability of losing games away from home has a psychological effect on players, who give up one they know they can’t win.

Srđan Bajić, Leotar’s coach, said some players claim injuries or try to get a yellow card at home to get out of playing in away games. 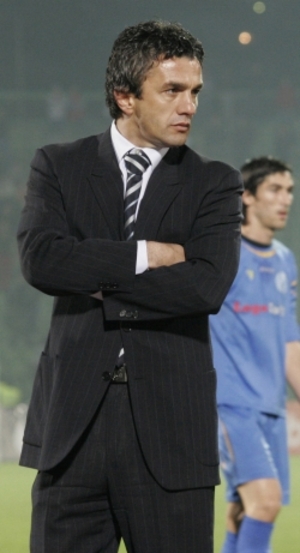 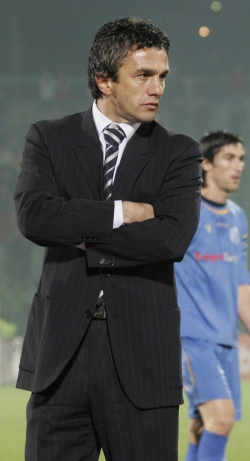 Credit: CIN Even though Željezničar Coach Simo Krunić said guests are doing better at games this season, the last away game his team won was May 23, 2007.

Some coaches disagreed that results were too predictable, saying this season’s results have been less so. The coach of Željezničar, Simo Krunić, said the situation had improved.

Statistics say otherwise. This season stacks up much like last year’s. Comparing the first 15 rounds of the two seasons, this year visiting teams won two fewer games than last. As in last year’s season, nine teams have not won a single away game.

All this weakens the league, the coaches said.

“The Premier League is very weak. Year after year it gets weaker,” said Kemal Alispahić, coach of the Bihać’s Jedinstvo in the 1st league of Federation BiH. “I don’t mean only the players, but in general, the organization itself. I think that from one year to another we do nothing to raise it to another level.”

Only two coaches – Dragan Jović of top-ranked Zrinjski from Mostar and Zoran Erbez of second-ranked Slavija from East Sarajevo – said the quality of the Bosnian league is not so poor and has shown improvement.

The others said quality is being hurt by lack of money and investment.

Ivo Ištuk, sports director of Čelik from Zenica, who coached Brotnjo from Čitluk and Široki Brijeg when they were BiH champions, said the problem lies in the organization of BiH football. “Clubs are still citizens’ associations; they practically belong to no one. This is where all other problems stem from. It is highly unlikely someone would be willing to invest in a club, build the infrastructure, stadiums, fields and the rest. Without this, there can be no progress.”

Without someone willing and able to build a club and furnish resources, players face poor fields, insufficient training and meager incomes. Because of these poor conditions, many leave BiH as soon as they get a chance, and thus deprive the league of some of its best football players.

Knežević said that talented young players leave the Premiere League and older, less talented players, often from Serbia and Croatia, sign on in their place.

The high turnover means players do not have enough time to come together as a team, said Milomir Odović, who has coached several Premier League teams.

This was evident in Sarajevo’s Željezničar club, said Kemal Alispahić, a former coach. In 2003, Željezničar won both games in the trial matches for the Union of European Football Associations (UEFA) Cup against Anorthosis from Cyprus. This season, Anorthosis is in the second place in the Cyprus championships and competed in the group stage of the UEFA Champions League. Željezničar ranks only eighth in BiH’s Premiere League and has not played any European competitions since 2004. 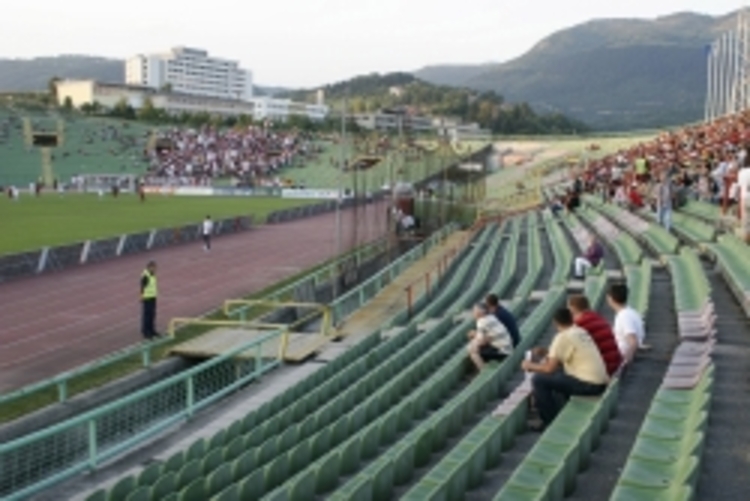 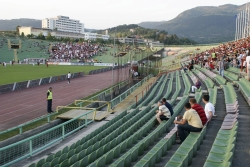 Credit: CIN Play in the Premiere League is affected by poorly maintained fields and stadiums, a drain of young and talented players, inadequate training, and bad refereeing. 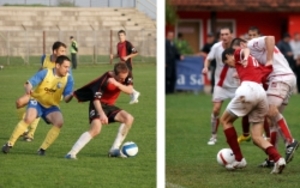 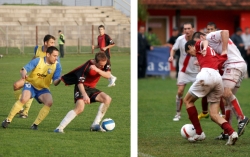 Credit: CIN Images from BiH football fields - players will do anything to stop opponents.

Alispahić blames the club, league and association leaders for not providing resources and training opportunities. “People who have nothing to do with sports are employed in the clubs, people who heed only their own interests and will not allow for young educated people to come,” he said. The clubs need marketing specialists to help make them more financially sound, he said.

BiH’s Premier League was ranked 99th in the world in 2007, according to the annual list of the International Federation of Football History and Statistics (IFFHS). The IFFHS publishes its rankings of the top 100 leagues, and only Azerbaijan places lower than BiH. 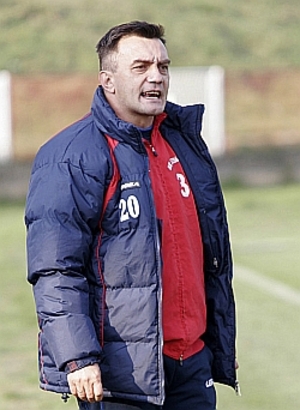 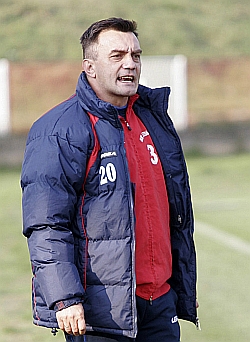 Credit: CIN Gradačac's Zvijezda club Coach Ratko Ninković says that Premiere League games are poor and that this will not improve until no one is left in the stands except for players' families and football club employees.

All of the ex-Yugoslav leagues, aside from Montenegro’s, as well as leagues in Zimbabwe, Guatemala, Albania and Kazakhstan, are ranked ahead of BiH’s. The rankings are based on the results of a country’s five best teams in competitions at home and abroad. BiH’s league has not always ranked so low, but over the years has continued to spiral downward, from 76th in 2004, to 91st in 2005, to 92nd in 2006.

The IFFHS Club World Ranking for the past 12 months listed the Premier League among the group of weakest leagues. None of its clubs ranked within the top 350. The three highest ranked were Zrinjski (421), Modriča (654) and Široki Brijeg (687).

Such rankings, along with predictable outcomes, have resulted in the loss of fans, said coaches. “Well, let’s face it, who’d watch all that, most of those games?” said Ratko Ninković, coach of the Zvijezda club from Gradačac.

Vahidin “Vaha” Alihodžić, a veteran sports reporter, said he has stopped visiting BiH stadiums except for when his job demands it. “I’d rather spend those couple of hours at a picnic with my family or stay in and see a good game on TV,” he said.

Široki Brijeg’s Ivo Ištuk said, “I think that we have many more fans than we deserve at the moment. We cannot expect people to come and watch poorly played, phony football.”