France: Qatari Charged With Bribery In Bid To Host Championship

French prosecutors filed bribery charges against Yousef al-Obaidly, a Qatari media executive, this week for what they say was an attempt to bring the World Track and Field Championships to Qatar. 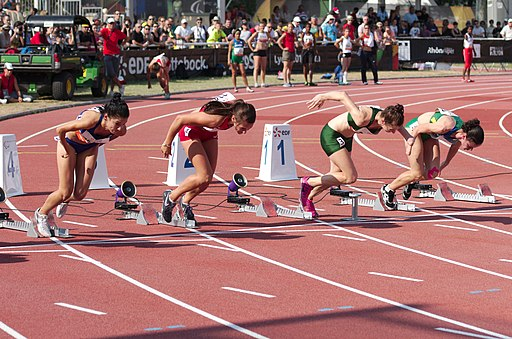 Women's 100m race (Photo by Clément Bucco-Lechat CC BY-SA 3.0)Prosecutors connect him to an affair revealed in 2016 by Le Monde newspaper which obtained records showing that US$3.5 million was paid by a Qatari investment fund to a company owned by Papa Massata Diack, the son of the President of the International Association of Athletics (IAAF), Lamine Diack.

Lamine Diack is currently on house arrest after charges were filed against him on Monday in France. Senegalese government officials have reportedly denied extradition requests.

“Under the leadership of its president and over the course of several years of wrongdoing, the IAAF managed to combine corruption with the encouragement of doping,” the prosecutors wrote in the indictment.

Diack has been investigated for several doping scandals, in which he took bribes from Russia to cover up athletes’ use of performance enhancing drugs.

The alleged bribe-giver, Al-Obaidly, is the CEO of multi-billion dollar beIN media group, which owns sports channels throughout the world and the US-based film company Miramax.

“The allegations raised are not only utterly baseless and unsubstantiated, but they have been — quite remarkably — leaked to the media. For the avoidance of any doubt whatsoever, the allegations are completely and categorically denied and will be vehemently challenged using the full force of the law,” al-Obaidly said in a public statement.

Qatar will host the Track and Field Championships this fall, failing to secure the bid for the 2017 event. They will also host the World Cup in 2022, a choice that FIFA officials came under fire for.