Journalist Khadija Ismayilova will be able to appeal her imprisonment decision in a Supreme Court of Azerbaijan hearing on May 25, according to Trend News Agency. This is the final appeal in the Azerbaijani Court system. If she is unsuccessful the next step would be to take the case to the European courts. 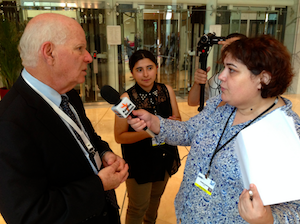 Khadija Ismayilova (Photo Credit: Flickr)She was sentenced to 7.5 years in prison last September by the Baku Court of Grave Crimes on charges relating to large-scale misappropriation and embezzlement, illegal entrepreneurship, tax evasion and abuse of official duties. Many say that her arrest was politically motivated due to her journalistic activities.Ismayilova, an award-winning reporter whoexposed the corruption of the ruling Aliyev family, has been in prison in Baku since her arrest on Dec. 5, 2014.

Her lawyers filed the appeal after the Baku Court of Appeal upheld her original sentencing. According to her lawyer Fakhraddin Mehdiyev, Ismaiyilova asks to be released from prison in the appeal.

Ismayilova was named the 2016 recipient of the UNESCO/Guillermo Cano World Press Freedom Prize. In a speech read by her mother at the awards ceremony, Ismayilova said that “humanity suffers when journalists are silenced.” She urged those present to not laud her work or courage, but to “dedicate yourself to the work each one of you can do on behalf of press freedom and justice,” Radio Free Europe/Radio Liberty reported.

Journalists in Moldova also protested her imprisonment in front of the Embassy of Azerbaijan in Chisinau in early May. The Moldovan Center for Investigative Journalism said that they faced harassment by an Azerbaijani embassy employee after displaying a #FreeKhadija banner on their office balcony.

The Sport for Rights campaign is working with others to coordinate parallel protests on May 27th to advocate for her release. Their aim is to have 40 protests, in honor of her 40th birthday on the same date, the Index on Censorship wrote.