Spanish authorities closed down three illegal tobacco factories and arrested 27 suspected members of a criminal group that employed Ukrainians who escaped the Russian invasion of their country to produce the cigarettes. 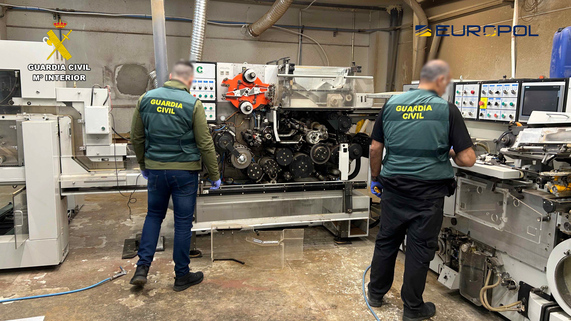 The European Union Law Enforcement Agency, Europol, was also involved in the investigation, as the illegal cigarettes were smuggled from Spain to other European countries, bypassing regular taxation.

The factories were using advanced technology and were able to produce more than 540,000 packs daily, according to police.

The leaders of the criminal ring were also involved in money laundering, which, according to police, helped them maintain their luxurious living standards.

While they were living in high-class residences in the Costa del Sol’s luxury resort Marbella, their workers, mostly Ukrainian refugees, were living “crammed” into prefabricated units within the factories so they could work long hours and were unable to leave the production facilities.

This made them invisible and undetectable to the authorities, as some of them allegedly entered the country illegally.

The investigation started at the end of 2021, when the first illegal tobacco plant was discovered in a poultry shed near Seville. This led to the discovery of the other two facilities.

The criminal organization, as the investigation revealed, was also expanding its illegal businesses, setting up large marijuana plantations.