A Bipartisan US Senate Bill Takes on Illegal Fishing

Democratic and Republican senators crossed the aisle in Washington to introduce a bill aimed to cut down on illegal, unregulated and unlicensed (IUU) fishing. 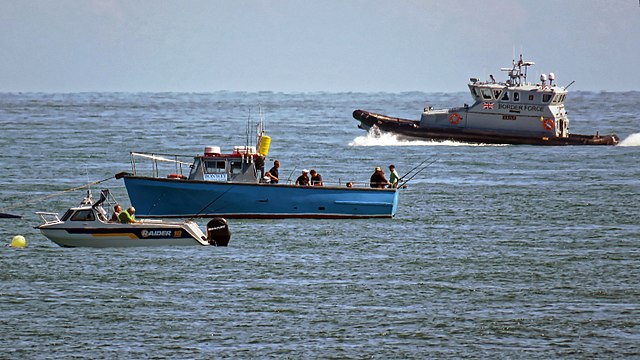 Illegal fishing is believed to account for as much of a fifth of the world's catch. (Photo: Acabashi, Wikimedia, License)The Fighting Foreign Illegal Seafood Harvest (FISH) Act, introduced by Alaska Republican Dan Sullivan, and Rhode Island Democrat Sheldon Whitehouse would blacklist ships caught engaging in the trade, ban them from U.S. ports and waters and provide further funding for the Coast Guard to challenge the trade.

Illegal fishing is believed to account for as much of a fifth of the world's catch, feeding populations the size of entire nations, but is replete with connections to organized crime and causes untold ecological damage.

“Money laundering, labor exploitation, corruption and forgery are a small sample of serious crimes commonly committed during IUU fishing today,” Interpol said in a 2020 report on the extent of the crime.

Earlier this summer, U.S. President Joe Biden released a Memorandum outlining his administration’s dedication to combating the trade. At the same time, he sent his trade representative, Katherine Tai to Alaska to meet with local fishers.

“Alaska is the superpower of seafood, the source of roughly two-thirds of all seafood harvested in the United States,” said Sen. Sullivan in a statement after he introduced the bill. “Our fishery’s extraordinary abundance is the result of responsible stewards who’ve sustainably managed this incredible resource and followed the rules. But not all vessels and countries abide by these rules, ravaging fish stocks without regard for other users or future generations—particularly the worst offender, China.”

China’s distant water fishing fleet – sometimes called the ‘Dark Fleet’ for its habit of turning off AIS tracking systems - is 17,000 ships strong and is the largest in the world. It has been plundering the world’s oceans to feed China's bulging population. The fleet has been caught with numerous cases of forced labor as well as fishing on the edges of protected waters, such as the area around the Galapagos Islands.

“Distant water fishing vessels, which engage in industrial-scale fishing operations on the high seas and in waters under other states’ jurisdictions, can be significant perpetrators of IUU fishing and related harmful fishing practices,” President Biden said, noting that IUU fishing often involves forced labor and other crimes.

Left unchecked, all this undermines the economic competitiveness of the United States as well as its national security, fishery sustainability and the livelihoods and human rights of fishers around the world and threatens to exacerbate the environmental and socioeconomic effects of climate change, Biden said in his July memorandum.

The proposed act would stop those vessels who engage in the trade from doing business with the United States or in U.S. waters. While that may not stop powerhouses like China, it could have a significant effect on smaller scale illegal fishers.