In the hunt for Russian-owned superyachts worldwide, British officials have identified and detained one belonging to a Russian national valued at 38 million pounds (US$50 million). 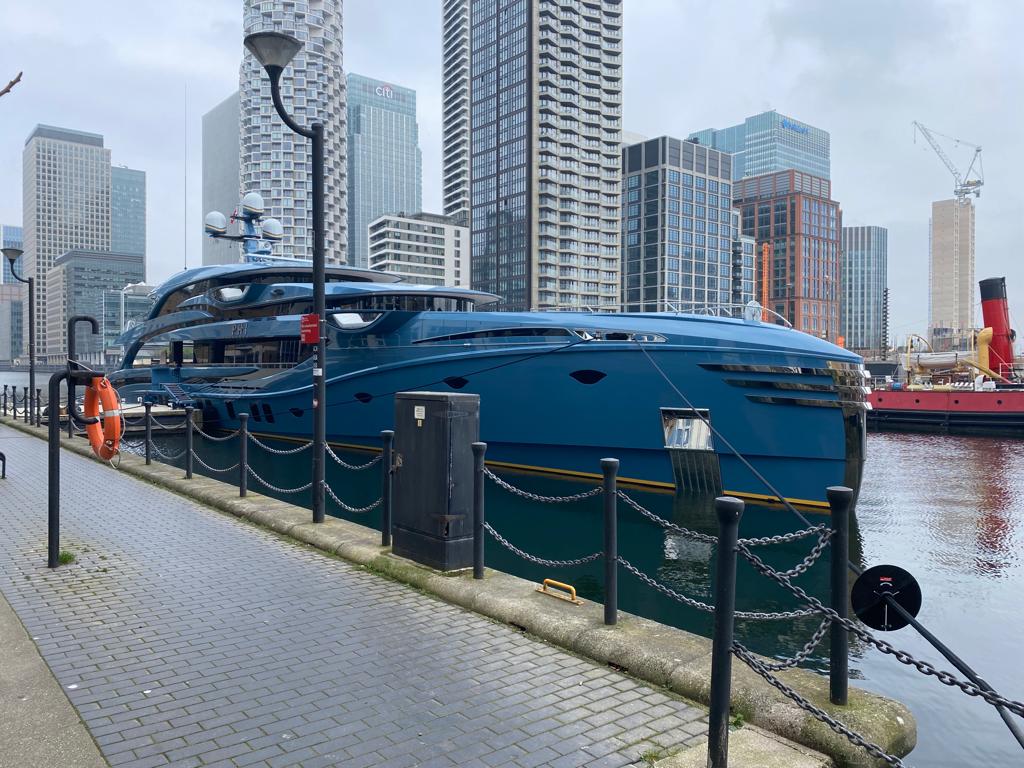 The vessel, Phi, is the third largest ever built by Royal Huisman, a prestigious Dutch-based yacht-building company. Amenities onboard include an infinite wine cellar and a fresh-water swimming pool. (Photo: NCA, Twitter, License)According to a press release from the National Crime Agency (NCA), this is the first superyacht to have ever been detained in U.K. waters. The discovery of the superyacht is the result of a multi-agency effort including NCA’s Combating Kleptocracy Cell and the Border Force Maritime Intelligence Bureau.

“Today we’ve detained a 38 million pound superyacht and turned an icon of Russia’s power and wealth into a clear and stark warning to Putin and his cronies,” said Grant Shapps, U.K.’s Transport Secretary.

The vessel, Phi, is the third largest ever built by Royal Huisman, a prestigious Dutch-based yacht-building company. Amenities onboard include an infinite wine cellar and a fresh-water swimming pool.

According to NCA, the ship is registered in St. Kitts and Nevis and flies a Maltese flag to cover its origins.

On Wednesday, the Financial Times (FT) identified the owner of the superyacht as Vitaly Vasilievich Kochetkov. Kochetkov is the founder of Motiv Telecom, a small mobile phone network operating in the Urals region.

In addition to being the owner of Phi, Kochetkov owns another superyacht, Aurelia, which is currently moored in Porto di Imperia in Italy. It also flies a Maltese flag.

Law enforcement agencies in the U.K. have previously reported that they detained the ship as part of the sanctions against Russia, but Kochetkov is not on any sanctions list. They did not name the owner of the yacht, saying only that the ship belonged to a "Russian businessman".

A government source for the FT claims that the yacht was once owned by a man named Sergei Georgievich Naumenko.

The FT notes that, contrary to government claims that Phi's owner was close to Putin, Kochetkov likely had serious problems with Russian authorities. At the beginning of 2021, a criminal case was opened in Russia on charges of tax evasion against the parent company of the Motiv telecommunications group Ekaterinburg-2000.

A member of the crew of the yacht told the FT that immediately after the appearance of the police on the yacht, British Minister of Transport Grant Shepps arrived with television journalists. He said that with his comments Schepps was "attracting attention" and his claim that the Maltese registration of the boat was part of an attempt to hide ownership was "simply idiotic".

Since the Russian invasion of Ukraine, assets including yachts belonging to Russian oligarchs have been seized globally.

In early March, OCCRP reported on a wave of confiscated yachts.

Sanctions implemented by the U.S., U.K, EU, and Canada have targeted Russian officials, businessmen and entities. As soon as the list of sanctions had been announced, Russian tycoons' superyachts were seen heading to the Maldives and the Seychelles.

These sanctions are already having an impact on the Russian economy, and an increasing number of nations and companies are ceasing their business dealings with the Russian Federation.